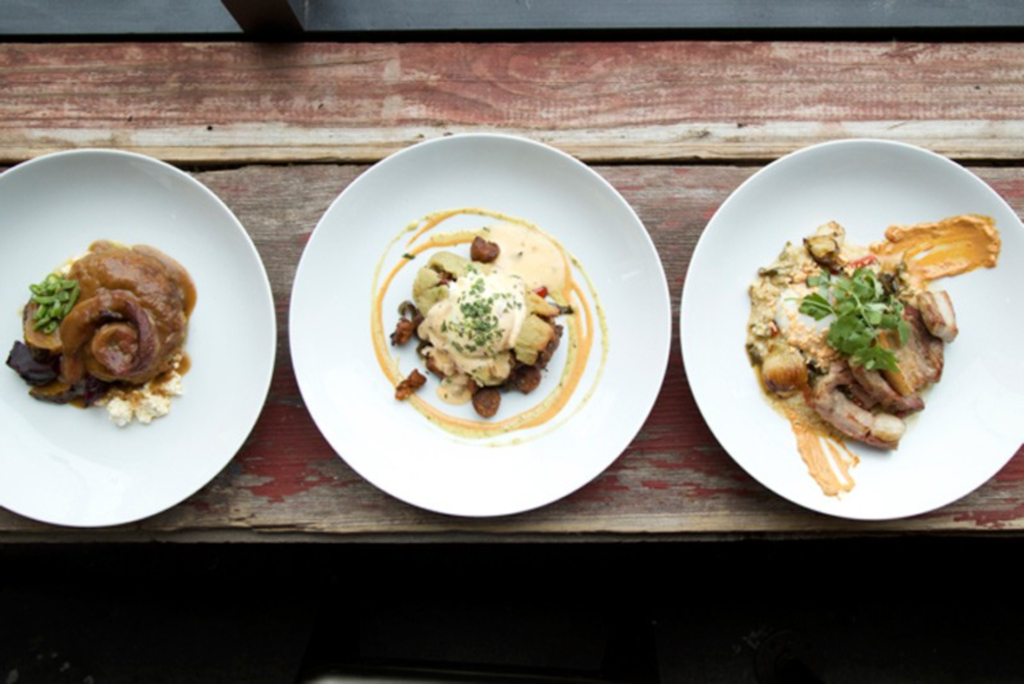 Earlier this year, Alex Pope finished transforming the prime Westport address formerly known as Bridger’s Bottle Shop, a beer retailer and bar — with a minimalist kitchen and sandwich counter, also created by Pope, called Preservation Market — into the full-service restaurant Local Pig. The midtown venue shares its name with the East Bottoms butcher shop that Pope opened three years ago, and a few people are still apt to confuse the two joints.

In both places, the focus is squarely on meat, especially as it figures into sandwiches, pâtés and charcuterie. (There’s also the occasional smoked pig’s head.) In Westport, though, the feel is more night-ready; Local Pig here is part saloon and part clubhouse, if the club in question is one full of old-­fashioned butchers in blood-stained aprons. There are refrigerated meat cases and a variety of trimmed meats and house-made sausages, and the atmosphere recalls this neighborhood’s history. This place for cold brews and hot meats would have been just as effective in 1915 as it is today.

Just as the parking lot across the street is being torn up to make way for an influx of chain operations, Pope has taken a handful of classic ideas and revived them with a flair approaching artistry. Not even everyone predisposed to loving a place called Local Pig is going to want to share a hog’s head, pickles and a baguette every time there’s a boys’ night out, but there’s more than enough here for pretty much every taste. And you won’t find a better meal right now than the Pig’s roast chicken or bacon-wrapped slices of pork tenderloin; when the food works this well, the comfortably relaxed urban setting is mere gravy.

The only drawback to Pope’s pork palace is that you must avoid making a pig of yourself from his list of 14 starters and as many entrees. Having tasted more than a few of them, I can tell you that nearly all are executed with style — and made to fill you up. A plate of fresh, oven-roasted asparagus, lolling on a swath of punchy, Sriracha-seasoned ricotta cheese, is one of the best dishes I’ve tasted this spring.

Spring is the operative word: Pope introduced his latest menu just a couple of weeks ago, and he’s still tweaking it.

“We needed to find out what the customers in Westport were going to respond to,” Pope says. “We had started, back in the Preservation Market days, with more sandwiches than entrees, but we’re more than a sandwich shop. Still, we have a limited kitchen. There’s no flat top or burners in the back. We have to be very creative.”

Pope and executive chef Mark Dandurand have succeeded admirably on this count. These are not the kinds of dishes found on other menus in town, and it’s impressive to see how many artful meals are coming out of this nontraditional kitchen (in a timely fashion, I might add). The selection is meat-heavy, though a vegetarian could assemble a satisfying array of sharable meatless plates from the starter choices: whipped goat cheese with a distinctive blackberry-sage jam, a hunk of Green Dirt Farm’s sheep’s-milk cheese with fresh strawberries and tarra­gon, and that flavorful asparagus).

One way to try a few meats at once is to order the charcuterie plate, a sexy spread of sliced meats and cheeses. It’s a choice version of a venerable saloon notion. And Dandurand’s chopped beef tartare (it looks like a fat, uncooked burger, as it should) tastes appealingly of preserved lemon and coriander, granting the dish a beyond-saloon sophistication.

Two of the holdover dishes from the previous menu are somewhat over-the-top variations on familiar themes. A lamb potpie looks vaguely like a savory kolach, with a mix of chopped cooked lamb and lamb bacon wrapped in a thin sheath of pastry, baked and sided with roasted beets and crispy snap peas. Pope’s play on shepherd’s pie, constructed with braised beef, spuds and cheddar cheese, won’t be immediately recognizable to those who might desire the kind of hearty meat pie served in local pubs, but it has style and substance to spare and a touch of whimsy.

The short-rib burger, topped with a poached egg, is like no other bar burger in Westport, rich to the point of lusciousness. It probably goes better with a good scotch than it does with beer, though the perfect brew is certainly available here.

A couple of the sandwich choices from the Preservation Market menu are still featured at Local Pig, including a lamb-meatball hoagie presented with salty feta, sweet orange segments and sweet-sour house-made pickles. It’s the very best holdover from the days when Preservation Market’s calling card was preserved garden vegetables.

Pope and Dandurand are still experimenting a lot with this restaurant’s dessert selections (which might explain the few choices and why the place sometimes runs out of sweets by midweek). The bread pudding, topped with Shatto’s caramel ice cream, is presented as slices of chilled pastry rather than the more familiar custardy clump, but it’s quite good. And a warm blackberry cobbler, smothered in oat streusel, is a class act.

Bridger’s Bottle Shop was more about the brews than it was about the food, and Local Pig has turned the tables and put a lot more attention on the culinary side of the equation. That’s smart, and Pope’s progress is apparent from the moment you’re seated and warmly treated by a slickly trained staff. It’s a noisy dining room but one that’s impossible not to like — a lot. A number of the men here, on both sides of the counter, are burly and bearded (you could say that Local Pig has succeeded in putting the butch back in butcher shop), and by the time you’re done with a meal here, you kind of want a beard and a belly, too.