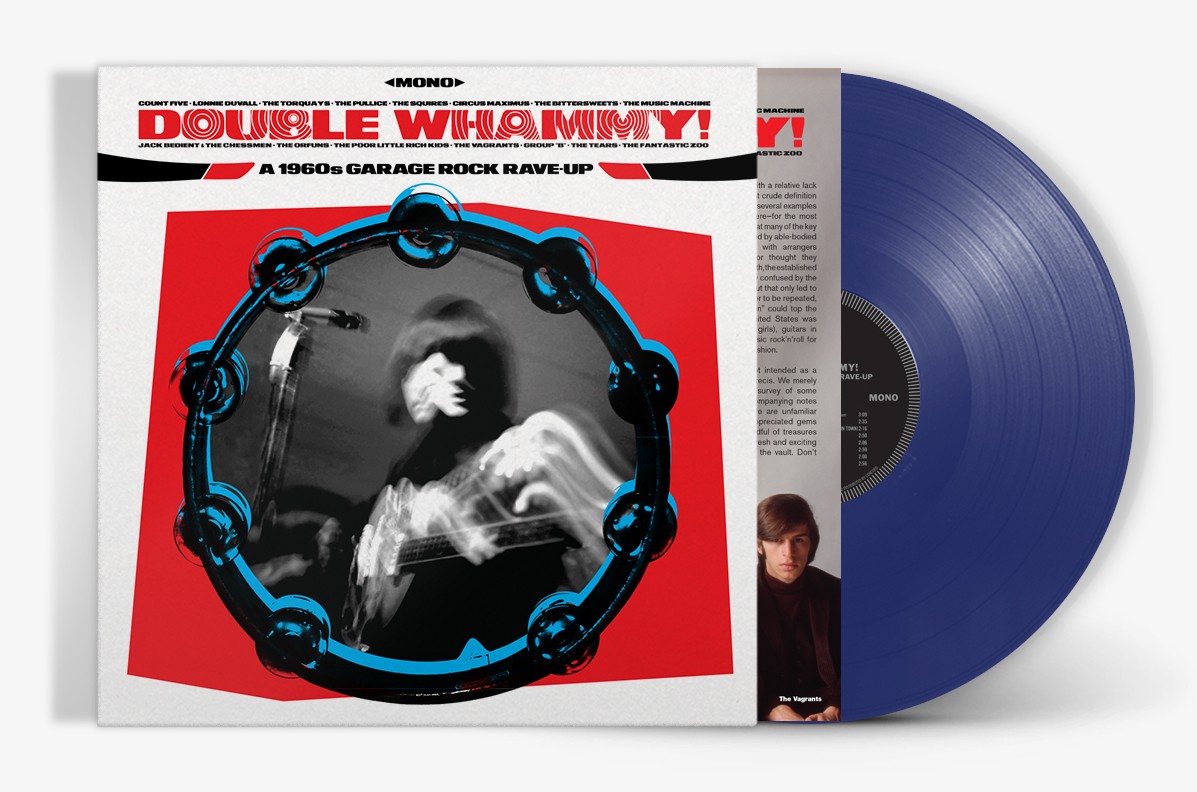 Reissue label Craft Recordings is noted for their high-quality vinyl offerings of classic albums, both new and old. In recent years, they’ve reissued everything from punk act the Vandals to prog-metal band Between the Buried and Me to the soundtrack to It’s the Great Pumpkin, Charlie Brown, and everything in between. The real gems of the label come from the vaults of the various labels to which Craft, and their owners, Concord Records, now own the rights.

Craft’s deep dives into the world of independent disco releases on the likes of For Discos Only: Indie Dance Music From Fantasy & Vanguard Records (1976–1981) and the proto-soul of Jesus Rocked The Jukebox: Small Group Black Gospel (1951-1965) represent what the label does best: collating otherwise hard-to-find obscure gems and putting them into context with superb liner notes. Their upcoming release for the third Record Store Day drop of the year this coming Saturday, October 24, is Double Whammy! A 1960s Garage Rock Rave-Up.

Compiled, curated, and restored by journalist and music aficionado Alec Palao, it’s a fantastic slew of well-known and otherwise unknown garage rockers from the vaults of Stax, Original Sound, Vanguard, and Fantasy Records, and features an unreleased cut from the Music Machine, along with an alternate take of the Count Five’s classic, “Psychotic Reaction.”

I spoke by phone with Palao about the work required to craft such a comp.

I own stacks and stacks of compilations here on the shelves in my office, so I’m curious as to how the process of putting something like this together starts. Do you go in with a stack of songs that you’re looking to put together or are you digging through vaults to find some of this unreleased material?

Yes, all of the above. For this specific compilation, I can give you a little bit of background. Last year, I proposed doing three albums for Craft of mid-’60s pop and rock that they had in their vaults. They liked the idea and so, we planned them as a sort of trifecta. The first one came out last year for Record Store Day, which was called Poppies and that was more kind of psychedelic-type stuff and Double Whammy is the second of the three. Hopefully, I’ll get to do the third one, which will be more psychedelic pop or sunshine pop–much more produced type stuff.

Double Whammy: my brief to myself was “garage rock.” As far as what it contains, I already knew exactly what I was gonna put on it because even though Craft or Concord owns these the catalogs from which these songs are drawn, I’d already worked on these catalogs for other labels, principally Ace Records in Britain. I’ve done full collections of some of these groups. like The Music Machine and The Count Five and used other tracks elsewhere and also spent a lot of time digging in the vaults of all of these companies and so, therefore I was very familiar a with what they had and knew of these little gems and different versions of things and stuff that was in there.

My pitch to them, as it has been with a lot of record labels in recent times, is–because, especially with Covid and everything else–everyone’s looking backward because there’s nothing to look forward to. So, if you’re a company that has a large back catalog, such as Conchord does, it’s like, “Well, what do we do with our assets?”

That’s where people like me come along and say, “I know what you’ve got on your vault. I’ve already accessed it in the past or I can access it now. Let me put these things together.” From the point of view of the genre, 1960s garage rock is probably one of the central sort of forms of rock and roll that I cherish and have since the punk rock days when I first heard the original Nuggets album. I’ve done many, many reissues of this sort of genre and these kinds of artists over the years so it’s compiled before I even think for 30 seconds. I’ve already got it all done because it’s basically intuitive for me.

Even though it’s a genre showcase, I still very much feel that I’m in the entertainment industry, so I wanted to make a nicely programmed, punchy two sides of vinyl. From that point of view, it’s not just the programming, but also making sure that the quality of the audio is the very best it can be. I’m a little unusual in the catalog world because, as well as compiling stuff and researching it and doing the notes and all that kind of stuff, I also do all the transfers. All the audio on there was translated by me and if it had been remixed, I did that too.

I pretty much did all of that outside of the final cutting of the master. That’s very important for me too: to be able to showcase this music in the best quality, because there’s always been a kind of aesthetic around, particularly, garage rock where it’s like, “Oh, it’s going to sound scratchy,” which I don’t agree with. To me, this is some of the most powerful rock and roll you ever heard, so it should be loud and proud.

At best, I think I’m a dilettante in terms of garage rock knowledge, but I definitely recognized some of the names on this compilation. I think that that’s sort of the joy of being able to mine garage rock, though. Even given Nuggets and Pebbles and the numerous compilations that Ace and Rhino have put out, and the fact that all of these labels that have dug and dug and dug, we’re in 2020 and there are several unreleased on Double Whammy. How do you come to find the unreleased tracks? Is this just through your digging–not just in the vaults when you’re working on other things, but when you’re doing research, do you discover that a list of what an act recorded and you’re like, “Oh, I’ve never heard that particular track?”

Yes, that happens, but I would say that all the unreleased things on this package came about because I was fortunate enough to have access–because access is a key thing, Nick, in these sorts of situations. For example, if you let me loose in the Sony vault or Universal vault, I’d find loads of great stuff that I wouldn’t have known about, but I need to be able to do that in order to find it. In the case of the things that are on Double Whammy, I had access to all of these vaults and worked a lot with Fantasy before they got sold to Concord. Their vault actually used to be near here, where I live in the Bay Area and I could actually check out tapes and bring them home to copy.

Having that ability to actually play a tape all the way through: it might be mostly crap, but right at the end, there’s that wonderful gem that just sort of appears. Very fortuitous. If you have that access, you can find those sorts of things. I never would have found the different ending of “Psychotic Reaction” if I hadn’t had access to the four-track multitrack tape. I had access because that used to be owned by Original Sound and they would never let anybody go to their studio to hear stuff. They’d always copy it and give it to you.

I said, “Well, I would like to go through all the session tapes,” and they said, “That’s going to cost a getting an engineer,” but I said, “I can do that. I can operate a tape machine,” and they said, “Really? Go ahead.” They left me in the studio for days at the time and I could go through every single tape and find the stuff that would have been logistically difficult to access, even if I might have seen it on a list, as you mentioned, but actually, just because it’s on a list and it’s unreleased, doesn’t mean it’s any good.

There’s been plenty of times when I’ve gotten salivating over, “Wow! This is unreleased,” and I play it and it’s a backing track or it’s one of the worst pieces of schlock you ever heard, so finding a gem is a bit like panning for gold. You have to know where to go and you have to invest time–and it could be a lot. You have to be patient, but by spending time and just going through things carefully–sifting through them–this is where these things make themselves apparent, and it can be very exciting to come across all these sorts of things. I’ve been you know very fortunate over the years in all sorts of different catalogs, finding remarkable things.

Just to give you a quick example, I’ve been working recently with Shel Talmy, who’s the American producer that lived in England and produced the Kinks and the Who. He produced “My Generation,” “You Really Got Me,” and everything. He also worked with David Bowie, briefly, in 1965 and I was going through his stuff one day and I said, “Hey, do you have any old lacquers and stuff?” He said, “I don’t know,” and I looked through his cupboard, pulled out a few things, and there’s an acetate with five completely unreleased David Bowie songs that I never would have known about it, had I not asked that question and actually pulled it out and then been allowed to play it.

So, there’s a serendipitous aspect to finding these things, but that’s one of the great joys of really being able to go through the nuts and bolts of how these records were made: the session tapes, all the different mixes, and really being able to do a thorough survey of what is available. That’s where you’ll come up with the goods.

Double Whammy! A 1960s Garage Rock Rave-Up is out this Saturday, October 24, from Craft Recordings as part of the Record Store Day drops series.