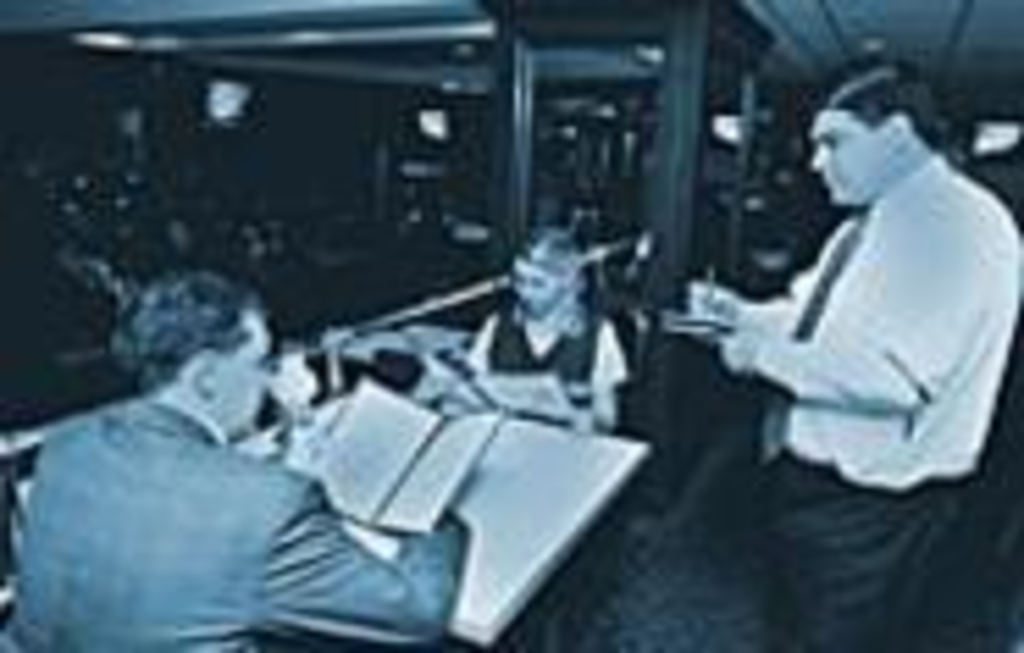 I ate dinner the other night in the Twilight Zone.

The time? 7 on a Friday night. The place? Aladdin’s Restaurant in the Holiday Inn Citi Centre. There, the dining room was empty, except for the table I shared with my dining companion, who was quite happy with the solitude: “It’s like having our own private dining room,” he said.

But it wasn’t exactly private. If I turned my head in one direction, I could see Elton John. In another direction, I came face to face with Ricky Martin. And behind me was billionaire Bill Gates. Not in the flesh, unfortunately, but larger-than-life on one of the half-dozen TV screens mounted throughout the dimly lit dining room. The images are doubled, thanks to the shiny mirrors mounted on old wooden columns in the center of the room. From my seat, I could look away from the table and see ESPN out of one eye and CNN out of the other. All played simultaneously and silently; the restaurant’s sound system was reserved for Top 40 rock songs performed a shade too loud by Whitney, Jewel, and Mariah.

When the young waiter, formally attired in a starched white shirt and black pants, came over with two plastic-covered menus, my friend Bob said, “There are so many TVs in here. Is this place also a sports bar?”

“That hasn’t been defined for me yet,” said the server. “I don’t know if we’re a sports bar yet.”

That was not the first unanswered question of the night concerning the many mysteries of the Aladdin Restaurant, nor was it the last. Before setting out for dinner, I called the hotel restaurant at 5 that night to ask a few questions. Were reservations necessary? No. Was there free parking? No.

“There’s parking across the street,” said the cheerful voice at the other end of the line. “It costs $3 an hour.”

And was there a special dish that evening?

“There will be, but we haven’t come up with it yet,” the voice said.

With those kind of reassurances, why should I have been surprised that the dining room was nearly empty at our arrival? Sure, at 7 p.m. there was one other couple in the room, but the two people soon finished their dinner and quickly vanished. Soon enough, it was just me, Bob, two waiters, and the TV sets. Where was everyone else?

Admittedly, there wasn’t much action on the streets of downtown that night. No conventioneers prowling around with laminated nametags on their jackets. No theatergoers streaming toward the Music Hall. In fact, we were able to easily find a free parking spot on the street a block or so from the Holiday Inn, passing the far more active Doubletree Hotel on the way.

Once we were seated at our little table in Aladdin’s, I looked at the menu cover, which features the image of a color postcard from 1932, when this hotel was the then-7-year-old Aladdin Hotel, billing itself as “the hotel with a personality!” In those days, the apartment hotel was one of the snazziest operations in the “up-to-date” Kansas City, complete with 265 rooms, most boasting individual kitchenettes, an open-air rooftop garden, and a lower-level basement dining room called the Zebra Room, which could be entered through a door off the dark alley between the hotel and the long-razed Gayety Theater.

“It was a dark place, more like a bar,” recalls veteran radio personality Walt Bodine. “A lot of the local politicians would hang out there. I don’t remember it ever being renowned for its food.”

Our server was even more informative. Pointing to a pair of brick arches with stucco walls that now cover the original alley doors, he said, “That’s where the politicians would come in to have dinner with their girlfriends and mistresses.”

Obviously, there was some monkey business going on in the more bustling days of the Zebra Room, which clearly had a lot more pizzazz in the 1930s than it does now as the forlorn Aladdin’s, with its dirty carpeting, undraped tables, and overwhelming air of sadness. It’s the dining room with no personality. The best way to describe the room is shabby genteel, although the long, narrow space evokes, as does the beautiful art deco architecture in the hotel’s marble-and-gilt lobby, a time when downtown Kansas City had real zest and excitement.

When the hotel was built in 1925, this stretch of downtown was vibrant, with big movie theaters and vaudeville houses. There’s still a tiny bit of action down here when there’s a show at the Music Hall or an event at Bartle Hall, but our server said he rarely saw much of the theater crowd venture into the dining room (even though the cast from a touring show playing at the Midland Theatre was staying at the hotel).

“I’ve been here a year now and don’t know why the theater crowd doesn’t come in,” he said, jotting down my appetizer request — spinach and artichoke dip ($4.99) — on his pad. “But they don’t.”

The Aladdin’s appetizer selection has all the usual suspects: chicken wings, fried mozzarella sticks, chicken tenders, potato skins, and onion rings. I don’t know what possessed me to choose the spinach and artichoke dip, other than the description: “spinach and artichokes topped with Monterey Jack cheese, served with tortilla chips, salsa, and sour cream.”

We knew there would be trouble when the dish arrived and the little bowl holding the salsa accompaniment was far bigger than the plastic ramekin containing the very sorriest version of a spinach dip (there wasn’t an artichoke to be seen in it) I’ve ever tasted. There was no visible cheese in the dish either, which was lukewarm, tasteless, and had the consistency of spinach soup mixed with a splash of milk. It all came with a handful of tortilla chips (because we were ravenous, we asked for more and ate them with the salsa, which tasted like the bottled variety) and a little dollop of sour cream.

When the waiter brought out the appetizer, he asked, “I guess you’ll want appetizer plates, huh?”

Huh? After I gave him a withering look, he raced right out with two little plates. He also took our dinner order: a 16-ounce Porterhouse steak ($14.99) for Bob and the smoked shrimp fettuccine ($13.99) for me. The shrimp dish is one of a half-dozen entrée items that are hickory-smoked in chef J.B. Tinner’s smoker (there’s also a smoked chicken, brisket, and pork baby back ribs).

The dinner entrées include a choice of soup or house salad and a “fresh roll and butter.” The roll and butter never materialized at our table, but the salads did, served with the dressings on the side, quivering in little plastic cups. The salads were standard issue: iceberg lettuce, a tomato wedge, fried croutons, and a couple of rings cut from a purple onion.

Dinner was far more exciting. I received a big plate of fettuccine swimming in a thick, Alfredo-style sauce, neatly topped with a chorus line of five smoked shrimp that were the color of curry and extraordinarily good.

Bob’s Porterhouse didn’t win any awards for looks — a thick, sizzling slab of beef it wasn’t — but he pronounced it “good, not great” and devoured every bit, although after a single nibble at the accompanying mashed potatoes, doused with glossy brown, gluey gravy, he refused to touch them again.

“I could grout a bathtub with it,” he grimaced.

The dessert selection boasts homemade cheesecake ($3.99) and Chocolate Suicide Cake ($3.99), but after the rich pasta, I was in no condition to end a meal so decadently. Instead I decided to return for lunch a few days later to check out the sweets.

I had wondered whether the restaurant would be livelier during the workweek, when it would make sense that downtown office workers would pile in for lunch. But no, on my second visit, the place was as deserted as it was the previous visit, with only one other table occupied, by two casually dressed men. Once again, there were more hotel employees in the place than guests. And there was a new mystery to unravel.

Our waiter arrived wearing a black cotton apron embroidered with “The Aladdin Beanery.” Beanery? When did it become a beanery?

“Does this place have a different name at lunch?” I asked the server.

He looked startled, as confused as if I had asked him to immediately name the capitals of all 50 states.

Later, the restaurant’s publicist, Pat Paton, told me: “The beanery concept is something we’re still tinkering with. It hasn’t been decided yet.”

There’s little I can say about our lunch, other than it was unmemorable and bean-free. My friend had a very decent club sandwich with hickory-smoked turkey ($5.49) and I had a very expensive and over-cooked cheeseburger ($6.49). And then there was the sliver of cheesecake, dense and rich, that was priced — scandalously, I thought — at $3.99 for a portion that vanished in five bites.

What would it take, I wondered, to make this little restaurant become more popular? The fare, simple and uncomplicated, is certainly no worse than the more expensive food served in the once-fancy dining room of another nearby downtown hotel. Once upon a time, back when the old Aladdin still had a rooftop garden (long roofed over) and the Muehlebach had live bands playing in the Terrace Grill, dining in hotels was glamorous and the food was first-rate. But people don’t tend to eat in hotels much anymore unless they’re staying in them.

The staff at the Holiday Inn Citi Centre is obviously trying hard to make something out of a long-neglected dining room (“We’re trying to get memorabilia from old downtown to decorate the room,” the pleasant catering manager told me), but improving the food would be a more logical first step. And if only someone could rub a magic “Aladdin’s lamp” to make it happen, this cozy room might find a focus and a purpose. The business cards list “fine cuisine.” Or is it a sports bar? A beanery? An afterthought? The place definitely needs a little magic.