Al Gore, a mass of talent and a four-floor hotel party close out Saturday at the Folk Alliance International Conference 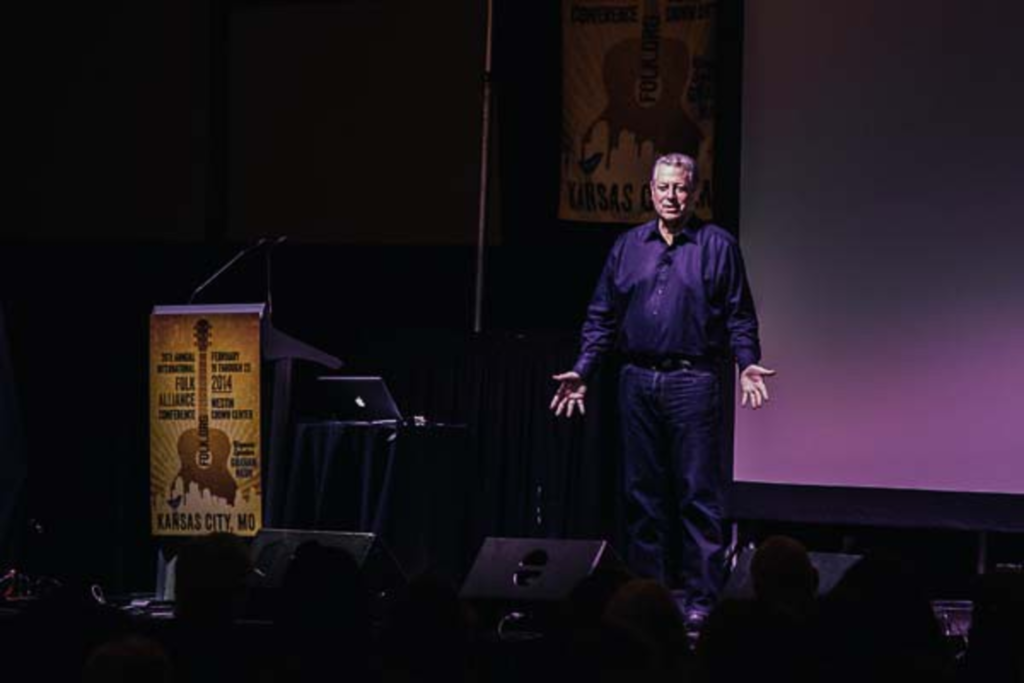 Even as the Westin’s conference ballroom filled to capacity for Al Gore’s climate-change presentation, it was not immediately obvious why he was presenting a scientific-leaning climate presentation at a music conference.

One attendee carrying a guitar case walked by the long line of people waiting to go into the conference room, talking to his friend. “Who are they waiting for?”

“No shit,” said the guitar carrier.

Gore quickly addressed why this discussion of climate change was a good fit for the conference. (He also has a personal connection to one of the conference’s organizers.) He explained that when he was a younger man in the 1960s, “folk music played a positive role in resolving the central question in the civil rights movement, as to what was truly right and truly wrong.” He hopes for the same with the issue of climate change. 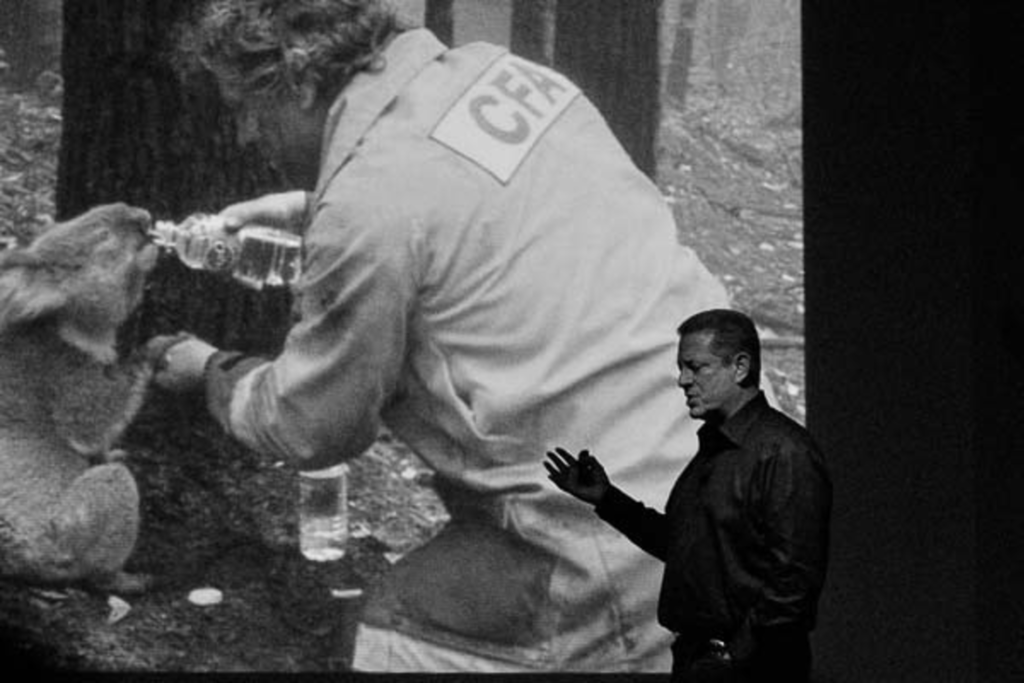 Gore’s current presentation shares only a couple of slides from An Inconvenient Truth – it has been updated to include new data and information about extreme weather events, many of which have happened since the film’s release. The atmosphere of our planet, apparently, is 4 percent more humid than it was 30 years ago. He discussed how the Earth’s increased humidity and increased temperatures contribute to the intensity of storms like Superstorm Sandy, which hit New York and New Jersey, and how the opposite problem of intense drought in the West and in other areas of the world will contribute to political instability and suffering. It was depressing and scary. But it also was an engrossing presentation. Normally I am unable to focus on any kind of slideshow for longer than three minutes – I just glaze over – but Gore was able to hold the room (and my desperately limited attention span) for more than 90 minutes.

The conference is a pleasure for a music fan – to see so many musicians crowding into conference rooms, playing in lobbies for walkers-by – and it’s an unusual experience in a corporate hotel environment, you could say. It’s wonderful, in an overwhelming way. 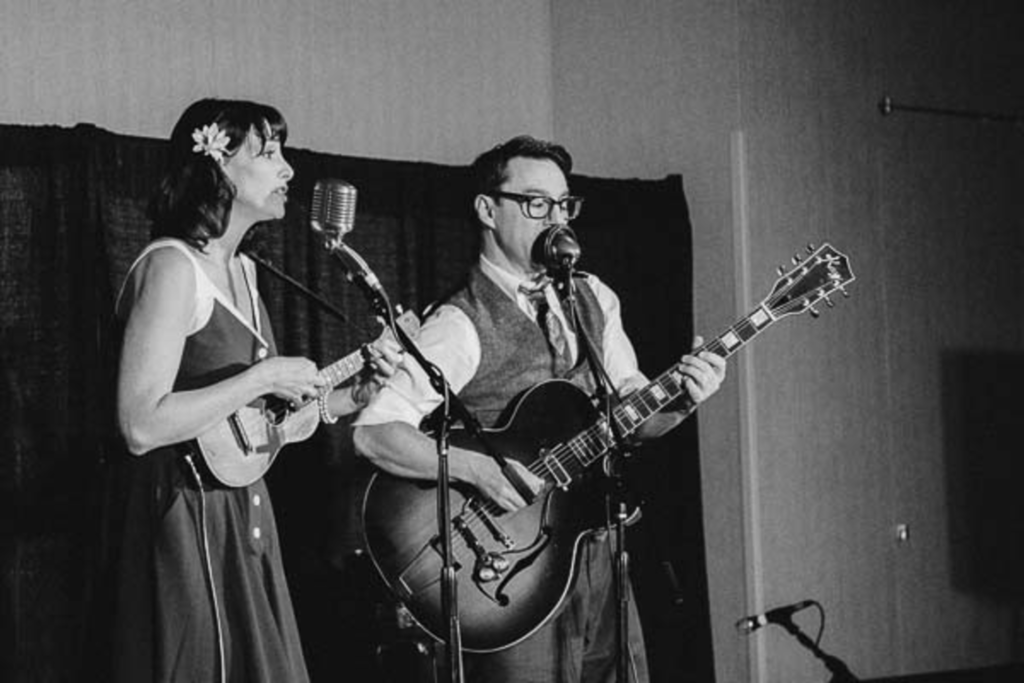 Our first act of the evening was Victor & Penny, a sweet duo from Kansas City that brings ukulele, jazz guitar, dual vocals and old-timey microphones to create that desirable, old-fashioned tinny sound.

Though Erin McCrane (formerly of Alacartoona) noted that her voice was raspy from a weekend of singing and yelling, she and bandmate Jeff Freling charmed the modest crowd. Freling’s dextrous picking on the jazz guitar earns high marks. Down the hall, Jeff Black, also from Kansas City, played to a packed Penn Valley room. Out in the hallway, Betse Ellis and Howard Iceberg quietly played together, seemingly just for their own pleasure. 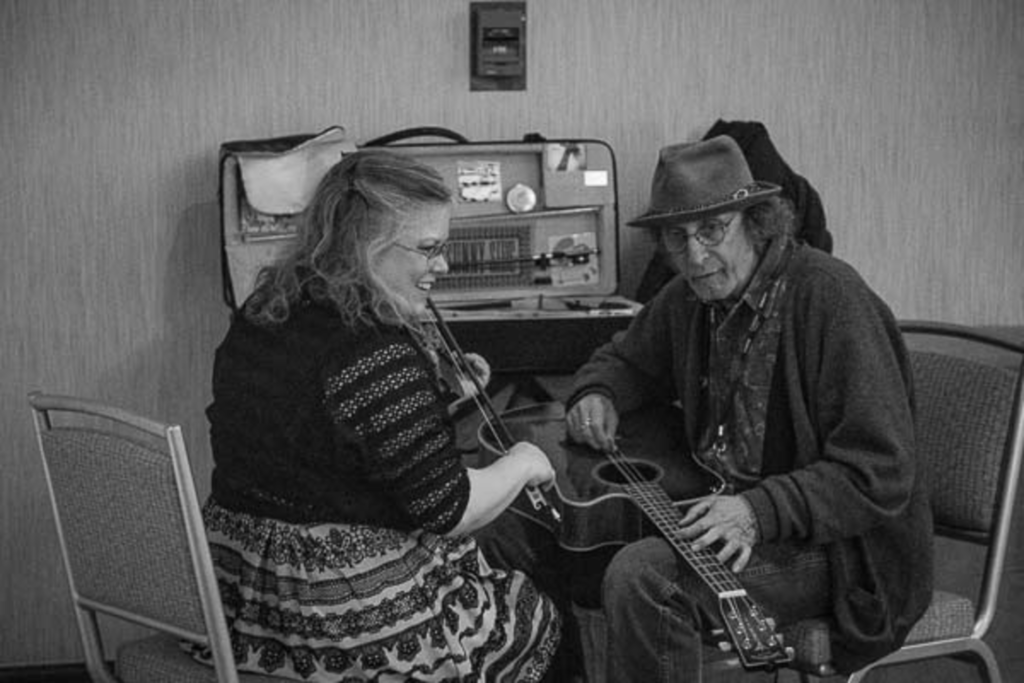 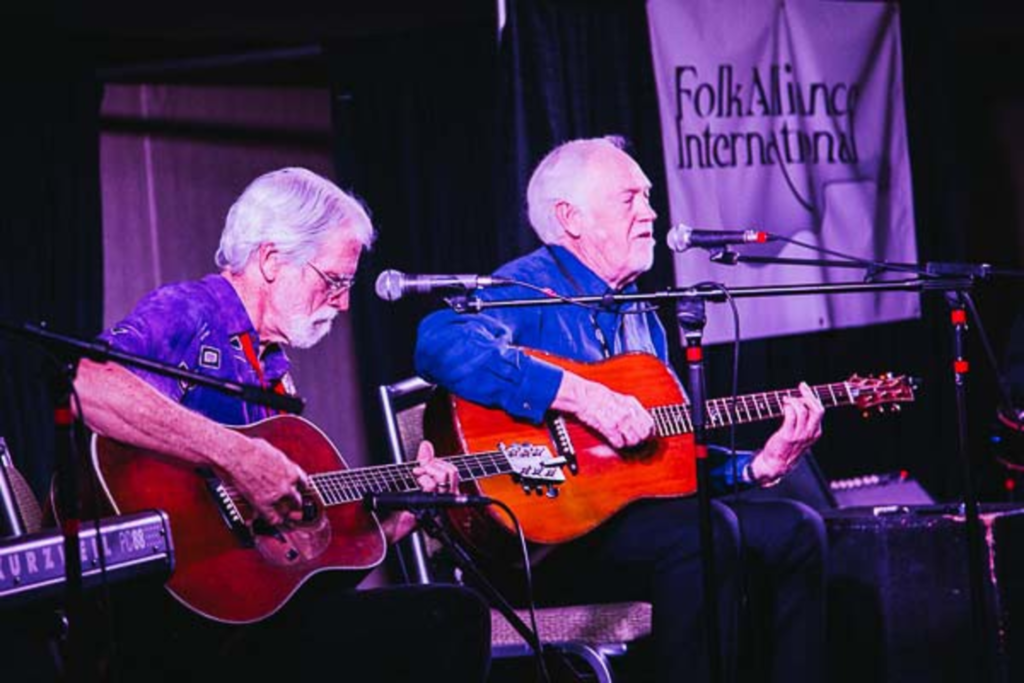 The most random surprise of the evening came from the Liberty Room. Remember Cohaagen from Total Recall (Arnold Schwarzenegger Total Recall)? Or Lieutenant Bogomil from Beverly Hills Cop? That’s Ronny Cox. Ronny Cox, in addition to popping up in two of my favorite ’80s films, has a folk band that sings songs about his home in New Mexico, about drovers in Australia, and hot water cornbread. And perhaps it shouldn’t have been surprising but it was – he’s quite a good musician, with a nice baritone and an excellent hand on the guitar. His band backed him up with an additional two guitars and a keyboard – and while I couldn’t quite get images of Bogomil yelling at Eddie Murphy out of my head, Cox’s natural storytelling ability and homespun rapport with the crowd nearly got me there. 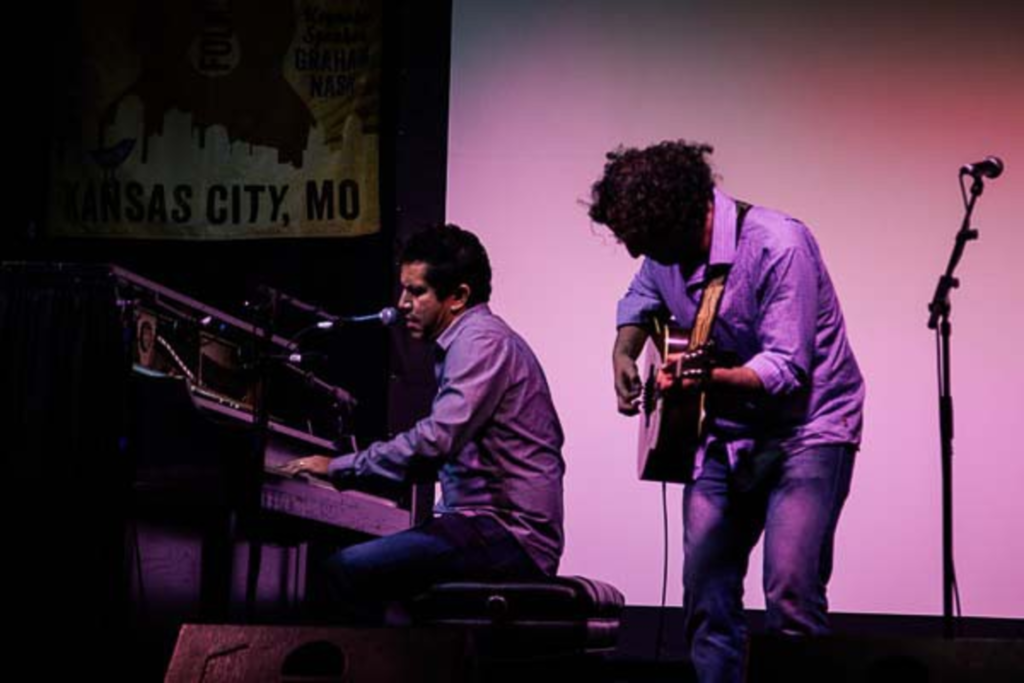 We also watched A.J. Croce, who is Jim Croce’s son. A.J. Croce kind of sounds like Randy Newman and looks like John Leguizamo. Croce has quite an interesting history in his own right apart from his connection to his father – he was temporarily blind as a child due to a brain tumor, and he now performs his own brand of blues-folk. The main ballroom had filled to about half capacity (a couple of hundred attendees) to see him perform – which was impressive, considering the attendance for other acts and the amount of other events happening simultaneously. The next performers in the main ballroom, Kevin and Dustin Welch, based out of Austin, sang about how Woody Guthrie, if he were alive today, would be a punk band. (I think they might be right.) 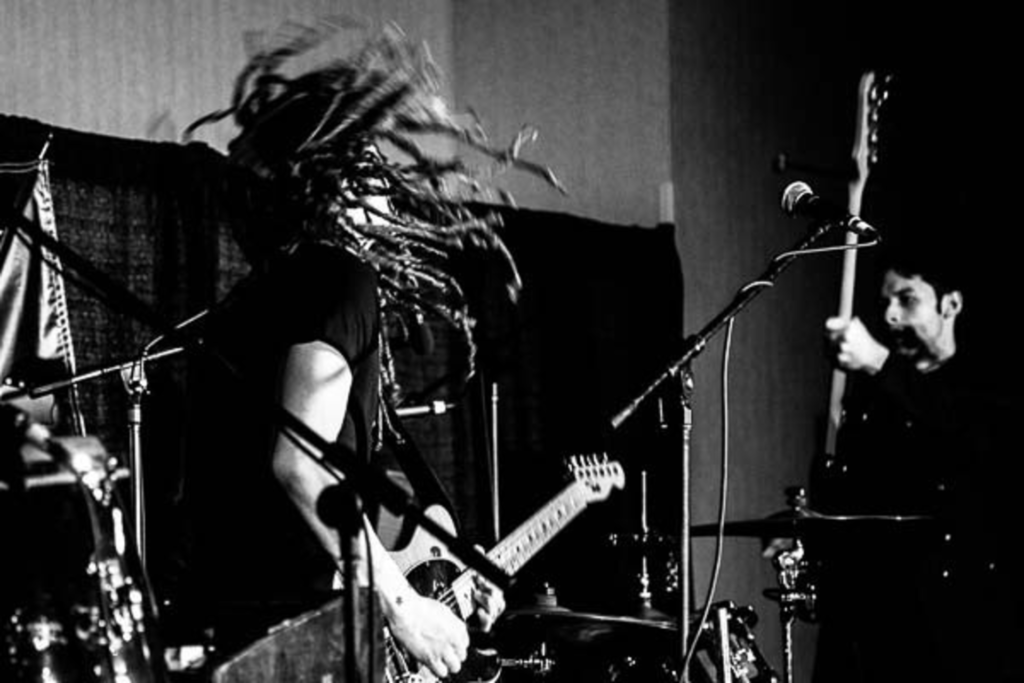 Making Movies closed out the night’s performance alley shows in the Pitch room – a nice representative of KC as they might just be the city’s most consistent and hardest-working act. The Latin-influenced percussion and high energy that are a regular hallmark of their performances was sort of a palate cleanser from the rest of the evening’s bluegrass and sweet singer-songwriter lineup.

The conference essentially breaks down into two parts each evening: the downstairs conference rooms, which are relatively well-organized and formal affairs, with vendor tables, clear performance set times and chairs and all. That stuff was all nice and interesting enough – but truly the best part of this conference was its late-night “private” showcases (private only to the extent that you did need a badge to get upstairs). 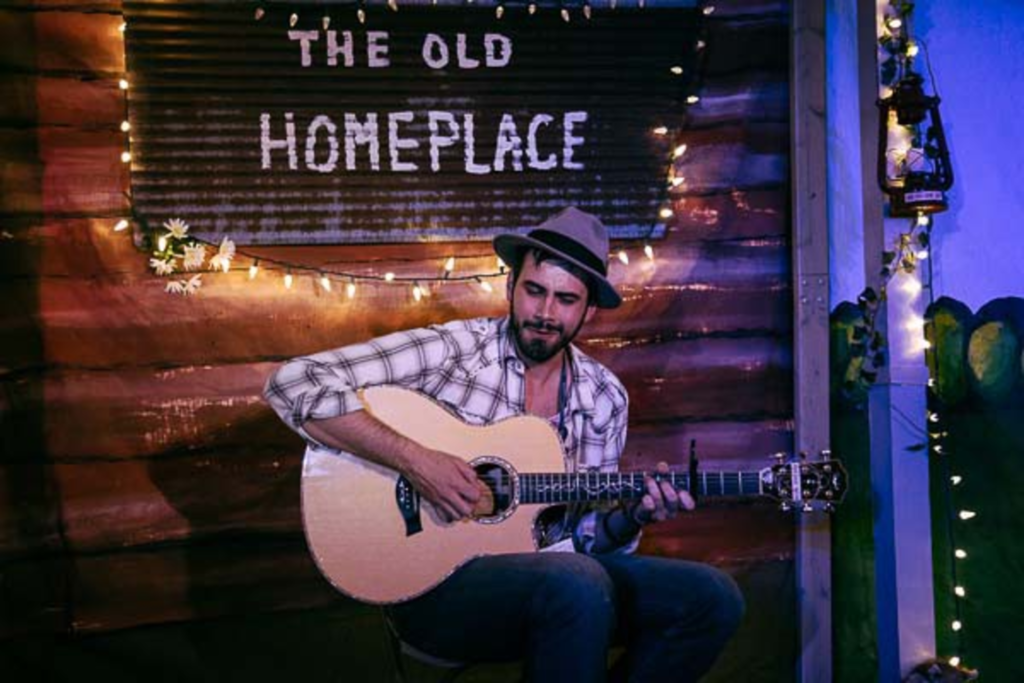 The conference reserved large room blocks on four floors of the hotel, and these blocks turned into Winfield Bluegrass Festival-style performance alleys, with deep, crowded hallways and performances occurring in what seemed like every third room. This atmosphere was kind of like walking around in that hotel scene from Almost Famous, without the groupies or overly obvious drug use, but with streams of people and music emanating from what felt like everywhere. In the hotel rooms, hotel beds were pushed up against the wall and stacked. Vignettes like elaborate Winfield camping setups were built. Most rooms were comfortably full. 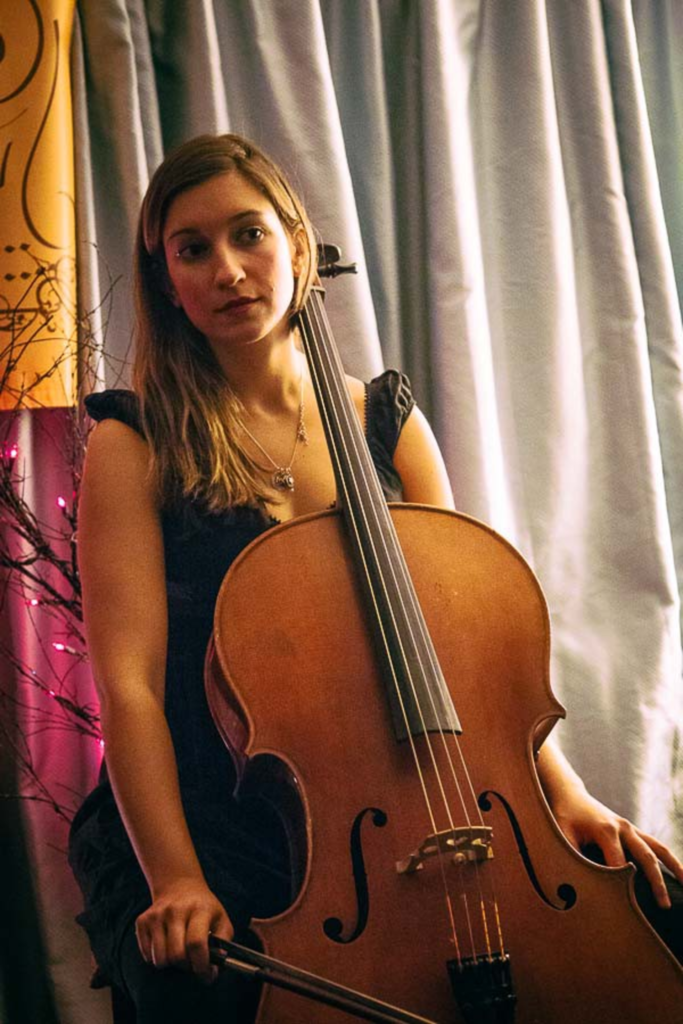 The highlight of the night by far were two short performances from Harpeth Rising, a female trio from Nashville named for “the small but powerful river running through Nashville,” according to violinist Jordana Greenberg. The three met while in the classical music program at the University of Illinois, and have written beautifully complex and intricate folk featuring two- and three-part harmonies on top of violin, cello and banjo. Their performance of the song ‘In the Wheelhouse Now’ was positively stirring.

While the party surely went longer into the night, Harpeth Rising seemed like a good closer. It was a highly satisfying end to a long, folky weekend. And while that was probably enough folk to satisfy our wants for the near (or even long) future, Kansas City is fortunate to be hosting FAI again next year.