Tuesday’s hearing offered a preview of education issues that may surface this upcoming legislative session, with critical race theory once again being discussed. 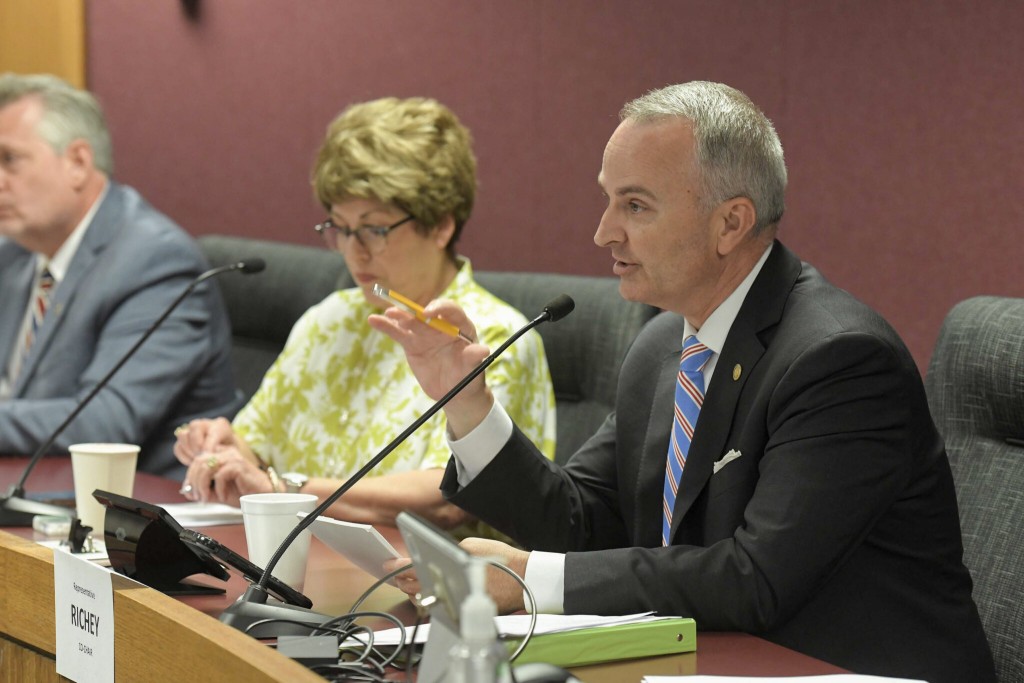 Missouri lawmakers trained their focus Tuesday on how school boards interact with the public and the ways in which history is taught in schools.

For over three hours, the Joint Committee on Education discussed how social studies curriculum makes its way into the classroom, raising questions about whether the Sept. 11 attacks are taught and once again debating whether critical race theory is present.

“Missouri’s history education is a bit anemic,” said Rep. Doug Richey, an Excelsior Springs Republican and chair of the committee. “We are not teaching history in a way that is as robust as it ought to be, in my estimation.”

Tuesday’s hearing primarily focused on the learning standards that outline the concepts that students must be taught within social studies. There are upwards of 600 learning standards overall, said Tracy Hinds, the Missouri Department of Elementary and Secondary Education’s deputy commissioner for the division of learning services.

State law stipulates that anytime learning standards are to be changed, workgroups that include parents and education professionals — some of which are appointed by state lawmakers — must be convened to develop and recommend any changes.

The state’s social studies learning standards were most recently revised in 2016, said Dixie Grupe, DESE’s director of social studies. While standards are set on a state level, decisions regarding the curriculum used to teach those standards are ultimately up to school districts themselves to decide — a key tenant of Missouri’s local control mantra, Hinds said.

“Having government censor what is or what is not taught can be a slippery slope, and is one that (the legislature) traditionally has worked to avoid,” Hinds said.

Missouri high school students must pass the equivalent of one semester learning about the branches of government and electoral processes, pass tests regarding the U.S. and Missouri constitutions and earn two additional social studies credits. 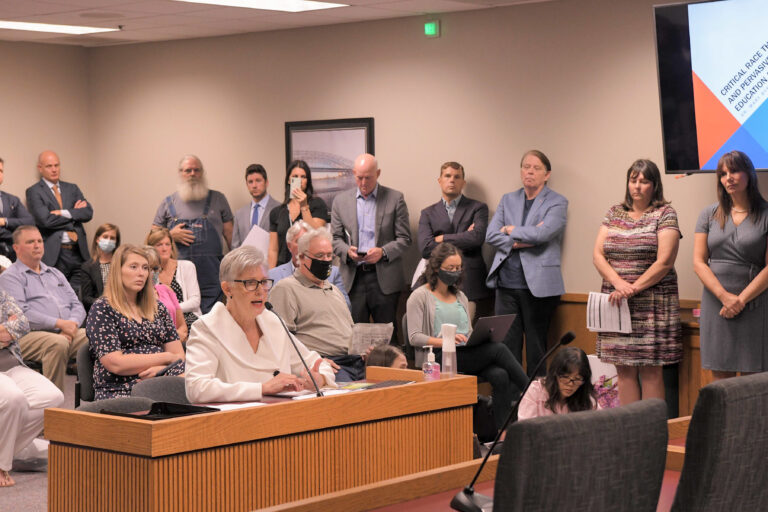 U.S. history courses generally cover the founding of the U.S. to 1870 or from 1870 to present, Grupe said. Students can also take world history, advanced placement courses or other options schools may offer.

But Richey raised concerns that depending on the courses they take, students may miss learning in-depth about key events like the Civil War, and said he feared ultimately the current learning standards may incentivize districts to teach only what will show up on standardized tests.

Sen. Jill Schupp, a Democrat from Creve Coeur and former teacher, said with only so many hours in a day, districts have to make decisions about what subject areas to cover. If learning standards need to be updated, then lawmakers can assess whether it would be reasonable to convene workgroups again for certain subjects, Schupp said.

With next year’s legislative session fast approaching, Tuesday’s hearing offered a glimpse at education issues that may arise. And discussion of teaching of history also delved into the perennial topic of critical race theory in the classroom.

Despite hearing from former teachers that critical race theory is largely not taught at the K-12 level in Missouri schools and the Department of Elementary and Secondary echoing that fact — opponents of the academic concept and some lawmakers have insisted the concept is in schools today.

Experts have said critical race theory, which is intended to acknowledge how racial disparities are embedded in U.S history and society, is being misconstrued by conservative lawmakers who have sought to ban it.

This past legislative session, attempts to bar critical race theory or the The New York Times’ 1619 Project failed to pass in Missouri. 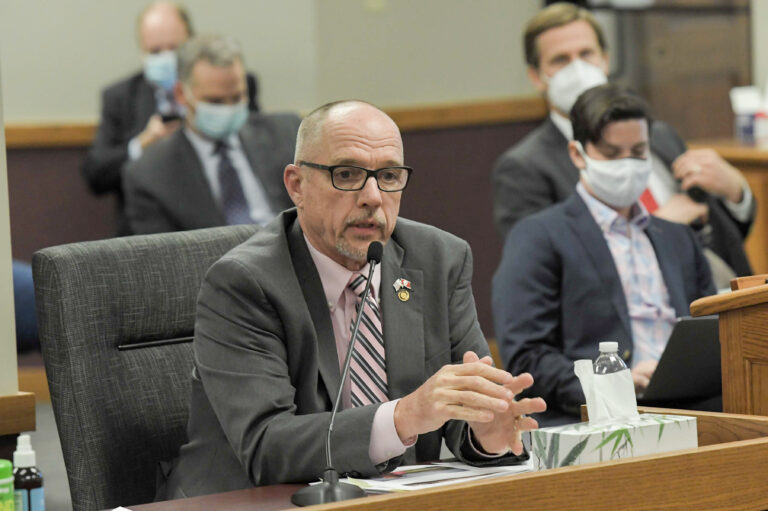 When asked whether critical race theory would be appropriately deployed in a K-12 context, Andrew Bolger, the director of The Keeter Center for Character Education at the College of the Ozarks, said he didn’t feel critical theory should be applied in the K-12 setting, posing: “Would you give a scalpel to a kindergartner?”

“I think people even in this room who are trying to figure out what direction this legislative session will take, may be using the same words and meaning different things,” Schupp said, regarding the use of critical theory and critical race theory being used interchangeably.

Tuesday’s hearing also focused on the topic of school boards, whose meetings nationwide have become increasingly hostile as topics of diversity in the classroom, mask mandates and more recently removing books from school libraries have dominated discussions.

Under state law, elected school board members must receive training on various policies and laws, which the Missouri School Boards’ Association, a statewide nonprofit that represents school boards, offers for free to both members and nonmembers.

But some state lawmakers argued that school board members’ attempt to be cautious about not violating various open meeting laws, like the state’s Sunshine Law, instead comes off as parents being ignored.

“People want to be heard,” Sen. Cindy O’Laughlin, a Shelbina Republican and co-chair of the committee said, later adding: “And we need to give parents, who are after all the people paying for the education, the opportunity to provide input.”

Rep. Chuck Basye, R-Rocheport, said he’s experienced roadblocks firsthand trying to get items added to the Columbia Board of Education’s agenda over the last two months and plans to file legislation this upcoming session that would ensure members of the public can have specific items heard and addressed by school boards.

“There’s no response, no interaction, you never hear anything else,” Basye said of public comment during school board meetings. “It’s just a venting session, essentially what it is.”

Basye has recently tussled with Columbia Public schools over materials used in curriculum, including a music video by Donald Glover, who goes by the stage name Childish Gambino. Basye, who has previously filed legislation that would allow for school board members to be recalled, has gone as far as calling for the district superintendent to resign.

Michelle Baumstark, a spokeswoman for Columbia Public Schools, said the district has responded to each of Basye’s requests and has offered for Basye to meet with CPS Superintendent Brian Yearwood.

According to emails provided to The Independent, Basye most recently requested that the topics of critical race theory and the 1619 Project be among those added to the agenda of the board’s upcoming meeting. In July, Columbia’s Board of Education approved a 1619 Education Project grant to facilitate teachers developing resources to explore issues of racial justice.

Because the board is not considering the adoption of curriculum regarding either topic, “the district administration is not recommending adding these items to the Board’s agenda for discussion or consideration,” Yearwood wrote.

Schupp said she remembers feeling frustrated at not always being able to address questions during public comment. But she stressed that policies are in place for a reason, including being clear about when items are up for public discussion in order to keep the public’s trust.

“We don’t want to put them in a position,” Schupp said of school board members, “where they’re doing something that the public as a whole doesn’t know about.”