One lawmaker who voted against the more sweeping bill said he did so in part out of frustration with the Senate. 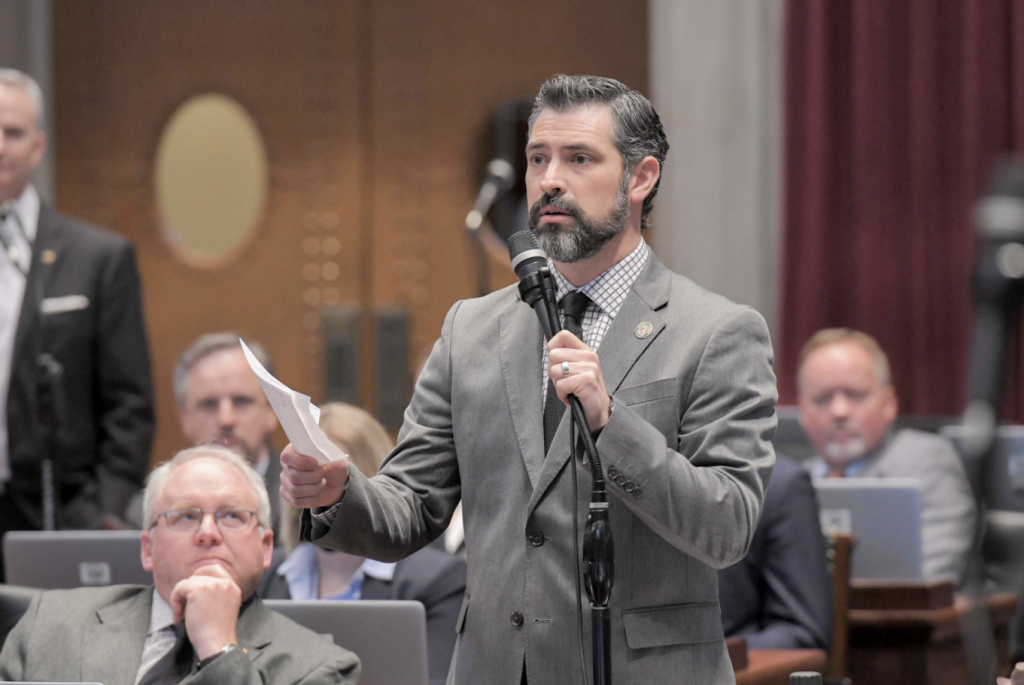 After voting down a sweeping bill to shield businesses from most COVID-19 related lawsuits Monday night, House lawmakers have pinned their hopes on a much more narrow version.

Rep. Ben Baker, R-Neosho, said he plans to add provisions onto Senate Bill 27 on Thursday in the House Committee on Downsizing State Government, which he chairs.

The language stems from House Bill 1358, sponsored by Baker, which would exempt premises’ owners from criminal or civil liability in the case of exposure to a contagious disease, unless the owner “knowingly and purposely, and with malice” caused someone to be exposed to a clinical disease.

The bill itself is awaiting debate on the House floor, and Baker also added it as an amendment to an unrelated House bill Wednesday that was expanded in scope to focus on restrictions on government authority. The amendment garnered bipartisan support.

“I filed this bill on the last day of filing because I was just frustrated with the other bills. I felt like they were too ambiguous,” Baker said. “There were too many possible problems and unintended consequences. I wanted something very simple, cut and dry, to say businesses need to be protected.”

Senate Bill 51, a much broader bill addressing COVID liability protections that set a high standard for lawsuits alleging medical malpractice, product liability, and premises exposure in addition to explicit exemptions for religious organizations, was voted down in the House Rules-Legislative Oversight Committee Monday.

“The more people that looked at this and saw the potential problems, the less support Senate Bill 51 began to have,” Baker said.

Rep. Chuck Basye, a Republican from Rocheport who was one of the seven committee members to vote against the bill, said he did so in part because of his frustrations with the Senate.

“I’m a little angry at the Missouri Senate for not moving some bills that I’d like to see that is very, very important to not just the House, but Missouri and the country,” Basye said. “And I think that they should quit the nonsense they’re doing and start moving some House bills.”

Basye said he would like to see bills on Second Amendment rights and school choice taken up. House bills that would prohibit enforcement of federal gun laws and establish scholarship accounts that could be used toward costs like private school tuition are currently waiting to be heard in the Senate Committee on Governmental Accountability and Fiscal Oversight.

Basye said he still thinks COVID liability will make progress, noting it’s a priority not just for both chambers but also Gov. Mike Parson. But the Senate’s version is not the only option, he said.

“We’re not just going to take a bill and pass it because the Senate wants it passed,” Basye said, later adding: “I’ve been here seven years now. They’ll send over a bill, and we’re not allowed to amend it. And they just say, ‘Here’s the bill, take it or leave it.’ And then they just destroy our bills over there and put a bunch of crap on them. And then we don’t have time to address that. And so I think that’s a very unfortunate part of our system. But that’s what we’re dealing with.”

“Until you’re in the Senate, I think it’s really, really hard to understand how the Senate works,” Rowden said, later adding: “It is what it is. It’s part of the process. They can always reconsider that vote for a couple days if they think that’s what’s in the best interest.”

Baker said he thinks his COVID liability legislation has a path in the Senate. Lawmakers who voted against SB 51 in committee on Monday, like Reps. Wes Rogers, Raychel Proudie, and Justin Hill, were among those who stood on the House floor Wednesday and urged for the chamber to adopt Baker’s amendment.

“It doesn’t open up this protection of negligent nursing homes,” Rogers said. “It just sticks to what’s important, which is making sure small businesses know that they’re going to be able to open back up when this is over.”

Rowden said he had not seen Baker’s bill, but that passing some form of protection for businesses would still be a success.

“I think anything we can do just to solidify the foundation for small businesses is good, even if it’s getting half a win as opposed to the whole. I’m not opposed to that.”

On one of Basye’s biggest complaints, that the Senate has dithered on school choice legislation, Rowden said it’s been one of his top priorities.

With the budget now passed, Rowden said he hopes the Senate can refocus on things like Senate Bill 55, a sweeping education bill with historically controversial school choice measures. The bill is in “a great position,” Rowden said, despite bipartisan opposition that has required ongoing discussions to try and reach a compromise.

“The Senate’s a unique place, and nothing’s dead till the last day,” Rowden said, later adding: “I can only control what I can control. We always get to this point and then more times than not stuff dislodges. If it does, great, if it doesn’t we’ve always got next year.”