After staying away from Tasso’s too long, a critic finds his way baklava 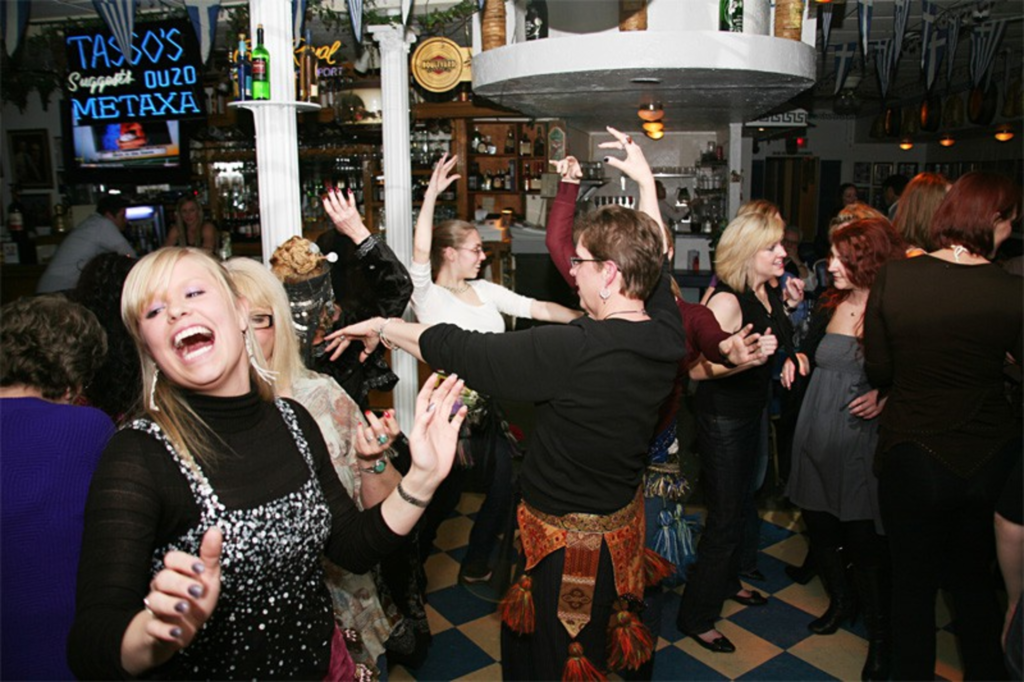 It’s blasphemy to admit this, but when I recently dined at Tasso’s Greek Restaurant, I missed out on all the things that this restaurant’s devoted fans love most. I didn’t stick around for the belly dancer. I opted not to break any plates. (The $3-per-plate fee seemed extravagant to this former waiter, who broke plenty of plates in the past.) And I wasn’t remotely interested in swilling any ouzo. I was just there to eat.

Still, after returning to Tasso’s for the first time in more than a decade, I could have broken a plate over my own head for being such a snob about the place. To put all my cards on the table: I once worked for another Greek restaurant — very different from Tasso’s but definitely a competitor. I’d been in Tasso’s when it was on 75h Street, but in 1992, Tasso Kalliris moved his namesake restaurant to 84th Street and Wornall, into a dumpy building where I once worked at a short-lived Italian restaurant. I had avoided the place ever since. So when a recent caller to The Walt Bodine Show asked the food critics where to get good Greek food in Kansas City, I had to hold my tongue. How could I recommend Tasso’s when I hadn’t eaten there since the first George Bush was in the White House?

The charismatic Kalliris gave his once-dowdy restaurant an impressive exterior face-lift last year, but the inside is a serious visual overload. There’s hardly an inch of wall space that isn’t adorned with a painting or mural, a neon sign, or framed photos of the extended Kalliris family or of fans or customers who are unknown or famous (John Travolta, various newscasters and, of course, a tan and toothy George Brett). Even the ceiling is decked out with strings of holiday lights, Greek flags and a mirrored disco ball. It’s not a dining room; it’s a scene.

I returned to Tasso’s, like a prodigal son, one busy Friday night. As I said, the belly dancer hadn’t shown up yet, but the singer-musician — our server couldn’t remember his name — was warbling hits from an Oldies 95-like playlist: Fleetwood Mac’s “Dreams,” James Taylor’s “Fire and Rain” and several Neil Diamond standards.

“Have an ouzo,” whispered the waitress. “The music will sound a lot better.”

This wasn’t a reflection on the entertainer, who was pretty good. Rather, it was a clever sales technique to push the house’s signature beverage: the potent anise-flavored liquor from Greece. My two friends, Truman and Bob, were tempted. “Why isn’t he playing the theme from Never on Sunday,” Truman griped. (He did, later.) Other diners in the action-packed room were downing ouzo, beer and various cocktails, and the place kept getting louder. At any other restaurant, this might have been annoying, but Kalliris has built his reputation on creating a party atmosphere. For years, I thought the raucous ambience trumped the food, but I was wrong: The food at Tasso’s is excellent. And all the cacophony can be highly entertaining if you’re in the right mood for it. “It’s Greek theater,” Truman announced. “It’s drama, comedy, insanity and music all thrown together.”

We started that meal with the fattest dolmathes in town and a plate of dips called A Tour of Greece: creamy hummus, intensely garlicky skordalia, a thick and luscious tzatziki, and a delicately seasoned roasted-eggplant salad called melitzane salata. We finished those appetizers, along with a light, flaky, spinach-filled spanakopita and ice-cold salads drenched in an excellent vinaigrette. I was full and ready to go home.

But no, the music and the vivacity in the dining room had the effect of an aperitif on Truman and Bob, and they pushed their plates away, ready for Act 2. The dinners took longer — a lot longer — to arrive than the first courses, providing more time to sit back, like the patrons at the adjoining tables, and sip more cocktails and listen to the singer wail “Play Me.” Truman leaned forward in his seat: “Isn’t Neil Diamond … Greek?” he asked.

No, I said, ready to applaud when the meals finally arrived: a hefty hunk of eggplant-and-ground-beef mousaka for me and baked lamb for Truman. “It’s succulent and tender,” he raved, “and the vegetables are incredible, cooked perfectly.” Bob ate beef kabobs and vegetables and seemed absorbed by the breathtaking visual images of Greece that were playing on the big TV to the right of the stage. “I wish I was in Greece right now,” he said.

“But you are,” Truman said. “It’s always Greece in Tasso’s.”

Clearly the atmosphere had gone to his head.

The dining room was busy but not nearly as noisy or raucous when I returned for lunch on a frigid Saturday afternoon with Heather and Franklin. It looked much different in daylight, too — much less magical. The waitress was harried (she was the only server in the room). Despite being a veteran server, she delivered our water glasses with her fingers on the rims. I was scandalized. She, meanwhile, was not amused when Franklin told her that she looked like the singer Patti Smith. I don’t think she knew who Smith was but seemed to understand that it wasn’t a compliment.

The lunch menu was great, though. It was hard to decide what to order, but Heather settled on the vegetable kabobs, with beautifully grilled mushrooms, peppers and onions. Franklin had the chicken kabob and loved it. I’m not a huge fan of the gyro sandwich, but people always rave to me about “gyro meat,” whatever that is, so I went ahead and ordered it. The gyro plate is a heap of that thinly sliced mystery meat (here it’s 80 percent beef and 20 percent lamb — sort of tasteless) served with pita bread, that silky tzatziki sauce, and a slice of the phyllo-and-cheese tiropita. I surprised myself and ate every bite.

I also ate nearly every bite of the chocolate layer cake, called Chocolatina here, as well as the wonderfully spiced baklava. Both are imported from Greek bakeries in Chicago.

“Good God,” Franklin complained, watching me greedily attack the baklava. “You act as if you hadn’t tasted Greek food in years.”

I’ll admit it: I had a lot of catching up to do.