After months of wavering, Schmitt comes out against McConnell days before Senate primary

Across town, Democrat Lucas Kunce rallied supporters — and dissed his main rival for the nomination. 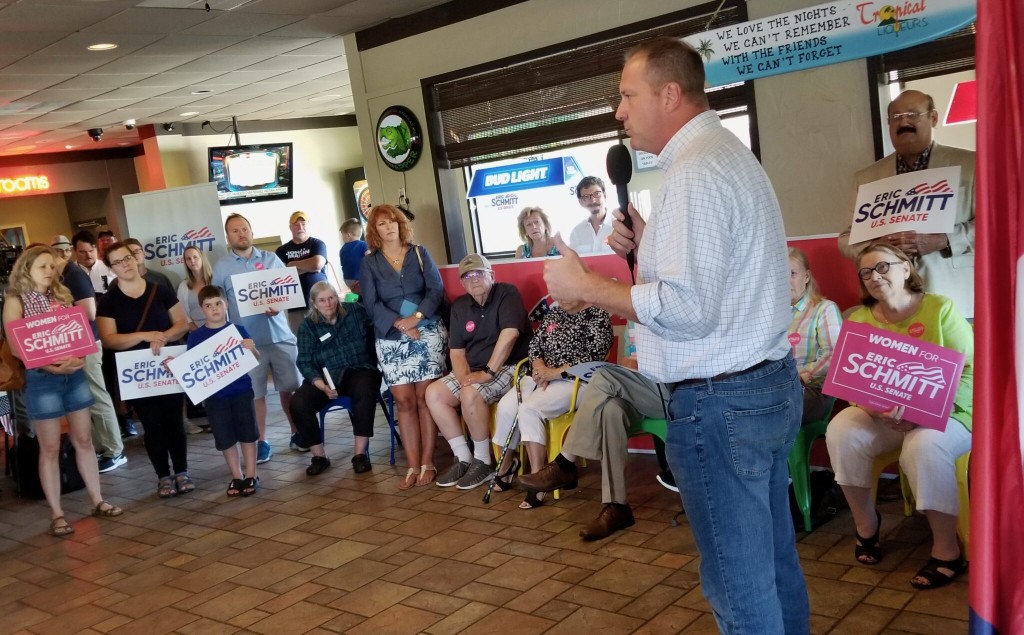 Attorney General Eric Schmitt speaks to a gathering of about 65 people Wednesday at a Columbia bar during a stop for his U.S Senate campaign. // Rudi Keller/Missouri Independent

The final push to next week’s primary has Attorney General Eric Schmitt joining, for the first time, those hoping to oust Mitch McConnell as Senate Republican Leader and Lucas Kunce dismissing the importance of St. Louis Mayor Tishaura Jones’ endorsement in the Democratic race.

Speaking to reporters after a campaign stop in a Columbia bar, Schmitt said Wednesday that McConnell has lost touch with Republican voters. Schmitt said he would prefer Sen. Ted Cruz of Texas or Sen. Mike Lee of Utah, who have both endorsed him.

“Mitch McConnell hasn’t endorsed me and I don’t endorse him for leadership,” Schmitt said.

Getting rid of McConnell was one of the earliest positions taken by one of Schmitt’s leading rivals for the GOP nomination, former Gov. Eric Greitens, when he entered the race. The third candidate atop the polls, U.S. Rep. Vicky Hartzler, on Thursday added her name to the list of candidates who will not back McConnell.

“We need a true conservative leader who will stand up to Joe Biden and turn things around,” Hartzler said in a prepared statement. “We need someone with backbone to fight against this train wreck.”

McConnell and former President Donald Trump have long-running antipathy that can be traced almost to the beginning of his presidency in 2017. This week, Trump taunted McConnell over polling showing him to be the least popular Senator and called him “disloyal” after video of McConnell blaming Trump for the Jan. 6 riot was shown in investigative hearings.

Removing McConnell has become a litmus test for Trump supporters.

During an interview on the pro-Trump OAN TV network, the former president was urged by ​​interviewer Chanel Rion to throw his weight behind Greitens because he was the only candidate in the primary to openly condemn McConnell.

Schmitt, Hartzler and Greitens have led polls in the Republican Senate race all year. Prior to this week, both Schmitt and Hartzler had avoided a direct answer about McConnell.

And Trump’s endorsement remains the biggest unknown of the race. It could go to Schmitt or Greitens, or even U.S. Rep. Billy Long, who has consistently polled fourth in the 21-candidate field. But it won’t go to Hartzler, who Trump condemned as not having “what it takes.”

Schmitt is pushing hard to get the endorsement.

“I know the president is considering an endorsement,” Schmitt said. “I’d love to have it. I think if he looks at the record, again, a proven fighter that’s fought these important vice versus somebody that quit. And I’m pretty sure he’s well aware of the separation in the polls this last week.”

To the audience of about 65, Schmitt touted recent polls showing him establishing a lead in the race for the first time. He attacked Hartzler as weak, saying she is “not up to the task of taking on the left” and called Greitens a violent abuser and a “quitter,” referring to his resignation as governor in 2018.

“He was elected to be governor, and he decided to take a knee and quit on the people of state so there’s a lot of questions that he hasn’t answered,” Schmitt said to reporters.

Hartzler’s campaign responded by calling Schmitt ineffective as attorney general and too cozy with China.

“It’s weak for Eric Schmitt to dodge debates and interviews while continuing to spin a web of deceit to distract voters from his horrible record of selling out Missouri to the highest bidders in the Chinese Communist Party,” read a statement from the campaign, referring to Schmitt’s failed effort as a state senator to enact tax credits for air freight shipments from China.

“That is what true weakness looks like, just like his failed and frivolous lawsuits that keep getting tossed out,” the statement concluded.

Greitens’ campaign did not  responded to messages seeking comment.

In 2018, Schmitt was state treasurer and did not join widespread calls from other Republicans for Greitens to resign in the face of an impeachment inquiry into charges he sexually assaulted a woman in 2015 and abused campaign finance laws with secret contributors.

After the impeachment evidence was made public, Hartzler said Greitens’ “behavior surpasses disturbing. It is disgusting.”

After Greitens resigned, Schmitt’s office issued a news release stating that, “Now is the time for the people of Missouri to come together and work toward a better future for our state.”

Schmitt’s stump speech was a familiar recitation of how he has used the attorney general’s office to challenge local COVID-19 restrictions, investigate the curriculum in public schools in search of critical race theory teaching and challenge almost every move of President Joe Biden’s administration, including on immigration, environmental and gun policies.

Erich Albert, a Columbia resident, said Schmitt’s his candidate because of his aggressive style.

“I’m backing Schmitt because he has a good set of canines to latch onto Democrats’ asses,” he said.

With her statement, Jones started two fights – one with Kunce himself, and the other with LGBTQ-rights supporters upset over Valentine’s recent statements on transgender issues.

Kunce, running on an anti-corporation, populist platform, brought his campaign to Columbia with a rally at a city park amphitheater.

“They are sort of institutional people from the St. Louis area and, you know, it doesn’t surprise me,” he said.

Jones campaign manager, Rosetta Okohson, however, told The Independent that Jones spoke often with both candidates.

“Mayor Jones has had regular conversations with both Trudy Busch Valentine and Lucas Kunce,” she said. “After hearing how both candidates would work on behalf of St. Louis and the people of Missouri, the mayor felt Trudy was the best person for the job.”

Jones, in a tweet defending her choice, said she wanted something new in a Democratic candidate.

“I think we have to stop electing the same old people to office in Missouri,” Jones tweeted. “We’ve done the attorney, male-dominated thing for so long and have seen little change.”

Jones was responding to criticism of her choice from the LGBTQ community.

“Don’t tell me you support my community and then spit in our faces,” Alderman Bill Stephens, who is gay, wrote in a tweet in response to the endorsement.

Valentine has given answers about LGBTQ issues in forums and to reporters that have angered people in that community and their allies. In one instance, she said treatments to transition genders should not begin until adulthood.

“I only would say, wait until 18, when a person is an adult, to do everything that wouldn’t allow going back to being maybe the sex that you were,” Valentine said.

The issue has been aggravated by an ad from Valentine highlighting positions against same-sex marriage and marijuana legalization taken by Kunce during a 2006 campaign for the Missouri House. Kunce sent Valentine a cease and desist letter, and her attorney responded that Kunce had defamed Valentine.

To the audience in Columbia, Kunce, who has touted the diversity of his campaign team as one-third LGBTQ, said the attacks are lies.

“They are saying I am against gay rights,” he said. “I have the queerest team in the country up here.”

As she sought to defend her choice, Jones siad she disagreed with Valentine’s statements on transgender children and would have “hard conversations” to help her “become a better ally.”

Kunce trailed Valentine but was just outside the margin of error in the only representative poll of the 11-candidate Democratic field. Valentine, a member of the wealthy Busch family that owned Anheuser-Busch, has put $4 million of her own money into the campaign. Kunce has raised more than $4 million, much of it in small donations.

“The last day of filing they put in a billionaire heiress from that class so they could preserve power for themselves,” Kunce said.

Little has been said by candidates from either party on national security issues facing the country. Kunce, a former Marine, said he questions some of the U.S. commitments around the world.

That includes the need to have the Fifth Fleet patrol world oil tanker routes, Kunce said, noting that much of the oil from Saudi Arabia goes to China and other countries.

“Let’s let China defend their own supply chain,” he said.

He also argued that economic dependence on semiconductor imports would force the U.S. to defend Taiwan from any Chinese military threat. And he said he only reluctantly supports military aid to Ukraine in its war against Russia.

He backs sanctions that would block Russia from world oil markets.

“I’m okay with arming Ukraine, but I’m not okay with us not taking the extra steps to actually end it because otherwise, I’m telling you, that war’s gonna grind out forever and we’re just gonna keep sending over more and more military aid,” he said. “And that’s not a solution.”