‘That garbage needs to stay at home, not on the airwaves,’ says one Republican voter. 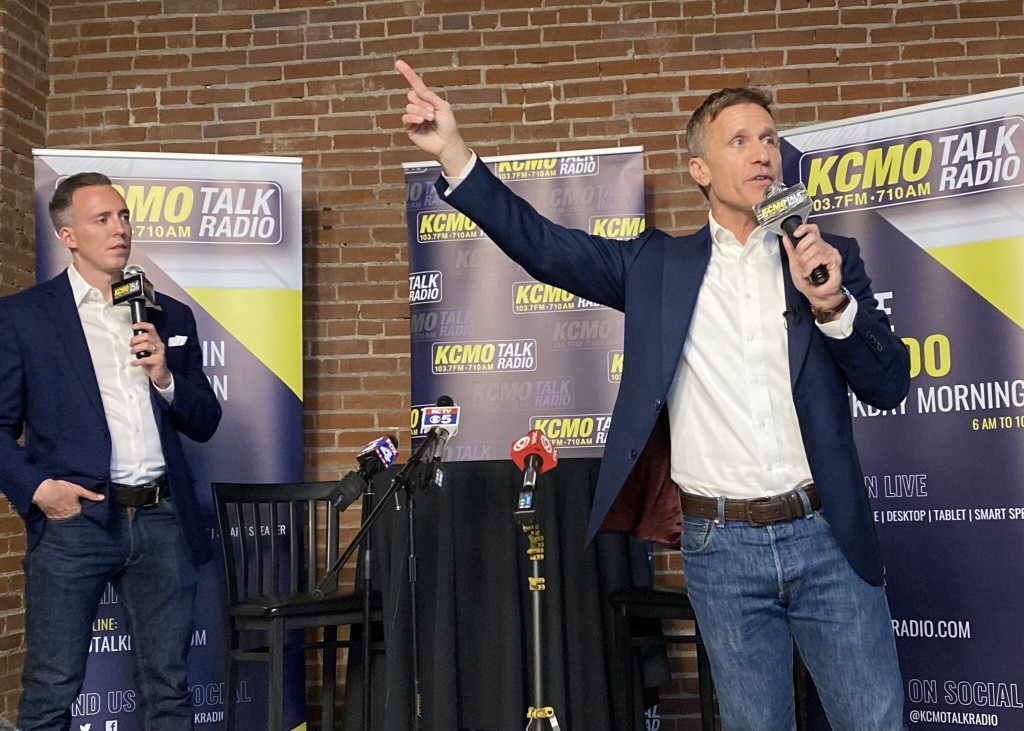 Former Gov. Eric Greitens campaigns for U.S. Senate in downtown Kansas City on July 25, 2022. Greitens sat last week for a deposition following accusations by his ex-wife that he abused her and their children, but the scandal was hardly mentioned at the event. // Photo by Allison Kite of Missouri Independent

When she arrived Monday night to hear former Gov. Eric Greitens campaign for U.S. Senate in downtown Kansas City, Christine Thompson was on the fence.

“That garbage needs to stay at home, not on the airwaves,” said Thompson, of Independence, about the news of Sheena Chestnut Greitens’ accusations.

Instead, Thompson was concerned Greitens might “turn RINO,” or Republican in name only, and resign from office like he did in 2018 if things got bad. She wanted to see him in person to see if she thought he would “run away” again.

“That is a personal matter,” she said of the accusations of abuse, “that he should not be drug through the mud.”

Douglas Roach of Lee’s Summit said he was concerned about the accusations. But he said they were unproven and he wasn’t going to let them affect his decision to support Greitens in the Aug. 2 GOP primary.

“What I find interesting is no one’s attacking his policy, just his character,” Roach said, “and when people attack your character and not your policy, then I kind of question their motivations.”

The only mention of them to the crowd came when Mundo asked vaguely about voters’ concern about unspecified “accusations” against Greitens.

“What do you want to tell every conservative grassroots folks in the state about these things that they’re seeing on TV, hearing on radio that people are spending millions of dollars against you on?” Mundo asked.

And much like he said on a wide array of issues throughout the evening, Greitens blamed the forces that oppose him. He said the accusations were “concocted” in Washington, D.C.

“It shows how desperate they are,” Greitens said of his political enemies, “but I have always put my faith in the people of Missouri. I continue to do that. And it’s why I’m so convinced we’re going to win this in seven days.”

Despite having to leave office in 2018 to avoid impeachment and settle a felony charge, Greitens is considered a front-runner in the Republican primary for the seat currently held by Sen. Roy Blunt, a Republican, who is retiring.

“As long as he doesn’t run away again, I think that Greitens would be the strong candidate,” Thompson said.

His bombastic style and promises to fight McConnell and the Republican establishment drew cheers from the audience of at least 150 at an event venue in downtown Kansas City.

That’s what voters interviewed Monday evening said they liked about him — his strength and willingness to defy the establishment of the Republican party.

“Are you guys ready to take the country back?” Greitens asked the crowd as he took the stage.

The country, he said, is currently facing a crisis worse than 9/11.It’s in crisis not only because of “the left,” Greitens argued, but because RINOs have stabbed voters in the back.

Greitens said he decided to return to politics to fight for the country. He said he feels blessed by all he’s been through — and even his enemies.

“I believe that I’ve been able now to see the true nature of the enemy that we’re facing,” he said.

What Greitens promised voters was an unabashed “America First” policy and complete rejection of Republican establishment and bipartisan legislation.

He said he’s sickened by RINOs willing to send American troops to Ukraine.

“Anybody who wants to go and die for the Ukrainian border, grab a rifle and go,” Greitens said.

A man yelled from the crowd: “You just got my vote.”

Throughout the evening, Greitens dished out policy proposals straight from the playbook of former President Donald Trump, whose endorsement he hopes to secure. He said he talked to Trump recently but declined to characterize the conversation.

“Who would have believed that one day, we would live in an America where gas prices are higher than Hunter Biden?” Greitens said.

Greitens blamed the high gas prices on Biden and decried his decision to kill the Keystone XL pipeline. He didn’t offer any strategies to reduce gas prices, which have been falling for the last few weeks.

He said the U.S. border with Mexico is in crisis and pledged to double down on Trump’s efforts to have a wall built. He said with Biden in office, a border wall won’t be a priority but senators can stonewall other necessary policies, like the federal budget.

“What I said and I believe other America First candidates around the country are going to say is that, ‘You want a budget? We want a border wall. No border wall, no budget,’” he said.

Greitens said he supported Missouri’s Second Amendment Preservation Act — even though he initially criticized it as an effort by RINOs to “defund the police” and received pushback from gun-rights groups. He said the founding fathers included the right to bear arms in the Constitution not to protect them from foreign adversaries but in the event their own government became tyrannical.

He indicated Americans’ Second Amendment rights would protect them from the sorts of lockdowns Australia pursued to limit the spread of COVID.

“The purpose of the Second Amendment is so that the people can protect their liberties,” Greitens said, “and if you wanted any more clear example of what’s happened — you guys see what happened in Australia during COVID? Absolute, absolute tyranny.”

Asked how Missouri could attract jobs through means other than lucrative tax credits for corporations, he said people want to live somewhere without violence and with good schools and infrastructure — but not the kind in the $1.2 trillion bipartisan infrastructure bill, which he incorrectly called a “Green New Deal.”

As he wrapped up his remarks, Greitens said he wanted to offer voters a word of hope.

“I want to tell you that my heart is so full,” he said, “because everywhere we go around the state of Missouri, patriots are standing up.”