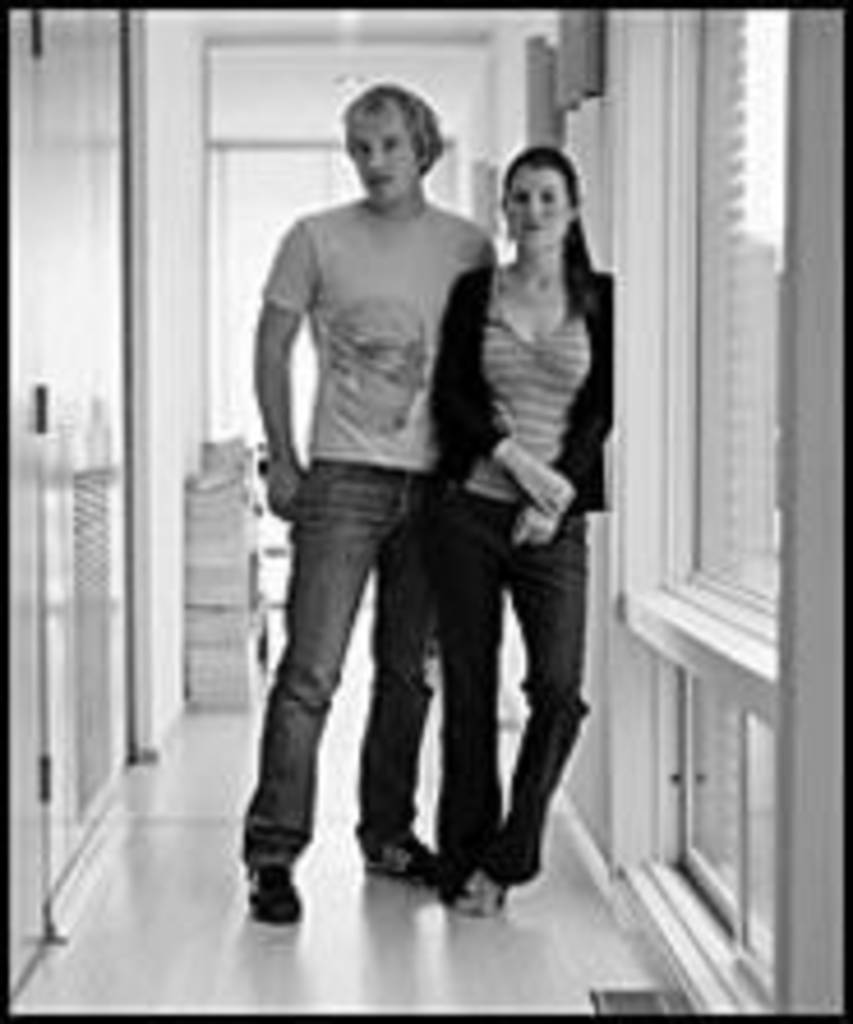 Some birds have all the luck.

Those would be the ones that perch near the deck of Hesse McGraw and Cobi Newton’s house just north of 39th Street in Kansas City, Kansas. While other winged ones are off digging for worms or tirelessly pecking at tree trunks, these birds eat like kings from a designer bird feeder, courtesy of — I shit you not — Postmodernpets.com, a Web site “for design savvy pets and their people.”

Although Postmodernpets’ Philip Plein dog bed (it looks just like a piece of human furniture by Miles van der Rohe, only smaller) is a bit out of the couple’s price range for now, the bird feeder seemed the least they could provide in exchange for some morning chirping. If we are to believe the Web site’s claims, sparrows and finches and other petite birds have an affinity for sleek ceramic design. They just like it. And it’s hard to blame them. The orblike shape is very here, very now. Wood and cork are totally played out. Birds have been eating out of those old things for, like, ever.

Paragraph gallery owner and installation artist McGraw and Spool co-owner and clothing designer Newton take a particular interest in inspired living spaces, be they for humans, birds or arachnids. The deck of their new prefab, modular home also hosts a particularly creative web architect. Most people would sweep the spider’s webs away the first chance they got and either smash the spider or carry it off to the woods in a cup, depending on their views regarding the relationship between spiders and luck. Not these two.

“What is this whole network meant to do?” asks McGraw, clearly not expecting the pingpong-ball-sized spider to answer. He points to an elaborate construction that moves downward in a 3-D formation, creating something that’s part spiral staircase, part Charlotte’s Web. You almost expect this spider to start spelling out prophecies.

Which, in a human context, is how he found out about Studio 804, a program for third-year students at the University of Kansas’ graduate school of architecture. Unlike most architecture programs, which involve more pencils and books than hard hats and drywall, the students in Studio 804 actually build what they design, one collaborative project a year. It’s one of only a handful of design-and-build programs in the country. In previous years, students built affordable and innovative homes for Lawrence residents. Graduates of the class of 2004, however, built a modular house in a garage, one unit at a time, then moved it to Kansas City, Kansas.

McGraw and Newton came by the site and walked around the foundation one day. The next day, their house stood finished.

“I feel like there’s this proliferation of half-assed contemporary architecture in town,” McGraw says. “It’s brilliant that twenty students from KU showed up with no budget and did something more interesting than a lot of the work by practiced firms.”

It took only 4 months to design and build the whole thing, with students putting in days that started at 8 a.m. and lasted until 9 or 10 p.m. That’s not counting the drive from Lawrence and back. One day, McGraw even bought them a keg — something few home buyers would really want to do for the construction workers building their houses. But the KU architects were so focused that they never got the chance to drink the beer.

In a city where lofts come with carpet, McGraw may be on to something. New condos in Westport look like institutional bathrooms turned inside out to show off the tile work. Shopping mall meets dormitory.

The Plaza is an imitation of another city, like Epcot Center.

We’re getting an arena downtown, but people who live in the neighborhood still can’t walk home at night because there’s a lack of streetlights. Beautiful old buildings are getting yellow stucco extensions — the architectural equivalent of stripper hair.

On the other hand, this unabashedly suburban home is sleek and inventive. And as long as we’re stretching the concept of what is urban, McGraw and Newton are thinking of euphemistically calling their house a loft and their part of town an “urban, family neighborhood.” Turning onto their cul de sac, all you see is a square wall of elegantly framed translucent window sitting on a lush, green plot of land. In the right light, it almost looks like a small movie screen.

The sides of the house look as if they’re made of textured, superdark wood. The material is called massaranduba, and over time, it would turn gray were it not for the sealant used to protect it against ultraviolet rays. Inside, you can still see the metal handles through which cables were looped to load the five units onto the moving truck that brought the house here from Lawrence. If you pay close attention, you can discern the seams where the five units were connected. Otherwise, you’d never know that this thing came in pieces or that it was built someplace else.

Because they were separated from the site, the students were forced to pay particular attention to their work so that no surprises would await them on installation day. The land, once considered unbuildable because of its steepness, had been covered with junk. It was essentially a dumping ground, a landfill minus the fill. But once all the trash was cleared away and a concrete foundation poured to give the architects a level work surface, it turned out to be a beautiful location for a home. The dense, tree-filled hill on the property gave the students an exciting feature to emphasize. The result? First thing you see when you walk through the door is the sliding glass window overlooking nothing but treetops. It looks like goddamn California.

McGraw and Newton do, in fact, have a basement. It was built into the foundation and has its own separate entrance. The place is not only tornado-equipped but also can stand up to storms and the nefarious flood monster. The place is waterproof. Industrial roof and everything.

There’s a growing movement for this prefab, modular architecture. Translate the phrase modular home into French — that’s maison modulaire — and plug it into a Google search. You’ll turn up images similar to those you’ll find if you do the same thing in English. In other words, this is an international phenomenon, with each home accounting for its environment in different ways. Snowboarding Dutch architect Meindert Versteeg, for example, created a “cliff house” — a transparent, assembly-required shell that can be affixed to the side of a mountain. The floor is made from the storage crates used to ship the components. Perfect for an adventure seeker who wants to live anywhere with good slopes.

Could Newton and McGraw move their house somewhere else? Sure. But for now, they’re enjoying their urban, family neighborhood. And when they’re priced out of it, as artists already are being priced out of downtown, they won’t have to sell to escape gentrification.

Yet another advantage to modular housing, the brave new trailer home of the avant-garde.