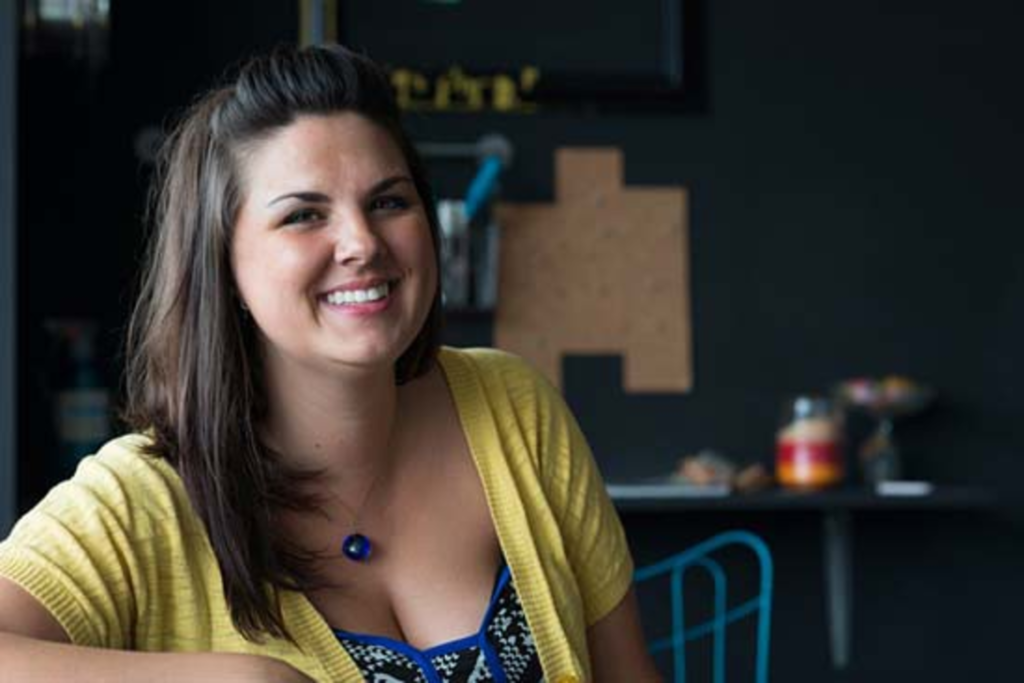 Abbie Marshall’s bright, bold style pops inside Reused Furniture – a store that, beyond Marshall’s front corner, sells a sea of consignment goods. The business sits between a now-defunct Waid’s restaurant and A.B.I.A. (A Bargain Insurance Agency), an antidote to the dreariness of this Olathe shopping strip.

Given the demand for upcycled furniture around here lately, you’d think Marshall would be doing all she could to move her quirky business, Ecolectic, to a much hipper location. But no, she loves it here. You see, Marshall, 27, thrives on being different.

“Instead of doing what everyone else was doing, I wanted to come out to where repurposing isn’t big and spark an interest in it here,” she tells me as she eyes one of her favorite pieces: a chair she turned from pastel to emerald – green and reupholstered with a burlap coffee sack.

That desire to stray from the pack prompted her to avoid the resale-shop epicenter of the West Bottoms when she moved to the Kansas City area from Chicago more than a year ago. She spent part of her childhood in Overland Park, and after she earned her bachelor’s degree in interior design at Chicago’s Harrington College of Design, the comforts of home were calling.

Things fell into place last summer. Her mother had sold refinished furniture in both a West Bottoms shop and the space Marshall now occupies in Reused, and she was looking to leave both ventures. With Marshall ready to start her own boutique while working as an interior designer, the timing was right. In July 2012, she opened Ecolectic in her mom’s prior space, which sits at West Santa Fe and Kansas Highway 7. The move to Kansas City has also gone well for her husband, Kip Marshall, who joined local pop-folk band Tides for Aviation.

Abbie Marshall says she wants to help her customers “live life in color,” as the saying goes. In practice, this means that she finds used furniture from such places as Craigslist and renders her pieces with loud colors, vivid designs and high contrast.

She pays attention to trends while adding her own touch to what’s popular. For instance, she sanded down an old church pew, painted a red and cheery “Hello!” in cursive on the seat, then added some red military chevron – an edgier version of the zigzag pattern that’s all the rage – on the backrest.

Her items and the well-selected antiques that Reused owner Zip Iams sells complement each other. Occasionally, one of Iams’ customers ventures to Marshall’s corner to see if she can spice up a consignment piece.

Based on Ecolectic’s steady growth in the past year, Marshall’s style seems to be catching on.

“People will say, ‘Wow, I never would have thought of that. This is like Pinterest,’ ” she says. “I like that reaction because it means I’m making people want to try something new.”

She’s mulling whether to commit to an idea to honor her favorite designer, Jimmie Martin of London, by creating pieces that look like they’ve been tagged with graffiti.

“Would the suburbs be ready for that?” she wonders. “I am all about pushing the limits and empowering others to do the same, so I might have to just do it and see how it goes over.”