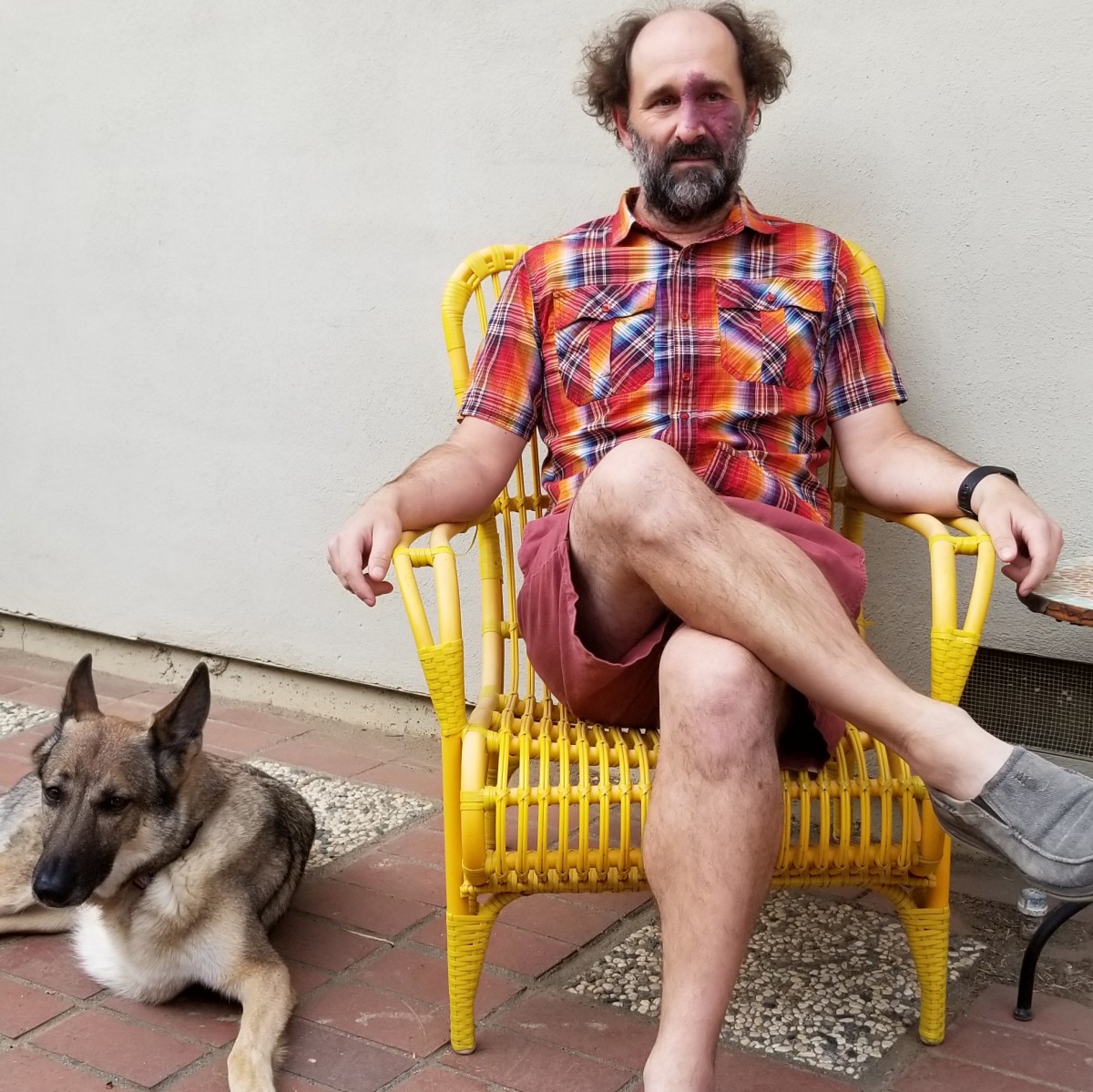 Author Aaron Carnes’ new book, In Defense of Ska, is simultaneously a history of the genre, as well as a memoir of the writer’s time in the genre as both a fan and a musician. As the drummer for the band Flat Planet, Carnes toured the United States, playing all over in the mid-’90s. This was before ska had its brief revival during the latter part of the decade with bands such as Reel Big Fish, the Mighty Mighty Bosstones, Save Ferris, Less Than Jake, et al, meaning that Flat Planet ended up playing sets in small venues to unsuspecting concert-goers who had no idea what to expect from this motley crew with a horn section.

Given that ska of the ’90s is experiencing a semi-resurgence, bolstered not only by overall nostalgia for the decade, but also the well-received Pick It Up documentary, it seems that Jamaican-influenced, punk-fueled era is what immediately comes to most folks’ minds when the word ska is bandied about, but when you read In Defense of Ska, that’s one of the first things Carnes goes about debunking, as well as one of the first things we discussed when I hopped on Skype to discuss all things ska with the author back in April.

The Pitch: The ska resurgence: is it now or has it always been fueled by a sort of nostalgia?

Aaron Carnes: I think that there is an established vein going on, but I think the nostalgia brand of resurgence that you’re seeing going on is masking a little bit of the actual resurgence of new bands and new interests. There’s real legitimate interest in new bands by mostly younger people that’s happening right now and it’s been an ongoing thing the last 20 years, but it seems particularly strong right now. I think that’s unrelated to what’s happening with people who grew up in the ’90s who are suddenly far enough away from the ’90s that they’re having a little burst of nostalgia.

They just happen to be happening at the same time so I think people are kind of like, “Whoa, Less Than Jake has a new album,” but at the same time, it’s like, “That’s cool and everything, but Bad Operation and Catbite and all these other bands are brand new and they’re doing great stuff and they’re having real audiences and they’re at the front of their career.” People are interested in them. And I think that’s a little bit more interesting personally than people like having a bit of nostalgia about the ’90, ’cause that’s temporary. That’ll go away.

It is really interesting because the Bosstones have a new album coming out and it’s on Hellcat, which is arguably the most major label they’ve been on in almost 20 years. I once read something that basically said that the ska bands of the ’90s will end up being like the .38 Specials and REO Speedwagons of the late ’80s/early ’90s generation and, strangely, it has come true.

Yeah, but I think that also ties into a certain thing, which is that these acts–for whatever nostalgia is happening–they are still playing like the same size theaters and venues that they were in their heyday. That was happening the entire last 20 years. If you go back to 2006, nobody cared about ska. Reel Big Fish were headlining the same size venues. From Reel Big Fish’s point of view, aside from being on the radio or not on the radio, it’s been static in terms of their fan base size.

That is sort of the fascinating thing: the Bosstones and Less Than Jake and Reel Big Fish–that triumvirate of the bands that had their moment in the sun–they’re still playing solidly packed shows. They’re not having to black out parts of the building or something like that. I just can’t really think of other bands from the ’90s that had two or three hits that can do that.

That’s true. It’s like, yeah, maybe like now–20 years later–bands can re-emerge as with a couple of hits from the ’90s and play a circuit for a little while, but the consistency that the ska bands had from the ’90s where Reel Big Fish and Less Than Jake–and Reel Big Fish in particular–were playing 200-250 shows a year, every year up until the pandemic and doing fine. That’s not like a trend. That’s a little different.

There’s this article that came out in 2014, also called “In Defense of Ska,” by Reid Attaway and he talks about the idea that what makes ska so hard to describe is all of these different bands fall under the header of ska. Was that a difficult aspect for you to write about, where you’re trying to put Skankin’ Pickle next to Hepcat next to the Blue Meanies? I suppose if you’re in the subculture, it’s one of those “If you know, you know” sort of things but trying to explain it to a “normie”: do you have a trick for explaining what ska is or why it’s so all over the place?

I never really thought much about explaining what is or isn’t ska until more recently where it kinda gets discussed and debated online. Before that, it never really seemed like an issue but at the same time, people are starting to say something is ska that isn’t. I have a very wide lens of what I allow to be ska, but I think that it has to be influenced by ska. Some people start thinking stuff like, “Oh, it’s got horns.” Well, that’s not ska. Rocket from the Crypt is not a ska band. Blue Meanies are barely a ska band, but they have influence from ska. Ska was a part of it. It’s like a clear ingredient so, because of that, I’m comfortable putting them in the category even though, really, a lot of what they do is kind of like Mr. Bungle, math rock-y kind of stuff.

I mean, Hepcat has a much more clear version of ska in terms of what we think of as ska, but you know, these other bands? If ska’s an ingredient or a component and they’ve evolved from it, I feel comfortable calling that ska, but somebody sees a band that’s upbeat and has horns, it’s not ska, just because it has a vague familiarity with ska. There has to be something in there. There has to be an avert influencer ingredient with the members themselves, is how I think of it personally.

But I mean–I don’t know. I don’t know how you explain that to somebody because what is it about Blue Meanies that’s ska? I mean, they barely have upbeats. It’s kind of hard to explain. At that point, you’re not just talking about vague genre descriptions–you’re almost getting into ethnomusicology at that point.

I think the reason I’m generally comfortable with this and I don’t split hairs too much is that I think something that’s good about ska is that it is flexible. It’s flexible to the point where you can have a band like Hepcat and you can have this newish band called The Best of the Worst that’s popular right now. It’s post-hardcore, breakbeats, and stuff. Ska can fit with whatever else it is pretty well, more than most genres can do that. And that’s fine. If you’re into post-hardcore and ska, you can put that together in a band. I mean, I don’t know if that’s true for others.

To that point, there have always been these bands that are not ska bands that have ska songs. That was a thing for a minute in the late ’90s where you have bands, like Wank or Schleprock or NOFX, that had ska-ish singles for a hot minute in 1997 or 1998. I remember seeing bands at that point where they were like, “Here’s a ska song.” It was an easy way to get people moving, which I think is a very valid reason. The reason why the music has endured in its various permutations over the years is the fact that it is, ultimately, dance music. 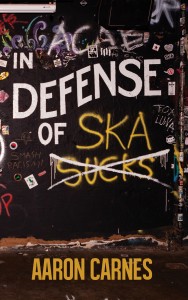 What are your thoughts are on the idea that it got and still gets kids who would not normally be seen dancing in public at all, ever, dancing with enthusiasm in front of a crowd of their peers?

I was definitely a kid who liked the energy of it and it spoke to me, but the energy of angry music didn’t speak to me ’cause I wasn’t angry, but I had that kid energy, so I didn’t want to go to metal shows or hardcore shows and mosh. Those guys at school were always kind of scary or weird or did a lot of drugs or whatever. I wasn’t any of those things, but when I start going to ska shows I never felt intimidated by the rest of the audience. They all seemed pretty safe.

You have a podcast, also entitled In Defense of Ska, and you talk to very interesting people, like Thou lead singer Bryan Funck, and he really leans into the cross-pollination aspects of everything. He talks about seeing these ska bands play on bills with other bands and just being like, “I was surprised,” and that seems to be the recurrent theme: people you would not expect to be into ska are into ska because “I saw a band that played a show and I saw it and it was good and I liked it and I enjoyed myself and I was surprised”. I appreciate the aspect of surprise years and years and years on.

Yeah, I think that goes to show you all the cultural context wrapped around ska. That’s why people are surprised: because they have this image of ska or this belief that it’s sucks, that it’s bad, or that it’s music for kids, or that it’s kind of amateurish, so they go see a band or they happen to catch a band and it’s good and they’re just surprised, because of everything encased in their idea–even a subconscious idea–of ska.

It shouldn’t be surprising that a band is good. Like, I wouldn’t be surprised if I saw a band in a genre I’m not into live and they were really good at it and appreciating it but, for some reason, ska is that for people. It’s like, “Oh, wow: look at these guys. They’re so tight. They have good energy. It’s catchy. It sounds good.” In the club atmosphere, it’s like–you’ve got two guitarists in a four-piece horn section. You can’t exactly be going out there and half-assing it.

In Defense of Ska is out now from CLASH Books.