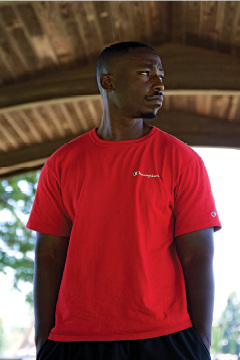 Two and a half years have passed since Kansas City, Kansas, rapper Aaron Alexander released Radiant Child, a mixtape full of bright and colorful hip-hop that sampled jazz and R&B records and heavily referenced neo-expressionist artist Jean-Michel Basquiat. Two and a half years is an eternity in Alexander’s trade, and though he hasn’t been idle — he has worked steadily at building his local following — fans of that release have endured a long wait for the follow-up.

Now it’s here: Memento Mori, Alexander’s most polished, melodic work yet, studded with contributions by rapper DEV3N, R&B singer Mae C and the KCK jazz ensemble Stranded in the City. It’s the kind of recording with a shot at snatching the national spotlight and showing everybody what one of Kansas City’s best hip-hop acts can do. On the eve of the album’s release, I talked with Alexander about why he took his time making it, and what he learned along the way.

The Pitch: How would you say that you’ve grown as an artist since Radiant Child?

As far as artistry, I’ve just gotten better at it. I just let myself get out of that “rap” box, ’cause I used to wanna be a rapper real bad. Everybody was going on that wave of, you know, melodies and things like that. And then I started liking melodies and things like that, so I’m just doing me. Radiant Child — that was more so trying to be a rapper, trying to be the best rapper, trying to have the best lyrics. Now I’m trying to make the best songs — and I think I’m doing a pretty good job at it.

Have your influences changed?

Nah, I don’t really think my influences have changed. I was influenced by Kanye [West] and Frank [Ocean] and people like that, but it’s not really their style of music that influences me. It’s the fact that they’re willing to go and do different things.

What made you want to incorporate so much live instrumentation on Memento Mori?

The jazz thing was always kind of my thing. I guess it was just, “Why not have live jazz on there? Why not mix synthetic with authentic? It’d be cool.” So that’s what we did, and it came out tight.

Your recent video for the song “Faces” was received well. Are you someone who thinks about visual elements when working on music?

This is really my first video. I want my songs to make people see things, so I write visually. I write to where people can feel a sensation, or feel something. I just kinda let the music manifest into the visuals. I often dream about the songs that I’m working on.

B-Will seems to be one of the producers you work with most.

It wouldn’t be no Aaron Alexander if not for B-Will. It’s like Drake and 40. You know, if there wasn’t 40 … I’m nice, but I wanna be next-level, and people have that person that, when both of them are together, magic happens. That’s me and B. He’s not just a producer. He mixes. He’s heavily involved in the mixing.

How did you first get to know him?

He might’ve came my freshman year of high school. I didn’t know him that well then, but I wanna say around my junior year we got cool, ’cause he used to come to the band room and play the piano and shit, and I used to just freestyle over it. Eventually he made beats, and I was like, “This shit cool,” but one summer he leveled up on his production and sent it to me and I was like, “Damn, this shit is way more than cool now. Let’s link up and do something.” And we did. It was a project and it turned into two, and I wouldn’t work with nobody else.

Why do you think you work so well together?

I feel like I’m good at telling stories, and he’s good at making worlds with his production. … He also has a very keen ear. It’s crazy. My ear ain’t that crazy, but I have a good eye. We help each other with our weaknesses, and that’s what makes it seem like we have no weaknesses.

I know that you’re a big fan of anime and that it’s had some influence over the project. Where can that be found on Memento Mori?

An anime I was watching kinda sparked the idea for the project. I guess you could say without the anime, there would be no project at all. I watched an anime [Death Parade] and I got to Episode 11. I watch ’em subbed, but it’s all in Japanese and cuz is talking and pouring this girl this drink and, “Something something something Memento Mori.” Stood out clear as day. I was like, “Oh, shit, that sounds tight as fuck.” So I did a lot of research on memento mori, figured out it was a concept or a phrase, started researching it a lot and found my own interpretation on it and worked on the project. I feel like the whole thing behind Memento Mori — the process of life and death and everything in between — is beautiful, and I just wanted to make beautiful music to reflect that process. That show kinda provided me with an aesthetic, ’cause I feel like the show captured that aesthetic very well.

Your music is more hip-hop than anything else, but it also contains a lot of R&B sensibilities. Where do you think those come from?

I have a love for R&B music. The voice can be used to emote a bunch of things, and I think singing is the best way to convey emotion vocally. It definitely stems from listening to other R&B artists’ music. You have D’Angelo. I’m a big neo-soul person, so you have Musiq Soulchild, other neo-soul acts like Lauryn Hill and all that.

Lots of rappers right now are trying to gain followings by flooding the internet with new music all the time. Why are you taking such a drawn-out approach with your music?

You only get one chance to make an impression. Say I put out a song and the song’s bullshit. I move on to the next thing. The next thing is the greatest thing in the world. Nobody’s gonna listen to it. They’ll be like, “We listened to that one song. It was trash.” I wanna make my music the best it can possibly be, so that takes time. I can’t just drop a bunch of songs and be like, “Maybe one of these will pop.” That’s just not the kind of artist I am.