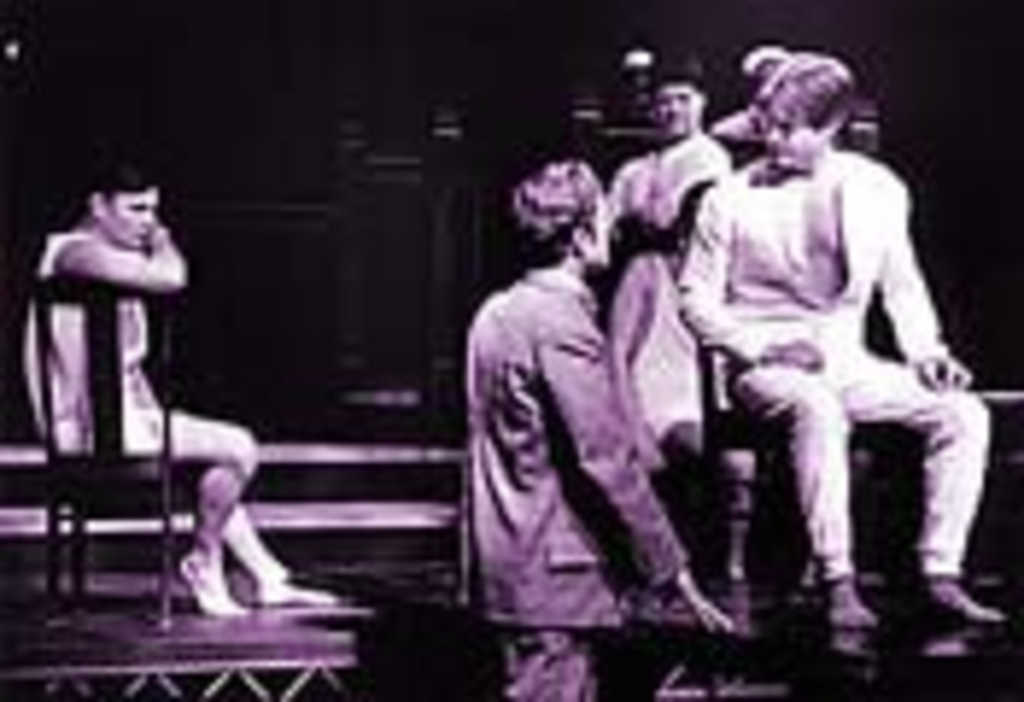 Every now and again a play will come around that truly captures the essence of the power of theater in our modern world, a play that brings to life the toils of society in its quest for uniformity, a play that presents its case in a stimulating and educational format. The Missouri Repertory Theatre’s production of Moises Kaufman’s Gross Indecency: The Three Trials of Oscar Wilde is such a play.

Gross Indecency is the story of the trials of Oscar Wilde on the issues of his homosexuality, and it is presented in a Greek chorus format that is inspiring and pleasing to watch. Even if an audience member is unfamiliar with Wilde, the play is mesmerizing. If one is versed in the playwright-poet’s life, the production is entrancing.

What makes the production shine so brightly is the method of the presentation mixed with a talented cast that is committed to the subject matter. The play’s first act is presented in an almost verbal ballet. The timing and characterization are so moving that the two-hour-and-30-minute running time flies by.

Director Paul Barnes did well in assembling such a strong cast, but he took the production to the next step by giving them the tools to succeed. His willingness to explore and often magnify the humor of the production worked well. Kaufman could not have asked for a better production of his work.

Kaufman gave the dialogue of a stuffy situation the look and feel of art. The treatment of Oscar Wilde was both disturbing and sympathetic, and actor Arthur Hanket handled the character deftly. Hanket plays all levels of Wilde in a fashion of which one could imagine Oscar Wilde himself would be proud. Wilde’s gentle manner, mixed with fear and commitment to his ethics, was strongly evident, and the entire production company appeared to treat the work with the deserved respect. All characters worked together as one heartbeat of art, leading to an obvious and artistic conclusion.

The play also shows a man born before his time. Wilde’s sense of the future and grasp of the meaning of life and art were clearly defined and represented. His keen sense of humor and mastery of the soundbite were decades ahead of themselves as well. The program holds some quotes from Wilde that sum him up in a nutshell, such as, “There is only one thing worse than being talked about, and that is not being talked about.”

This play is definitely worth talking about, and it inspires discussion all the way home from the theater, something a lot of shows of late have not achieved.

Adding to the artistic elements of the production was wonderful work by the team’s technical crew. Cliff Caruthers’ sound design was a character in its own right. At times in the last moments of the play, Caruthers’ work added a major element to the performance.

Working on such a large performance area, the set was so focused that the room seemed much smaller. Gary Wichansky’s set design gave a real pressure-cooker feel to the large space, and his use of focus areas was deft and logical.

The ensemble cast of Tom Story, Jeffrey Guyton, Michael Fitzpatrick, David Reed, Mark Silence, Tom Woodward, and Michael Shipley was so unified that in the first act I was forced to remind myself that there was very little movement. The blocking was so well developed that the play appeared to be spinning its way through the journey at all times.

This is a play for those who truly love the stage and for those who just love art. Gross Indecency is a collage of the human animal at its best and worst, but the play is plainly theater at its best.

at The Missouri Repertory Theatre