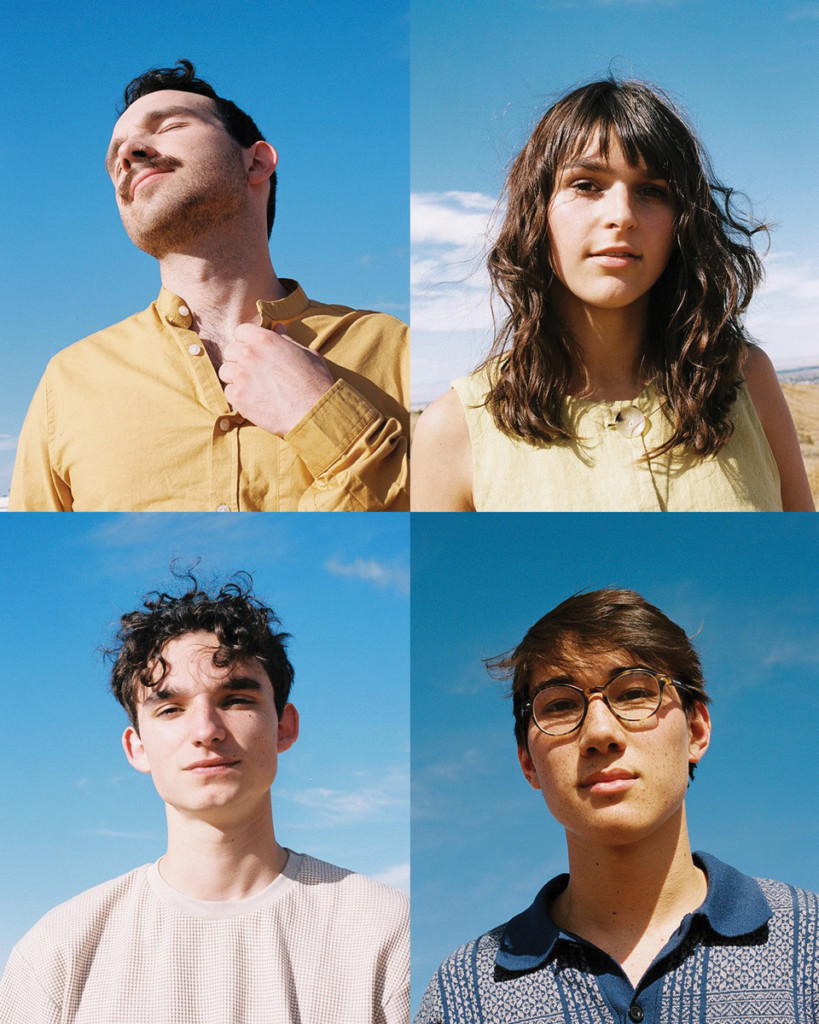 In 2014, Addie Sartino, Brandon Yangmi, Pierce Turcotte, and Austin Fraser were students at Blue Valley High School who had just started a promising indie-pop group called The Greeting Committee. Flash forward five years, and those young pups have grown from a local band into a national act that tours with heavy hitters like Rainbow Kitten Surprise, Bombay Bicycle Club, and, earlier this year, a monthlong stint opening for Hippo Campus. We spoke to Sartino by phone recently during a tour stop in Idaho about the Greeting Committee’s rise, its new EP, I’m Afraid I’m Not Angry, and the process of anchoring catchy, dancey tunes with such emotionally centered songwriting.

Just going through the song titles on the new EP—“Cry Baby” and “Simply Surviving” and “What If Tomorrow Never Comes?”—seems to suggest that recording the vocal takes might have been an emotionally draining experience. [laughs] Yeeeeaaah, I would say that it was. It also caught me at a time in life where—2019 has been a year of transition for me, and a lot of that caught up to me the week we were in the studio, so a lot of that week was filled with me being in tears. So that set it up nicely for those lyrics and those songs. It was somehow simultaneously horrible timing for my personal life, but also great, because it did, in some way, focus it on those vocal takes and the music, and really allow me to live in those emotions in the studio, which I think is something that can be hard to do. You know, the studio is this really forced emotional time, I guess, where you’re trying so hard to get perfection and to really catch lightning in a bottle, and that’s just not really how things work. I think, with the help of Jake [Luppen, producer and Hippo Campus member] and Caleb [Hinz, a Twin Cities musician, from the band The Happy Children], we got there more so than we ever have before.

Radio has been very good to the Greeting Committee. Both the Buzz and KJHK have spun the songs a lot—KJHK had you in for some in-studios, and the Buzz has brought you on for some live shows. It seems you were able to develop your live chops, as opposed to coming straight out of a Spotify or Soundcloud audience. I think we were really, really fortunate, right off the bat, to step into radio, and now, Spotify and Soundcloud. The new thing is to get onto Spotify playlists, and it’s nearly just as difficult as getting onto radio. I think Spotify playlists benefit you, because it boosts your monthly listeners, which can help create this facade of, ‘Oh, we’re big,’ when, really, something that the boys and I have learned, just from our previous touring history with other bands, is that’s not always entirely accurate. You can have a lot of Spotify streams but not be able to pull in a crowd. And then, you can have not very many Spotify streams and be selling out venues. It’s this very weird balance where the numbers aren’t very accurate these days.

Where that support is really helpful is radio holiday shows or summer festivals or whatever it may be. We’ve been very fortunate to have the Buzz behind us, and even the Bridge and KJHK. In Minnesota, Go 96.3 has really championed our music. In Columbus, we have CD 102.5, and they’ve been awesome. It does help bring people into a show. If you get put into rotation on radio, it can make a difference, and we saw that with [TGC radio hit] “Hands Down,” as opposed to our second EP, which we put out and did not have a single that did very well. There was a difference there. And so, what I think the Greeting Committee has figured out is that we’re not a super radio-friendly band, actually. “Hands Down” was just a rarity, I guess, because “Hands Down” doesn’t fit with really anything else in our catalog. Which is fine—I love it for what it is, and we wrote it, and we’re proud of it, and it got us to where we’re going. I would say that one of best strengths is probably our live show, and so getting out and playing just as much as we can is how we’ve learned to get our following up, whereas other bands may have mega-success on the radio, and that brings them in fans and whatnot. It’s a different path for everybody, but it’s definitely worth having every tool you can.

You all have been touring for a really long time. Did you start touring early on in high school, or did you hold off a bit until graduation? We started touring somewhat in high school. Our touring career has actually really picked up this year. We started out with an Arkells tour, then we had our headline run, which was our first-ever national headline run, and that went really well. We were really grateful for that. Rainbow Kitten Surprise, Bombay, and Hippo Campus are three of my favorite bands in the whole world. I remember very vividly getting the call about Rainbow Kitten Surprise and just losing my mind that we were going to tour with these people—and, they’re just as phenomenal human beings. And Bombay Bicycle Club, we’ve had a song about them since the Meeting People Is Easy era, so that was a dream come true, as well. I would say this has been a game-changer of a year, in a way.

Your last big solo hometown show was a sold-out performance at The Truman in December 2018. You’ll be at the Uptown in January. Is it exciting to start out 2020 playing a hometown show? It’s very exciting, and I think it’s more of a great closing to this chapter than it is an opening. In 2020, we’ll go into writing the second record, so that’s going to be interesting. I don’t know if any of us have any idea what we want to do. I know what we did with the EP was that we set out to ignore everybody besides the four of us. I think [TGC debut album] This Is It came from a point of a lot of pressure to have a record that sounded a certain way or accomplished a certain thing. That wasn’t us consciously making that decision, by any means. I think that was something we realized in reflection, and so when we wrote I’m Afraid I’m Not Angry, we said, “Hey, let’s just do this [as] the four of us, in Austin’s basement, like everything else.” None of us wanted anybody else involved. We don’t want management’s opinion, we don’t want the label’s opinion, we don’t want anyone’s opinion except for what we feel and what we think, and I think that has allowed us to create a product that we are extremely proud of. I’m hoping the second record is just an extension of that, and that listeners get another growth spurt from us, and that we feel another growth spurt, as well. We’ll see where that takes us, I guess. I’m excited—2020 is going to be an exciting year of creating, and then hopefully, the back half is filled with another headline run. That would be my goal.