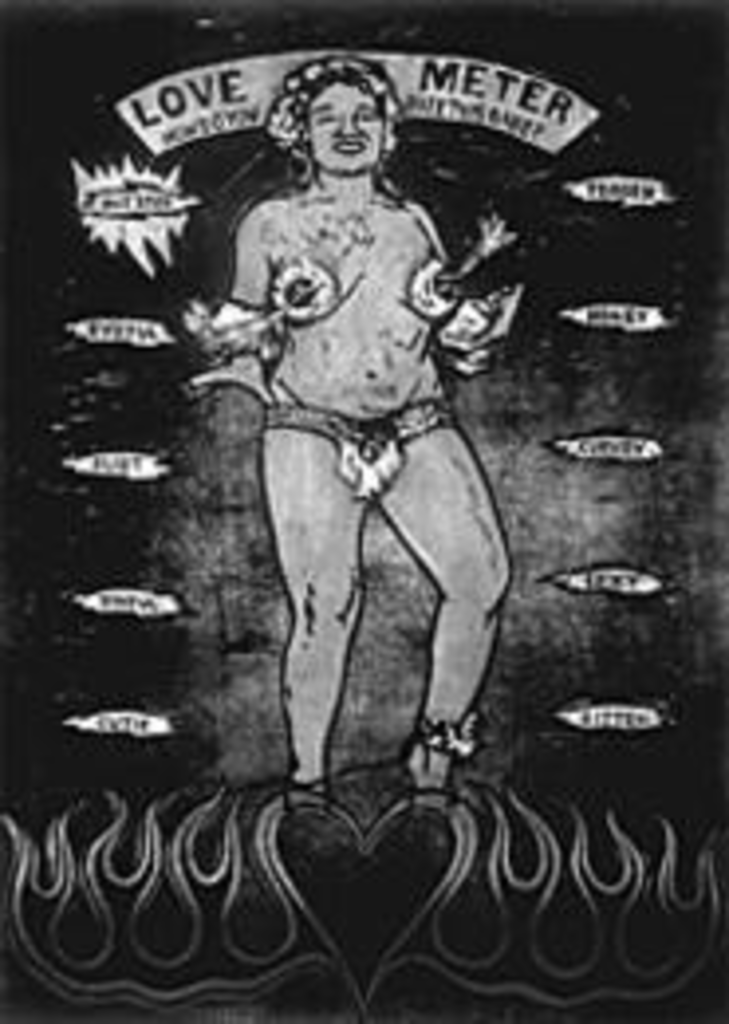 “I left Kansas City because I always had a problem with who I was and where I belonged,” says Latina artist Jessica Manco, who recently returned after spending the past few years in New York City and Mexico. “In New York, it was the first time I didn’t feel like the little brown girl,” she says. “I just felt like a person walking down the street.”

After attending Cooper Union and working in the art school’s print shop, Manco moved to Mexico, where she would have the time and space to be more prolific as an artist. Not surprisingly, New York and Mexico became settings for Manco’s paintings, some of which she has contributed to Mattie Rhodes’ Mujeres Fuertes show. “Coney Island,” for example, depicts two bare-chested women in headdresses, one smoking a cigarette and holding a toy sword, the other looking happily into the distance. Though the painting is rich with potential symbolism, the image was actually lifted from a photograph Manco took at a parade on Coney Island. The women were not posing, and Manco didn’t stage anything. “I just thought they looked really powerful up there,” she says.

In Mujeres Fuertes, Latina artists respond to culturally specific ideas of womanhood, and Manco’s work brings comic relief to a show that is often too serious for its own good. “I wouldn’t really consider myself a feminist or anything like that,” Manco says. “I just like to poke fun at things.” For “Hot Stuff,” Manco enlarged a tiny photograph of a 1950s poster that asked viewers to rate a dancing woman. Manco filled in the check-off boxes with her own ideas: Hot Stuff, Eyeful, Teaser, Honey, Flirt, Curvey, Sinful, Sexy, Cutie and Kitten.

This is the last week to catch Mujeres Fuertes, but in June, Mattie Rhodes hosts Manco’s one-woman installation Reflections, which will likely fill most of the available space.

That work centers on family — which is what brought her back from Mexico a few months ago. She returned to Kansas City at the request of her father, who was sick. Reflections, a multimedia piece she has been working on since his death, is a walk-in reconstruction of a house with each room dedicated to a different family member. In the final room, she has painted her father on the wall; he’s fallen asleep in front of a real television, which plays a loop of found video that Manco has spliced together.

In spite of the circumstances that brought her back, Manco’s return has not been tragic. The feeling that she doesn’t belong here has eased, along with the lack of diversity she perceived years ago. “Coming back, it feels like that’s changed,” she says. “Or like it’s changing, anyway.”

That doesn’t mean she’s sticking around, though. “After living in Mexico,” she says, “I have a travel bug in me. I’m already thinking about where to go next.”