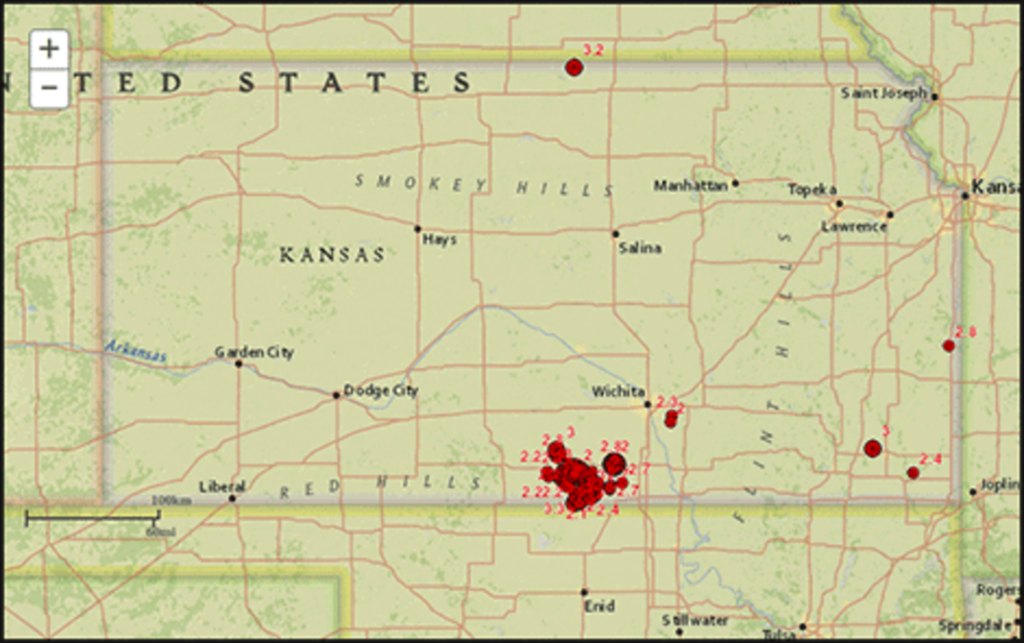 Down in Harper County, Kansas, a recent and sudden rise in earthquakes has caused structural cracks and damages to the courthouse, with repairs estimated at $1.1 million. In adjacent Sumner County — also located in the Sunflower State along the Kansas-Oklahoma border — earthquakes continue to damage homeowners’ walls and roofs. Last November, the largest earthquake ever recorded in Kansas occurred in Sumner County.

These quakes are new phenomena. From 1977 to 2012, only about 30 earthquakes happened in Kansas that were strong enough to feel, Rex Buchanan, interim director at the Kansas Geological Survey, has said.

From January 2014 until today, Kansas has experienced 113 quakes strong enough to require study by the Kansas Geological Survey.

In Kansas, the Kansas Corporation Commission has been slow to regulate the oil and gas companies. But an order it issued last week will require oil and gas producers to reduce the amount of waste saltwater that they can pump back into the earth. A gradual reduction will take place over the next 100 days, resulting in a 60 percent reduction in allowable disposal.

Jon Spease, chairman of the Hydraulic Fracturing Committee for the Kansas Sierra Club, says it’s a step in the right direction. “It’s a good start, and we’re grateful the KCC is acting on this,” Spease tells The Pitch.

But he says that because Harper and Sumner counties are located along fault lines, oil and gas companies need to relocate entirely from there.

“Recent reports by the U.S. Geological Survey make it clear that once faults are activated, reducing the amount of fluids isn’t going to help as long as any fluids at all are still going into those wells,” he says. “People say, ‘There’s all kinds of drilling going on in North Dakota, how come they’re not having these crazy earthquakes?’ It’s because those sites aren’t located along geological fault lines where rocks can slip and cause earthquakes. When these wells are located near faults and you inject fluids, things just start slipping, and that’s what’s happening in southern Kansas and Oklahoma, which are part of the Arbuckle formation.”

Once those faults have been activated, Spease says, it will take a period of absence of injection to halt the earthquakes. “So while we’re appreciative of any action on this, what really needs to happen is, these companies completely stop using these wells on sites located near fault lines.”

You can do that here or by e-mailing the Sierra Club at Earthquake.action@gmail.com.