A sick, toxic summer of health care ends in a trip to the surgery center 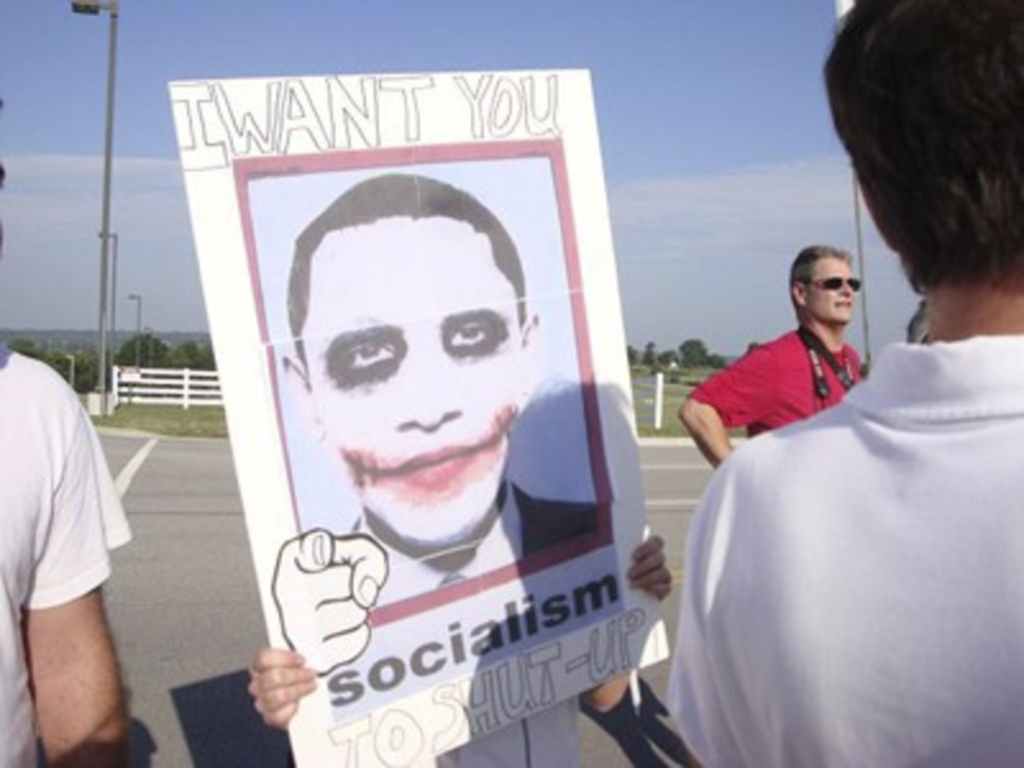 On the Friday-morning ride to the surgery center, I shouldn’t really be thinking about work. I should be relaxing, telling myself that everything’s going to be just fine. Instead, I’m thinking about health-care reform.

I’m not worried about the surgery — it’s minor and routine for women of my age. But I’m dreading my immersion into the American health-care system, even for a day. I know how lucky I am to be healthy, to not have to spend much time in doctors’ offices. But because of my job, over the past few weeks I’ve been exposed to all of the toxins infecting my country and its medical system.

On August 8, I spent a sweaty Saturday morning outside a coffee shop in Lee’s Summit, where hundreds of people showed up to, under the guise of opposing health-care reform, yell at Rep. Emanuel Cleaver for being a Democrat in the Obama administration. These people held up placards depicting Obama in whiteface (like Heath Ledger’s Joker in The Dark Knight) but denied that their signs were racist. One woman told someone standing near her, “If you like socialism, you need to go to Russia and enjoy the wonderful communistic, socialistic society. And get the hell out of my country.” One of these patriots looked like a second-grade teacher, except that she hurled invectives at her congressman.

I attended Sen. Claire McCaskill’s less rancorous, but still tense, August 24 town hall at UMKC. And I sat through the August 26 stop on Rep. Sam Graves’ “Main Street Matters Listening Tour,” where north-of-the-river Republicans gathered in the Park Hill High School gym to complain about how they’re oppressed by a new, communist administration that’s destroying the Constitution by forcing health care on an otherwise free people.

Meanwhile, I added up health-care campaign contributions for everyone in the metro’s congressional delegation. Totals ranged from the anemic $9,500 on Cleaver’s books to the astounding $525,000 — in medical-industry money alone — banked by Kansas Republican Sen. Pat Roberts, a member of the Committee on Health, Education, Labor and Pensions. In between: $11,500 for Kansas Republican Sen. Sam Brownback (who faced no real opposition in his last election); $20,500 for Missouri Sen. Kit Bond in 2007 and 2008, though his last election was in 2004 (earlier this year, the Republican announced that he would retire rather than run again in 2010); $33,129 for Kansas Republican Congresswoman Lynn Jenkins; $62,000 for Rep. Dennis Moore (one of the now-notorious Blue Dog Democrats supposedly stonewalling the Obama administration’s reform efforts); $85,000 for Missouri Republican Graves; and $132,000 for McCaskill (who spent a lot of money from all over the country to win her fiercely contested race against Jim Talent in 2006).

I’ve been reporting on the topic since February, when I started driving to Topeka to reconstruct Gov. Kathleen Sebelius’ troubled efforts to reform health care in Kansas. That article, “The Cure From Kansas,” ran on April 9, just as Sebelius was headed out the door for her job as secretary of Health and Human Services in Washington — where, apparently, she wasn’t able to teach Obama anything about trying to make too many changes too fast. That story was in The Pitch‘s print edition, as was Carolyn Szczepanski’s June 11 cover story, “House of Pain,” about the big babies who masquerade as members of the Missouri House of Representatives and their own “debates” about providing health care to poor people. Also running in print was David Martin’s August 6 column, “Sick Chamber,” exposing the Chamber of Commerce’s backward logic in opposing publicly provided health care.

But most of The Pitch‘s health-care reporting has been on our news blog, so print-only readers might not know how hard we’ve worked to chronicle this nasty, ridiculous, stupid summer, during which one of the most difficult and important issues of our generation has been eviscerated by Sarah Palin’s lies about death panels and Roy Blunt’s lies about Canadian hip replacements.

These things are on my mind on the ride to the surgery center, where I’ll soon be going under a general anesthetic. And because I can’t stop worrying about all of it, I imagine for a moment that the drugs flowing through the IV will be tainted with the poison of the summer’s discourse.

In pre-op, as a friendly nurse finds a vein, I can’t help overhearing the furtive whispers of the couple in the next bay. Behind the flowery curtain that separates one family’s day at the surgery center from another’s, the wife has decided that maybe she wants an additional procedure, and the husband has called the insurance company. They seem to be arguing quietly about whether to go through the insurance company or pay cash, which might be cheaper. I don’t have my pen and my notebook, and it’s none of my business anyway.

But I notice everything in the room — the syringes in sanitary plastic wrap, the bag that holds my clothes, the package of warm hospital socks — and figure that it’s all adding up. I’ve heard too many arguments for switching to electronic health records not to be annoyed by all the pieces of paper I’ve seen surgery center staffers fill out today. But other than my $100 co-pay, I’m as ignorant as any other American with insurance and have no clue what this day really costs.

And I can’t help marveling at how we don’t even have some surgeries in hospitals anymore — now we can go to a freestanding building where everything is streamlined and designed to get us home by the end of the business day. Whether it’s here or in a hospital, though, I imagine, the pre-op nurses in their colorful scrubs are probably a little worried about all this talk of health-care reform.

I want to ask my nurse what she thinks of the summer’s politics, but I don’t. It’s best not to distract her, I tell myself. But I’ve watched people arguing about health care for weeks now — if anyone should be freaked out, it seems like it should be the people here. Instead, all of these nurses and doctors are just doing their jobs — and doing them well.

This is a day in the life of 16 percent of the country’s gross domestic product — these efficient professionals, all of their syringe suppliers and medical-waste haulers, and the construction workers who build these surgery centers and medical office buildings, and the insurance industry’s parasitic paper pushers — that not only is too big to fail but also apparently too big to touch.

Someone puts a clear plastic mask over my face, and for a couple of hours I am oblivious.

I’m not exactly happy to emerge from the obliviousness. Now there’s a different nurse, just as nice as the previous one, but she’s on a different mission. I am to wake up. I am to drink this water. After a while, I am to stand up and walk over to the bathroom and get dressed, while my friend goes and gets the car.

But here, the nurse says, she’ll give me this — “to ward off evil spirits.” She’s handing me something to take on my ride home, but it’s as if she knows what I’ll be thinking about when Congress goes back to work in a couple of weeks.