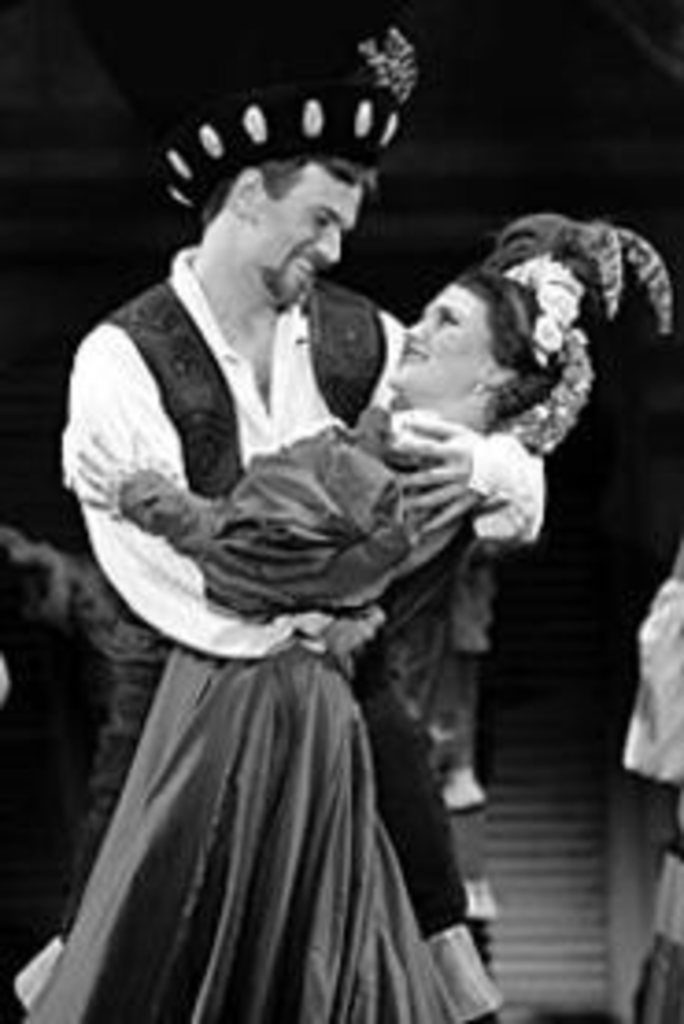 Kiss Me Kate is Shakespeare made hummable by the music and lyrics of Cole Porter. With such songs as “Too Darn Hot,” “Another Op’nin, Another Show” and “I Hate Men” (not a condition ever suffered by Kiss Me Kate‘s composer), the show turns The Taming of the Shrew into a play-within-a-musical about warring theater stars forced to mount a production a year into their divorce.

The Theater League brings the show to town as part of local performing-arts groups’ yearlong campaign to ensure that audiences brush up their Shakespeare. After it premiered on Broadway in 1948, the show ran for 1,077 performances. It didn’t hurt that the critics raved; Richard Watts Jr. of the New York Post, for example, noted that he’d experienced “the electric excitement that comes to the theatre when everything goes right.”

The current non-Equity tour is inspired by the hit Broadway revival of the show, which won Brian Stokes Mitchell a Tony Award in 2000. Playing the dual Mitchell roles of Broadway legend Fred Graham and Shakespeare’s Petruchio is Dexter James Brigham — a native of Princeton, Illinois, whose résumé includes experience in heavy metal as well as light opera. We talked to him when the tour recently stopped in Duluth, Minnesota.

“The show takes The Taming of the Shrew and wraps it in a backstage story between egotistical actors,” Brigham says. “It’s fairly complicated when it comes down to musical plots, but [authors Bella and Samuel Spewack] tell it with such deftness that you don’t notice.”

Brigham is based in New York City, where he works off-off-Broadway “on a job-by-job basis” while developing his own theater group, November Ten. He agrees that singing Cole Porter’s sophisticated lyrics night after night can’t help but make him smarter.

“I can’t decide who’s the better lyricist, Porter or Stephen Sondheim,” he says. “As a songwriter myself, I’m a huge fan of [Porter’s] brilliant rhythms and alliteration. And unless you really pay attention, three-quarters of his skills can pass you by.”