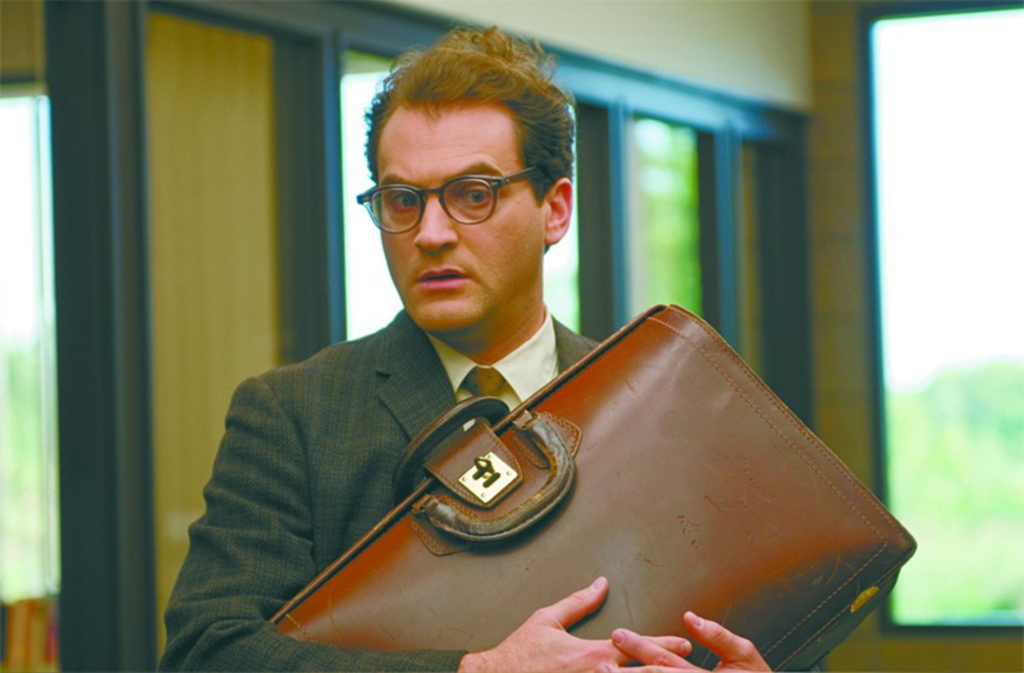 The Yiddish shtetl shtick that opens Joel and Ethan Coen’s new movie — a Jewish peasant stumbles on an old Hasid who may be a Dybbuk — is pretty clumsy, but at least it tips its hat to the great existential comedy that A Serious Man might have become if it weren’t buried beneath an avalanche of ugly Jew iconography.

Set in 1967 in a Midwestern Jewish neighborhood with a strong resemblance to the one the Coens grew up in, A Serious Man is crowded with fat Jews, aggressive Jews, passive-aggressive Jews, traitor Jews, loser Jews, shyster Jews, Jews who slurp their chicken soup, emo Jews and — passing as sages — a clutch of yellow-teethed, know-nothing rabbis.

At their center is beleaguered academic Larry Gopnik (played by the excellent stage actor Michael Stuhlbarg), a decent geek clinging desperately to his rapidly shredding status quo. Larry’s wife, Judith (Sari Lennick), a stout matron with all her discontent lodged in her curled upper lip, announces that she’s leaving him for Sy Ableman (Fred Melamed), a stuffed-shirt widower given to inflicting mandatory hugs on those he screws over. Larry’s daughter (Jessica McManus) is filching money from Dad’s wallet to pay for a nose job (now there’s a novel gag); his son (Aaron Wolff) is strung out on television, Jefferson Airplane, and God knows what else while nominally preparing for his bar mitzvah; and Larry’s chronically unemployed brother, Arthur (Richard Kind), sleeps on his couch.

Meanwhile, just so you know that the Coens are equal-opportunity practitioners of the ethnic slur, Larry, who is up for tenure, is being set up by a Korean graduate student who talks funny and is unhappy with his failing grade. To cap it all, Larry’s pneumatic pothead of a neighbor (Amy Landecker), the sole looker in sight and therefore probably a shiksa, provokes the only proactive behavior timid Larry is ever likely to take — in his dreams.

By way of plot, Larry suffers buckets of abuse from this crew, then seeks spiritual guidance where none is forthcoming until, either by accident or grand design, his life seems to get better all by itself.

If this were it, the movie would be no more than another dreary exercise in Coen sadism. But the visual impact of all these warty, unappetizing Jews (even the movie’s obligatory anti-Semite looks handsome by comparison) carries A Serious Man into the realm of the truly vicious. And God help the rube who can’t take the joke.

I try not to second-guess my colleagues, but would the desire to be hip be why I’m hearing the Coens compared to Philip Roth, one of the world’s least self-hating Jews if you read him right? Would this be why, in a poll conducted by Indiewire at this year’s Toronto Film Festival, critics — among them many Jews — voted A Serious Man the festival’s best film? They’re entitled, but I worry (especially given the indifferent shrug with which the North American film fraternity greeted British director Ken Loach’s vile comments this past summer that, in light of Gaza, a rise in anti-Semitism is “understandable”) about what ancient anxieties lie behind the endorsement of a movie that dumps on Jews and Judaism with such ferocity.

When man makes plans and they fizzle, is that God laughing or the devil? Or is it the randomness of a world without meaning? A Serious Man might have shown that we’re at our funniest, most abject and most endearing when we look in vain for answers to our common hurts and losses.

As usual, though, the Coens have more venal satisfactions in mind. “The fun of the story for us,” they crow in the notes for this loathsome movie, “was inventing new ways to torture Larry.”

Is A Serious Man a work of Jewish self-loathing? Hard to tell, if only because — aside from Fargo‘s Marge Gunderson, one of the great creations of American cinema — just about every character the Coens create is meant to affirm their own superiority.