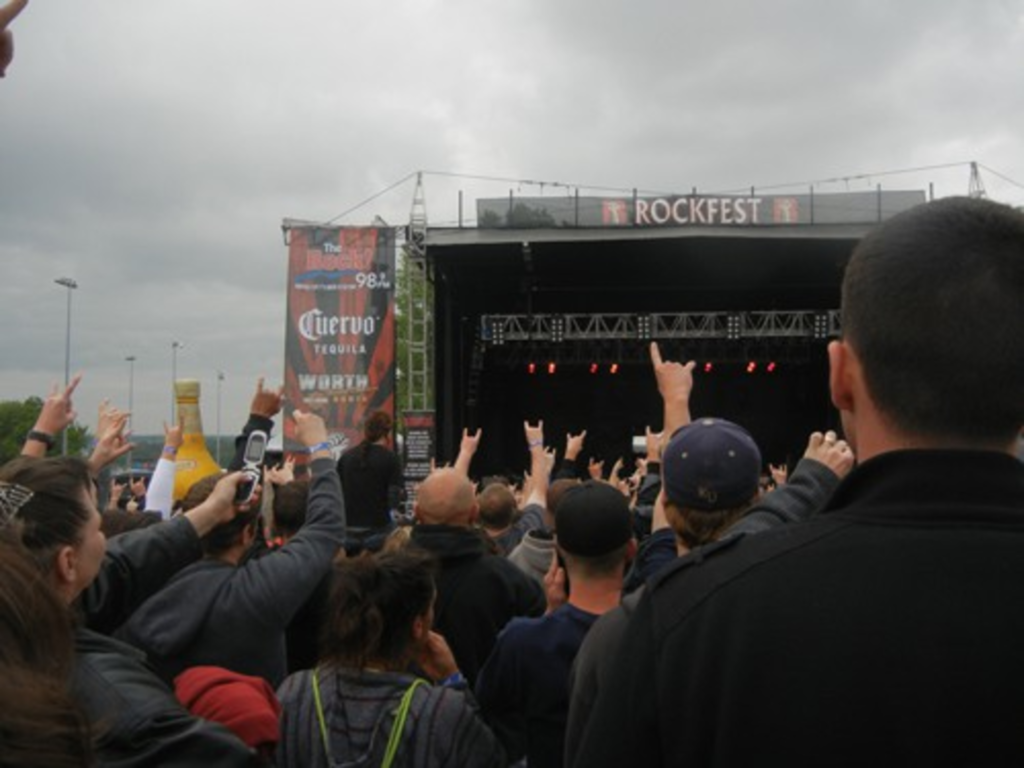 Before this fated Saturday, I was innocent of the sweat, blood, booze and rock that descends on Liberty Memorial each May. That time is no more. Here is a brief smattering of facts I’ll use to describe the looming, epic one-day fest that is 98.9 The Rock’s Rockfest. 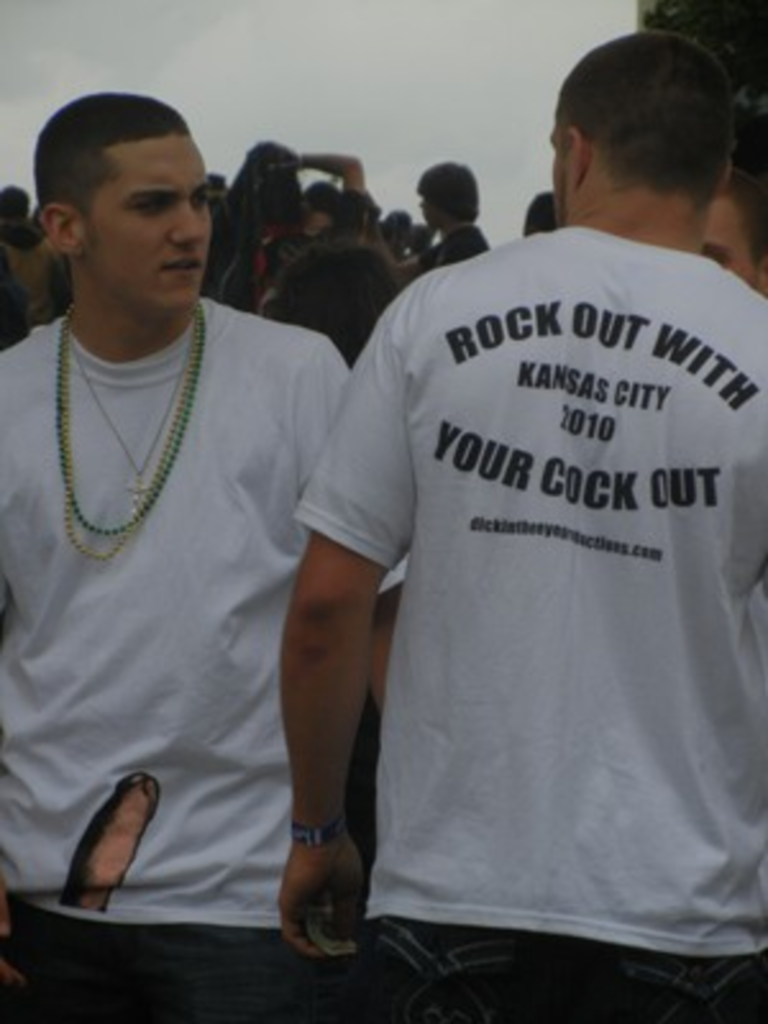 Five of the best T-shirts that I saw at Rockfest:
– Have you hugged your toilet today?
– My cock + your pussy = good times.
– All of your hopes and dreams don’t mean shit.
– I’d fuck me.
– I have a dick so I make the rules.

Number of bare breasts that I saw at Rockfest: six.

Number of pairs of women’s panties that I saw hanging from Liberty Memorial Park’s trees: three.

“If you stare in any one spot long enough, you’ll see some bullshit,” my fellow concertgoer Berry Anderson wryly observed. Red Line Chemistry was backstage, and sound-check guys plinked and plunked on instruments on Rockfest’s smaller second stage. In front of me, a man donned a leather vest and a beard that was half-dyed red. To my right, a group of high school kids toked on a glass pipe picked up at a festival booth minutes before. Behind me, a chubby girl stood in a plaid bikini that was far too small for her, crossing her arms over her torso — it was, after all, 57 degrees. To my right, a pre-teen girl in a gigantic neon-pink jacket huddled next to her mom, eyeing the stage with anticipation. (The day was unseasonably cold and overcast, hiding most of Kansas City’s skin — and tattoos — under hooded sweatshirts.)

“Are you ready to make some Kansas City noise for some Kansas City boys?” Tattooed forearms flashed bullhorns toward the crowd. Someone waved a bouquet of fake sunflowers toward the stage. “Put your hands together!” the band’s frontman cried. (A despondent voice behind me responded: “I ain’t only got but one.”)

Red Line Chemistry’s sound was melodic but unremarkable: The crowd boasted a spectacle that was far more interesting than anything onstage. Wading through throngs of people while Red Line Chemistry whipped out a clumsy cover of Tom Petty’s “Running Down a Dream,” Berry and I passed a young girl who was topless, holding her friends’ hands as the group weaved through the crowd. Brightly colored Mardi Gras beads jangled between her bare breasts. It took me a second to process my first Rockfest flesh.

Berry replied, “Yes, those were tits.”

Steps later, we found her black-sequined bra top discarded on the ground.

Of course, this wouldn’t be the last pair of boobies that I’d glimpse during the day. Plenty of men in the crowd snatched up hordes of metallic beads, in exchange for glimpses of flesh. (One guy even had a cardboard sign: “Beads for boobies.”) During Alter Bridge‘s set on the main stage, a tan girl in a black tank top whipped out her breasts and jiggled them at four or five guys (several of whom were recording it on their cell phones). She smiled, grabbed her beads, and walked away. One guy, awestruck, said to his buddy: “That was the best one yet!” His friend: “Dude, I know!”

Despite the debauchery, though, people were profoundly respectful. Concertgoers didn’t cut in line, and when they did, they apologized. Hands were shook and laughs were had between strangers. Everyone was there to rock; everything else was secondary. Kids passed out in the grass all over the festival were given personal bubbles of space, even when they were sprawled within prime stage real estate.

Though Alter Bridge’s set was muscular, Myles Kennedy’s voice proved a bit too reedy for my taste. My lukewarm reaction seemed to be the norm, though: A lot of people were more interested in smoking, chewing on gigantic turkey legs and pounding Miller Light than paying strict attention to the stage. (To be fair: I also spent a majority of the show at a distance. I wanted to avoid the possibility of getting brained by a crowd-surfer’s Nike; and, besides, I had to concentrate on the tongue wars that were being waged all around me by scantily clad couples — not to mention finishing my plastic cup of purple Sparks.)

Later in the evening, Papa Roach‘s taut, kinetic energy was infectious — even from half a mile away, where I watched Jacoby Shaddix whip the crowd into a frenzy on a gigantic screen. I wanna watch you burn, Shaddix roared. “Yeah, you like that? Fuckin’ Rockfest, getting rowdy!”

The smell of weed curled around the crowd. Puffs of smoke emanated from huddled groups of fans. Kids in drug rugs dove forward in the crowd, and girls in cut-off shorts grinded their hips to the deep, dirty riffs. “This song is like smoking crack,” Shaddix exclaimed. “Sometimes, a song is what you need to drag you out of that fucking hole,” Shaddix said, before laying into “Scars.” People sang along fervently.

I would have loved to stay to see Disturbed — simply to watch the crowd lose their shit to the opening riffs of “Down With the Sickness” — but, unfortunately, four hours of undiluted rock had left me drunk, dirty and spent. Festival fans still trickled in as I followed the path leading toward Main Street paved with empty beer cans and trash. Behind me, the party raged on.