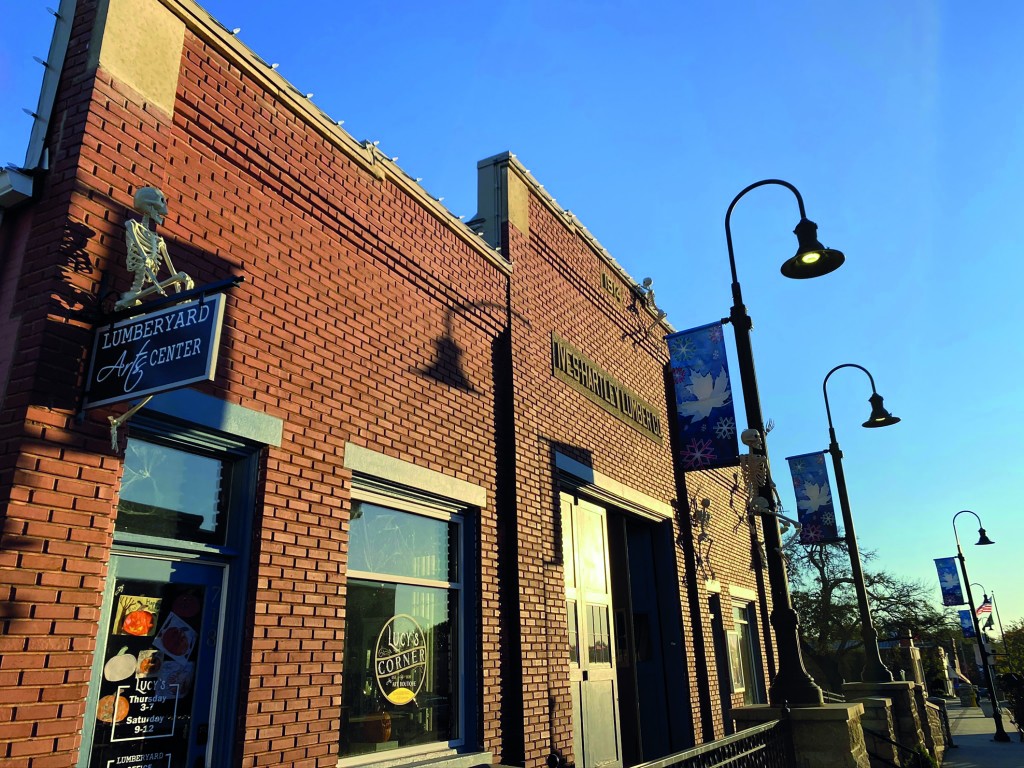 Baldwin City is not known for live music, which is odd considering that it’s home to Baker University, a college with over 2,500 students. While that’s less than one-tenth the population of the nearby University of Kansas in Lawrence, one would think there’d be an open mic night or something at a local watering hole. Sadly, that’s not the case.

“When I first moved here, my first thing was like, ‘Oh, I got to find somewhere to play in Baldwin,’ and the only place was a worship music circle, which is not my thing,” says singer-songwriter Megan Luttrell, a resident of the city for the last three years.

She says that the only dive bar in town, the Salt Mine, had just closed. The only bars to speak of are The Nook, which is also a bookstore, and The Office, a lounge in the Lodge of Baldwin City, located on the main drag through town.

Luttrell is happily looking to change all that, in conjunction with the Lumberyard Arts Center, located in the renovated Ives-Hartley Lumber Co. building in downtown Baldwin City. As Jeanette Blackmar, the Arts Center’s director, says, this has been in the works for a couple of years. The Lumberyard Arts Center went through some strategic planning work and thought about how to diversify, increase, and broaden their audience, as well as better serve their mission.

“That began a conversation of looking at our mission and what we do and who we serve,” says Blackmar, who continued to explain that last year the Arts Center noted a real uptick in community interest in more live music.

“The Lumberyard Arts Center never really did any music or touring groups—no focus on that,” says Blackmar. “We use music as a fundraising mechanism, so we would have a bluegrass barbecue when we would raise money for the Arts Center. This program that we developed really wanted to take seriously creating a sustained live music program. That’s kind of how it began and we wanted to do it extremely well.”

Thanks to a planning grant from the Kansas Creative Arts Industry Commission, funded through the National Endowment for the Arts, the Arts Center was able to hire someone to lay the foundation and develop the program in its planning period. That person happens to be Meghan Luttrell—although the musician is quick to admit she was quite surprised to find out what it all meant.

“They were telling me, ‘Oh, we got this grant to start a live music program,’” laughs Luttrell. “I didn’t understand at the time the grant was to pay me to be a consultant. I was like, ‘Oh, so I’m going to volunteer. Cool,’ And they’re like, ‘No, no: we’re going to hire you as a real adult person to help with this.’ We have this planning grant that is funding me to be a program developer to just make my live music dream come true. That’s what they said: ‘Just do what you’ve always wanted to do.’ And now I can.”

The plan is directed by Luttrell’s knowledge of the local music scene—bolstered by several years of hosting open mics and the monthly women’s musical showcase at Lawrence’s Kaw Valley Public House—as well as input from the Baldwin City community. The Lumberyard Arts Center and Luttrell put together two separate surveys.

One, a general community survey, was to figure out what genres of music people like, what sort of events people would be interested in, any concerns they had, how often they would attend, and why they wouldn’t attend if they decided not to.

“The only concern really that people had was COVID-19, which of course is a huge concern for us, too,” says Luttrell. “But everyone was overwhelmingly excited and positive. Just really excited: ‘I’m so happy this is coming to Baldwin!’” 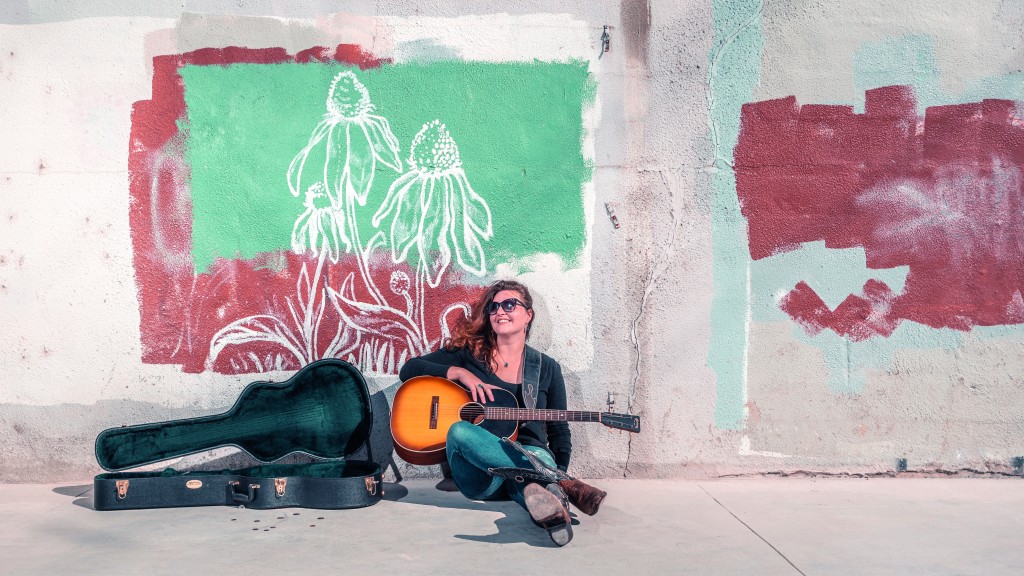 Luttrell made the second survey specifically for musicians. She wants the Arts Center to be something that helps amateur and professional musicians alike with their development, not just a center for live performances. The questionnaire asked about what kind of music they played, if they would play or lead a workshop for the center, and where they need the most help in terms of development.

“We have Folk Alliance obviously, but not everyone can attend that,” Luttrell explains of the development aspect. “Maybe a workshop on copyrighting your original music, because that’s a complicated thing to navigate, or how to get on a streaming service or a songwriting workshop. We want to do a music career panel—these kinds of things.”

Given that the Lumberyard Arts Center has been in place for over two decades, Luttrell made sure the live music initiative tied into other programs of the center’s programming. “Obviously we don’t want to take away from anything that’s already happening there,” Luttrell says. They plan to pair programming with the Third Friday Art Walk—sometimes providing music for the events as well. That way it will be a mutual event, rather than counter-programming against it.

“We’re just making sure that we’re scheduling around events that are already scheduled, so we’re not competing or taking away attention from that,” Luttrell says. “We’re considering doing some of our workshops as a class offered by the art center. That’s one thing we’re working on right now—figuring out formatting and ‘Is it going to be an actual class people sign up for, or is it going to be a separate workshop?’”

Luttrell plans to work with others in the community with her live music program. They want to work with the Baldwin City Academy of Dance and Voice to have live music in a dance class where people can potentially learn salsa while a live salsa band performs.

“We’re working within the community and pairing with people as opposed to having something as a competing force,” Luttrell says. “We don’t want to just come in here and bust things open: ‘Okay! Live music and that’s all there’s going to be!’ It’s an art center and music is just one art.”

Despite the fact that mask mandates are waning and vaccinated folks are being given the okay to mingle sans-masks, there are some who might feel uncomfortable gathering inside. Thankfully, Baldwin City recently built Sullivan Square, an outdoor space directly adjacent to the Lumberyard Arts Center, with a covered stage and an area for blankets or folding chairs.

Blackmar mentions that the eventual vision for the Lumberyard Arts Center is to make a public-private partnership. She imagines a partnership between Sullivan Square and the Art Center. The partnership would develop it into a creative arts complex. Creating it in a way which ties back to a history that predates the Ives-Hartley Building where the Arts Center is based.

“Sullivan Square is named after Baldwin City’s first female mayor, Lucy Sweet Sullivan,” Blackmar explains. “She was mayor in 1889. There was a house there and it was the convening space of town and gown. It brought the Baker students into the community, and they had parties and music and events. So here we are in 2021, coming full circle to the realization of getting back to Sullivan Square being the hub of community activities, specifically with live music events. It’s really exciting.”

The plan for the Arts Center’s live music program is to rope in as many genres as possible. Not just the folk-Americana with which she’s identified, but with performers from the community, Baker University, and the surrounding areas.

From Johnny Cash karaoke after a screening of Walk the Line to jazz under the stars, the sky’s the limit in terms of creative concepts. Thanks to a second grant from the National Endowment for the Arts and the Kansas Creative Arts Industry, which the Arts Center and Baldwin City teamed up on to fund performances, Luttrell is looking to book a lot more acts in the coming weeks.

“It’s for the people of Baldwin, but we also want to bring people to Baldwin and stimulate the local economy,” says Luttrell. “We don’t get a ton of tourism other than the big Maple Leaf Festivals, so we want to have it help us make Baldwin a destination for the arts.”

“What we hope to do is to provide promotion and support and exposure for new artists who are just getting their feet on the ground,” Balckmar says, seconding Luttrell. “The hope is to showcase local talents, and who knows? Maybe they can say that they were found here and got their beginning at the Lumberyard Arts Center.”