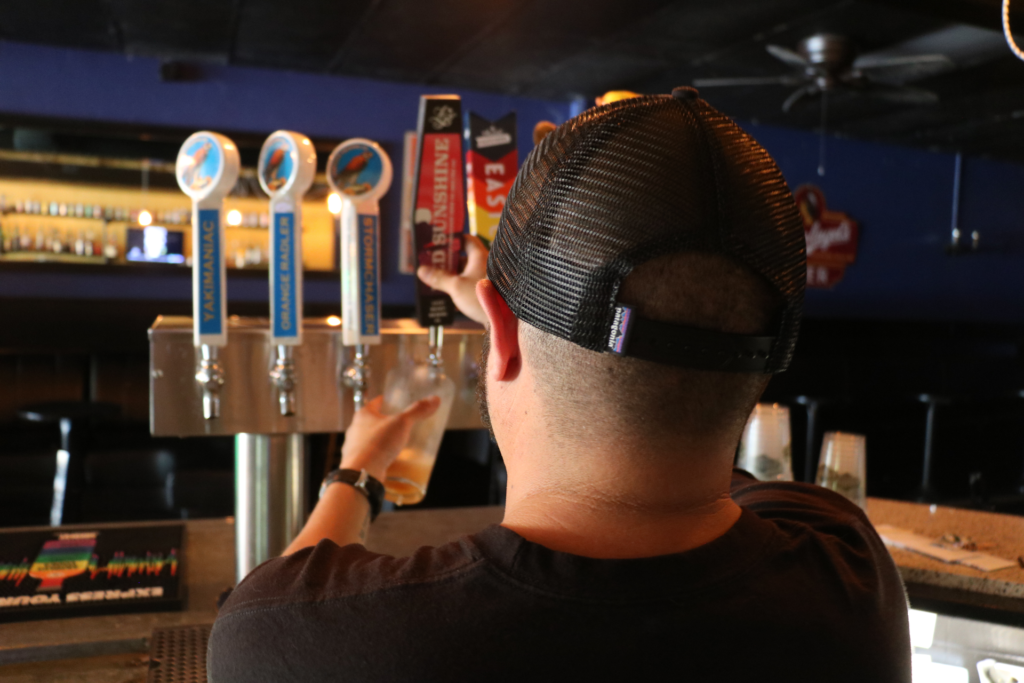 For a guy who runs a bar and music venue in a busy college downtown, Matt Delvecchio is surpisingly publicity-shy. A self-described introvert, the new owner of the Jackpot Music Hall needed five minutes of convincing before he’d let me shoot the picture above, which, as you can see, he only allowed to be shot from the back.

Delvecchio has run the Jackpot since early January, and he and his wife, Sarah, officially took over the venue in March. Among other things, Delvecchio was previously involved with the Lawrence Freenet project, an attempt to create a local internet service provider to rival Lawrence’s Sunflower / Knology / Wow! / MidCo juggernaut. (Lawrence Freenet morphed into Wicked Broadband, which remains a going concern.) After leaving Wicked Broadband, Delvecchio started his own security and mobile support firm, but that didn’t work out. Then one day he had a chat with Nick Wysong, owner of downtown restaurant Ingredient. In addition to owning Ingredient and its neighbor, Five Bar & Tables, Wysong had acquired the Jackpot at the beginning of 2017.

“He actually did me a real solid,” Delvecchio says. “He says, ‘Look, this is happening over here, but there’s an opportunity for you to pick this up [the Jackpot] on the cheap, if you want,’ and that was kind of the opportunity I was looking for.”

Plus, Wysong was willing to let Delvecchio do a little “try before you buy” — running the venue during the shows that were already on the books.

“The [music venue] industry never really scared me,” Delvecchio says, adding with a chuckle: “I never let not knowing what I’m doing stop me.”

The new Jackpot makes for an interesting case. Delvecchio isn’t the usual stars-in-his-eyes promoter seeking to open a venue to showcase the music he loves. He definitely enjoys music — with a huge smile on his face, Delvecchio later tells me the story of opening the bar early and blasting Cradle of Filth with a bunch of metalheads prior to a recent big show at the Granada —  but the Jackpot’s new owner doesn’t feel like what he likes should have any bearing on anything.

“I don’t really know how relevant that is,” Delvecchio says when I bring it up. “I just wanted a job where I could spend time with my kids.”

He credits his wife and his crew, which includes sound engineer Chandler Lightfoot and door guy Sol Hernandez — “Team Jackpot” — with bringing about the Jackpot’s rebirth, as well as as helping kindle his love for doing it.

And coming up this weekend is one of the biggest shows the Jackpot will have hosted under the Delvecchios’ ownership. The seventh annual Lawrence Field Day Fest runs Thursday and Friday nights, occupying multiple venues throughout downtown Lawrence. And the Jackpot itself will play host to 20 artists over the course of three days. 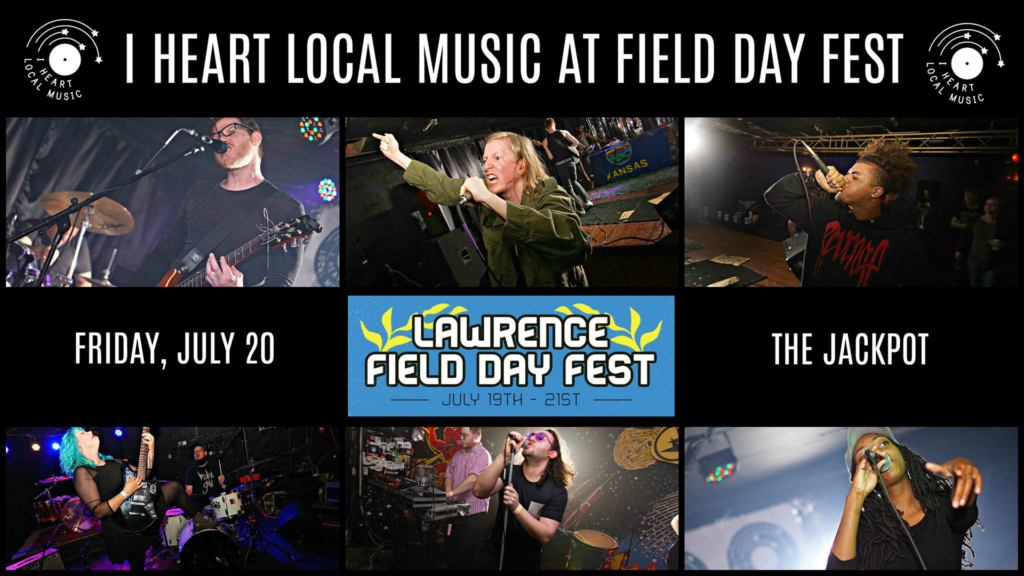 While it might be the first Field Day Fest for Delvecchio, one of the people now regularly booking shows at the Jackpot has quite a bit of experience with the long-running music festival. For the second night of the fest, the Jackpot plays host to the I Heart Local Music showcase, presented by the Lawrence website that has tirelessly documented the Lawrence music scene since 2011. Founded and run by editor Fally Afani, the site has been instrumental in helping Delvecchio rehabilitate the Jackpot’s somewhat tarnished image. It was her Instagram photo that clued most people into the fact that there was a new owner running things.

“When I heard there was a new owner, I went to sniff him out,” Afani says with a laugh. Darla Kubala, who along with her husband, Eric Berman, was the former co-owner of the Jackpot before Wysong took it over, and Afani and several other folks in the scene had a great working relationship with her.

Afani was thrilled to discover that Delvecchio not only had plans to continue booking shows, but to resuscitate the Jackpot’s relationship with the local music scene, which she says had soured under the previous management. Over the course of several further conversations, it became clear to Afani that the Jackpot’s new owners wanted to make the venue a nice place for bands not just for money, but for the community.

“That really sat well with me,” continues Afani.

Delvecchio then mentioned that the whole concert booking situation had been left in a bit of disarray. Afani said she’d help get things going again if he was interested.

“Then I just stayed,” she says.

It’s been interesting, Afani says, because she has to keep the shows she books at the Jackpot separate from the journalistic aspect of I Heart Local Music. She doesn’t overly promote shows booked at the Jackpot on the website, unless they’re specifically I Heart Local Music-sponsored events, such as the Field Day Fest showcase, or last month’s launch party for the print magazine edition of IHLM.

“It’s really become a great home for live local music,” Afani says. “The vibe’s been really calm, and when there’s a show, everybody enjoys watching the music, and then you can go outside and like, chill out and talk and not just be drowning in club kids.”

“That’s just a stunning and well-done festival,” she says. “It was born out of a really good place, just to promote local acts, and while it’s gotten bigger now, I try to do my part with the showcase. We always keep a very diverse lineup with bands that are really lively and fun to watch, so that’s kind of been our M.O.”

As for Delvecchio’s take on running the Jackpot so far?

“We care about it more than I ever thought we would,” he says. “The people [in the Lawrence music community] are dope. The way folks will bring gear from other venues, and how they all work together? To watch that happen? That’s cool. They really care.”