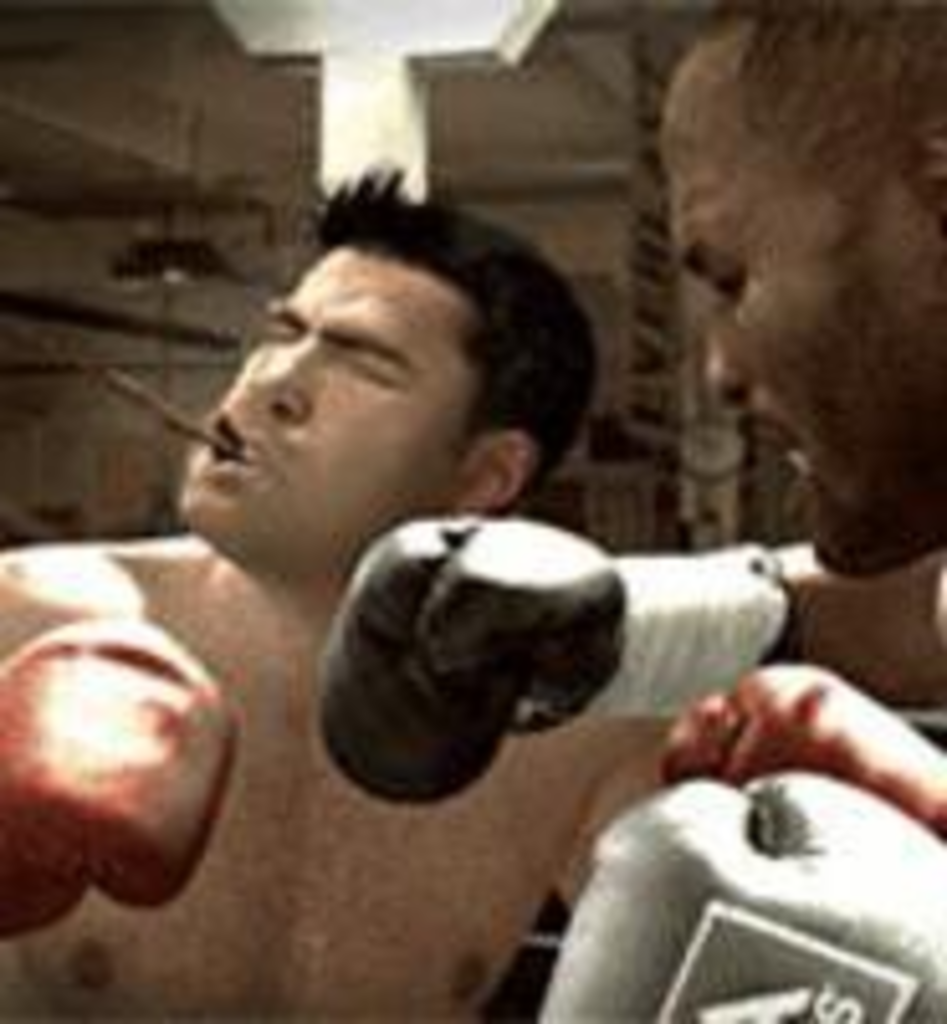 Gamers have a derogatory name for people who prize a game’s visuals above all: “graphic whores.”

But sometimes great graphics can enhance game play — or even provide an experience that couldn’t have occurred otherwise. Fight Night Round 3 for the Xbox 360 is a perfect example.

The boxers in the game — especially famous faces like Evander Holyfield and Muhammad Ali — look stunningly realistic, from the way sweat beads on their bodies to the grimaces they make when they catch a crushing right hook to the ribs. Skin looks like flesh rather than plastic, cuts look painful, and by the 10th round, fighters actually look exhausted. While a boxer’s robotic movements will occasionally take you for a stroll down Uncanny Valley, FNR3 is still the best-looking videogame on the market, period.

But pretty graphics (inasmuch as Joe Frazier with a swollen eye and bleeding lip can be called “pretty”) aren’t the most important thing, right? Well, in this case, they are. Because the fighters look so real, the game becomes that much more absorbing. When your boxer takes an uppercut to the face, you’ll wince; catching your opponent with an uppercut will inspire sadistic glee. Make an ultrarealistic likeness of yourself and your friend in the create-a-boxer mode, and the bout quickly becomes even more personal.

In fact, the ability to create your own boxer is the game’s most enjoyable feature. Unlike Soul Calibur III, which had a create-a-character feature but no way to show off your creations, FNR3 lets players take their custom pugilists online. You can recreate the faces of boxers missing from the game (Tyson, Foreman) — and also those of your next-door neighbor, your old boss, and the kid who bullied you in the third grade . . . anyone you think deserves a punch in the shnoz.

Players who are not graphic whores will be pleased to know that the game play is more than a match for the visuals — FNR3 once again uses the series’ “Total Punch Control” system, allowing players to throw any punch in the game with a single analog stick. It can be a little tricky at first for the uninitiated, but once you get the hang of it, throwing leather becomes second nature.

It’s a good thing that FNR3 features such striking visuals and entertaining game play, since it also has a laundry list of minor problems that keep it from greatness. While the sound effects are terrific — every punch a satisfying thwack, every gasp audible — FNR3‘s puny hip-hop soundtrack becomes painfully repetitive after a few plays. And the fight commentator repeats himself constantly — after hearing him talk up the “Philly Shell” defense for the 800th time, you’ll wish Mike Tyson would gnaw your ears off.

The online mode — a blast when you’re actually in the ring — is simplistic to a fault, offering you few options for customizing a bout. Especially annoying is the fact that the game kicks you back to the title screen after each online fight; there’s no option allowing you to stay with the same opponent, adjust the settings, and have another go at it.

For months, videogame critics have been asking whether the Xbox 360 is “next-gen enough.” Well, FNR3 ends the debate with a skull-splitting haymaker. If all the little problems had been fixed (and a few things added, like standing eight-counts), FNR3 could’ve been Muhammad Ali. As is, it’s still a champ — but more the Buster Douglas variety. But it is pretty . . . so pretty.