A Pitch reporter volunteers for the McCain campaign 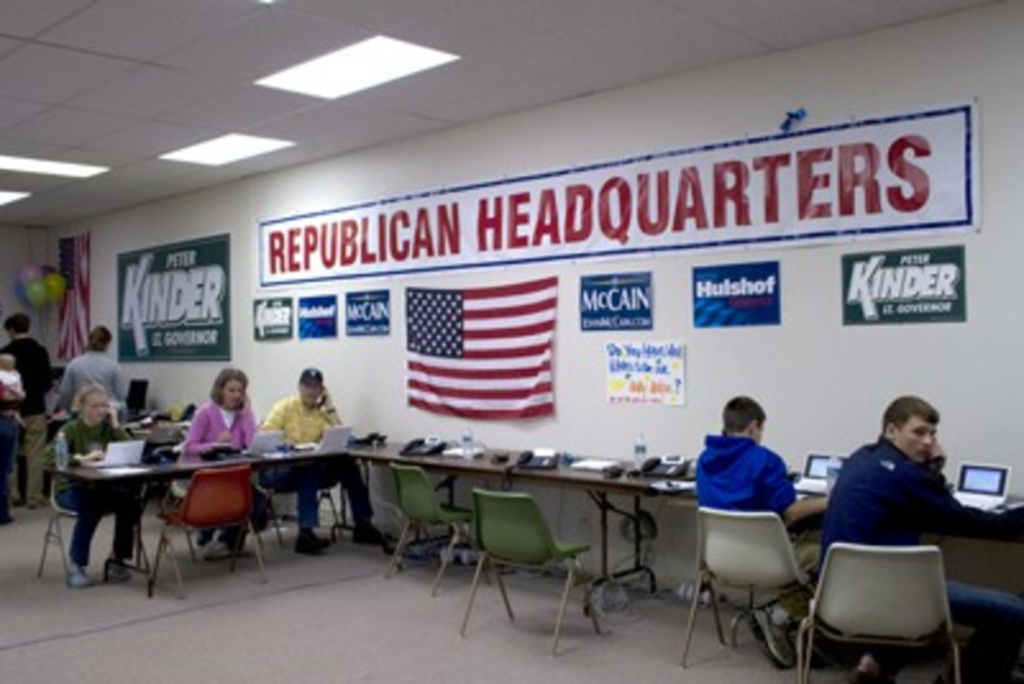 The first McCain volunteer I met was Mary, 74, a Republican precinct captain from Blue Springs. When I walked into the campaign headquarters at 3600 Noland Road in Independence, she said she was surprised to see me because I was young, and young people go for Obama.

“I don’t always agree with people my age,” I told her.

It was early afternoon on a Monday in late September, and we were the only two people at the phone bank. Damaged tables of prefabricated wood stood end to end around the drab office space. On the tables were phones and miniature white laptops.

A week earlier, I’d seen a flier calling for McCain volunteers. When I arrived at the headquarters, the local campaign chair, an affable, bearded man named Brian, showed me how the call system worked. Other than getting my name, phone number and address, he asked few questions.

I soon learned that no one liked working the phones. The computer gave us a list of registered voters. Our job was to call and ask people whom they were voting for and to verify their address, but not try to convince them of anything.

“I always thought of Blue Springs as pretty upscale,” Mary said, making conversation. “But some of the people that came in for the primaries, I’d look at them and think, Are you really from here? Are you sure you live here? I guess they did, but they sure didn’t look like it.”

Were they for John McCain or Barack Obama?

“Obama. There were a lot of African-Americans.”

That day, the computer was giving us rural numbers and a few in the suburbs of St. Louis. Out of every 10 calls, maybe three people answered. Most politely answered my questions. Occasionally, I’d get a lecture.

“I don’t think I need to tell you who I’m voting for. Who are you voting for?” one man asked.

“Straight Republican ticket for me, sir.”

“Hmm, well, I taught government for 30 years. Seems like voting a straight ticket is a good way to get into trouble, don’t you think? I myself try to educate and inform myself and others on the issues. As a government teacher, you realize how few people pay attention, and it’s very sad.”

“You need to educate yourself!” He hung up.

Sometimes there would be calls from people who wanted me to talk to McCain about a law that needed changing. They were certain I could reach him.

At the end of my first day, a friend of Mary’s joined us. Her name was Carolyn.

“Have you seen this?” she asked. In her hand was a printed e-mail. “It’s about Obama being with the Muslims.”

The papers listed passages supposedly taken from Obama’s book, Dreams From My Father. There was a stack of the printouts in the office.

I found a solace in nursing a pervasive sense of grievance and animosity against my mother’s race, read one of the quotes. I will stand with the Muslims should the political winds shift in an ugly direction…. This sort of thing went on for three pages.

(Later I checked the excerpts. Some were total fabrications; others were quoted out of context to appear more radical.)

Mary gasped. “You know, I hate to say anyone’s a Muslim no matter what party they’re in, especially without proof. But, him, I just don’t know … “

The next time I went to the office, the windows had been smashed out with a rock half the size of a football.

McCain was in town that morning for a campaign appearance with 200 invited guests. The women at the campaign headquarters hadn’t been invited.

Over the next hour, I realized that most of the volunteers came in with specific ideas about what was and was not a waste of their time, and most had decided that they could best help the Republicans by lounging in the office and drinking diet soda.

“I’m a little worried. The week that woman’s had,” one volunteer said of Sarah Palin. The vice-presidential debate was that night. “If they asked Katie Couric any of those questions, she wouldn’t know. Nobody knows that stuff.”

The window-repair truck arrived — with an Obama sticker on its bumper. The women were certain that this was evidence of a conspiracy. One woman, in a white blouse (with an elephant on the front over her heart and a bald eagle on the back, both outlined in glitter), wanted to take a picture of the truck. The other volunteers stopped her, afraid of starting any trouble. This led to a debate about the cultlike reverence of Obama’s supporters for Obama.

“I’ll vote for him, and the world will be just a paradise, and all my problems will be solved,” one mocked.

“Sure,” Glitter Blouse said. “If you want to vote for an Arab Muslim.”

That night, I went to a debate-watch party in the basement of a Pentecostal church on Red Bridge Road. A few retirees stood around a snack table, talking about the economy crashing while sitcoms played without sound on a 50-inch flat-screen TV. Round tables were set up from front to back, and at each were copies of that month’s Metro Voice, a Christian newspaper delivered mostly to churches. The cover story was about Sarah Palin as the new face of conservatism, and beneath that was a smaller article on McCain’s faith.

A volunteer from Independence told me that the office organizers had warned everyone to be careful whom they spoke to, now that people were throwing rocks at them. “They wanted us to make sure we watched what we said, especially if someone from the media came,” she told me. “They know a lot of people [Republicans] aren’t happy with McCain, but we don’t want to give that impression.”

Joanne, the woman who had signed me in, found me flipping through the Metro Voice. “There’s a woman at that table who’s new, too,” she said. “I thought you might like to meet each other. Come sit with us.”

Joanne’s table was in the front of the room. There sat a woman in her 50s, wearing a dark suit and a black cross. Her name tag read Linda. She said she was a retired teacher and now a seminary student.

Jeff Grisamore, the state representative from Lee’s Summit, Missouri, was there to warm up the crowd. After his stump speech — schools, family values and so on — he sat at our table, next to Linda.

There was no point in trying to watch a debate here. Joe Biden’s answers were drowned out by boos, people shouting “not true!” or “drill, baby, drill!” The Alaska governor could barely finish the first sentence of each answer before the crowd would cackle at a zinger or howl in agreement, and the rest of her answer was lost.

When the noise did break, Linda would lean to people sitting nearby and enlighten them with her views. The financial crisis was caused by loans forced on bankers as a method of economic affirmative action. Openly gay people violate her constitutional right to privacy. The September 11 attacks were God’s will. Nuclear holocaust could be part of the divine plan, and you don’t fight the divine plan.

“I was in a chat room yesterday explaining how I’d just learned the definition of the word holocaust,” she told me. “It’s a burning sacrifice to God, where none of the rabbis get the meat; it just goes straight to Him. That’s what they call everything that happened during World War II, a holocaust.”

She kept her eyes on mine, tucked in her chin and raised her eyebrows. She lifted her hands, palms up. “Burnt offering.”

My last day in the office, the staff had finally found some young guys to work the phones. They looked like college freshmen and sophomores. The boy next to me wore braces. He marked each call in a notebook and made sure we knew when someone refused the survey.

“Yeah, great. We should hang out!” he would yell, holding the receiver above his head before slamming it into the cradle.

Today we were finally calling people in the metro, specifically Lee’s Summit and Independence. It seemed the e-mail about Obama being a Muslim had been getting around.

“I think Obama’s an al-Qaida plant,” said the Independence woman who answered my last call. “I got this list of quotes one of my friends gave me. He scares me!”

I went to Brian and asked if we could talk. I explained the call and how the quotes had been stacked in the office on my first day.

“I looked it up because I wondered what else was out there about Obama that people didn’t know. And none of it was true,” I said. “Why do we have to lie? We’re Republicans! We’ve got the truth on our side! This is Democrat shit.”

Brian gestured for me to sit at his desk.

“I’m glad you brought this to me,” he said. “That’s not appropriate. If you see anything like that in the office again, let me know. I’ll tear it up. People bring things in sometimes and drop them off, and we can’t control it, so just keep an eye out.”

“Thanks,” I said. “I just don’t get some of these people. It’s like, even if Obama was one, I don’t see anything wrong with just being a Muslim. This woman on the phone was going on about al-Qaida plants. I wasn’t going to correct her … “

“Just a couple of days ago I had some guy tell me,” Brian lowered his voice, “he wasn’t going to vote for a half-breed Muslim. There are some crazy people out there, but you can’t convince them otherwise.”