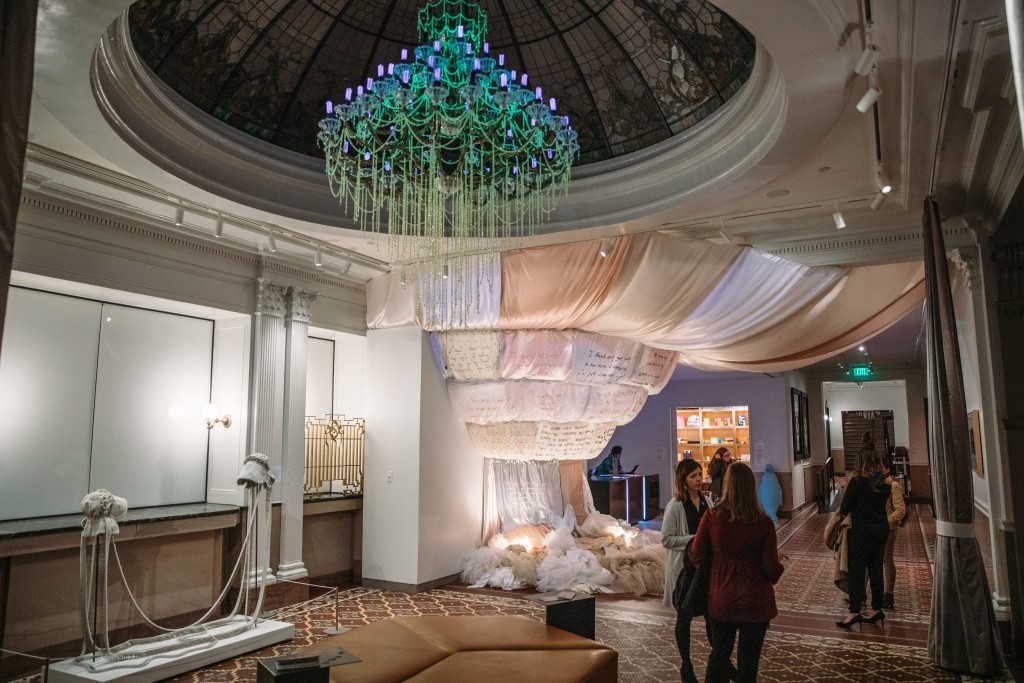 Inside the lobby of 21c Hotel. // Photo by Chase Castor

Since 21c Museum Hotel opened in Kansas City in 2018, many have wondered: just what in the world is this place? A doorman opens the door for you, and you walk up a corridor lit only by bars of red and blue LEDs—a permanent art installation by Luftwerk—into a lobby with century-old tile work and 21st-century artworks.

The entrance corridor immediately informs hotel guests that they are not in for a conventional hotel experience. It perhaps also reassures museum guests: yes, this is the place. Contemporary art is certainly more fun than what is usually found in hotel lobbies. Glowing LEDs and colorful plastic penguins win over taupe wallpaper and fake plants any day. But for new visitors, it might be a disorienting experience—what rules do you follow here? Merging hotel and museum means remaking the social conventions for each. How loud can I be? Where can I drink? Am I supposed to be here at all?

For one, this museum is open to the public 24 hours a day, 365 days a year, for free. You need not be constricted by a conventional institution’s hours: need a hit of contemporary art before work? After bars close? They’ve got you covered. 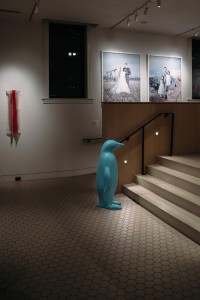 21c Kansas City’s sky blue penguin can be purchased through the museum’s website for $5,000. // Photo by Chase Castor.

21c is a chain—or as they call it, a multi-venue museum. Steve Wilson and Laura Lee Brown, heiress to the Brown-Forman whiskey fortune, opened the first one in Louisville in 2006. The couple are avid art collectors, predominantly focused on work made in the 21st century, hence the name 21c. They set out to open a museum—something only people with heiress kind of money and connections can really aspire to do—when they were presented with the idea of combining it with a hotel and restaurant to simultaneously supporting Louisville’s tourism industry. 21c was born and has since expanded to eight locations, with three more in the works, predominantly in middle-tier cities that are pumping money back into their downtowns.

There’s one permanent art installation that’s shared across all locations: life-size penguins made from recycled plastic in a special color designated for each location. Kansas City’s are sky blue. The penguins are made by artist collective Cracking Art, intended to draw awareness to environmental crises, but here they’ve become a quirky, playful mascot for the brand.

“People love them,” says museum manager, Jori Cheville. “They can touch them! Gotta give them one thing they can touch. Guests request them at their dining table. They can take them up to their room. They take on a life of their own.” If you really love them, you can have one of your own at home—they’re for sale on the museum’s website for $5,000.

21c bought the historic Savoy Hotel and Grill in 2016 and did extensive remodeling before opening in July 2018. The Savoy Hotel originally opened in 1888 and was the longest continually operating hotel west of the Mississippi until its 2016 closure. As the building has historic landmark status, much of the building’s original features are preserved: including colorful tile in the lobby and an art glass dome. Reupholstered chairs from the hotel’s old barbershop can be spotted around the hotel. Walking the guest room halls, you’ll see the old sealed off wooden doors, keeping that historical footprint though the rooms have been expanded. The hallways are also remarkably wide for a hotel: it was built in an era where guests arrived wearing hoop skirts and hauling steamer trunks. 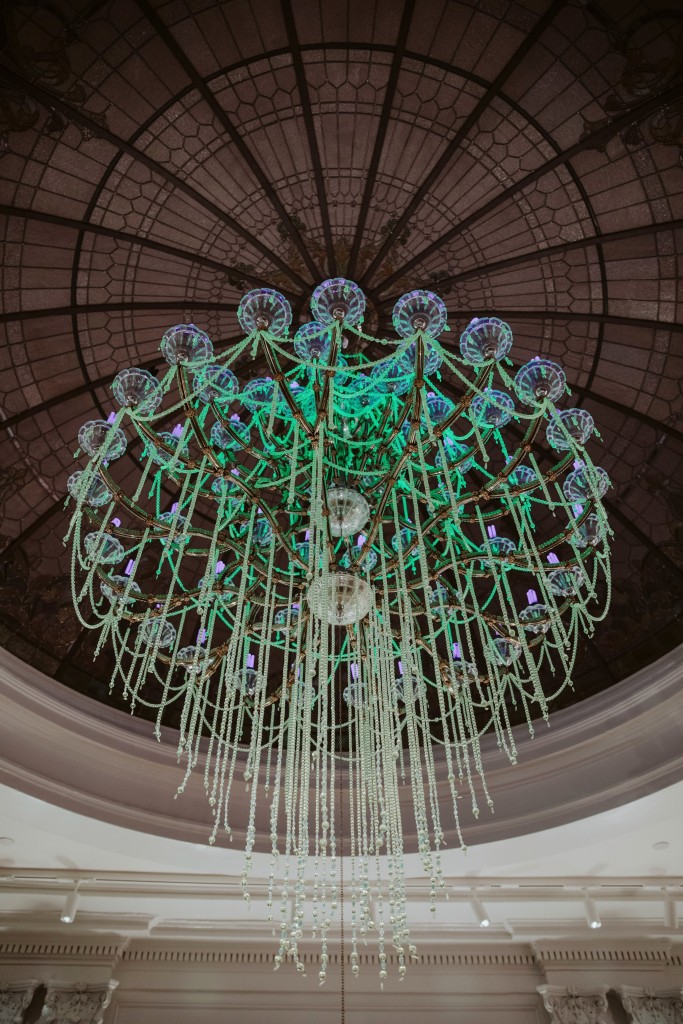 The chandelier entitled: Crystal Palace: The Great Exhibition of the Works of Industry of all Nuclear Nations (U.S.A.) is a piece by Ken and Julia Yonetani and is composed of uranium glass. // Photo by Chase Castor.

All this tangible history finds a potent contrast in the 21st-century art that fills the building. The art glass dome in the lobby, installed in 1903, now has a bright neon colored chandelier hanging from it, by artists Ken and Julia Yonetani. They made 31 chandeliers to represent the 31 countries with nuclear power, the chandelier’s size representing each’s capacity. This is the largest in the series, representing, of course, the United States. The chandelier is lit with the soft blue glow of uranium glass.

Jori Cheville says they get some travelers who are unaware that the place they’ve booked accommodations is not a conventional hotel. They are pleasantly surprised to find that they’re spending the night in a museum. “People who wouldn’t normally find themselves in a contemporary art museum,” says Cheville, “are now immersed in one.”

To ensure travelers get a taste of local artists, each location has an exhibition series entitled Elevate, featuring local artists in the elevator lobbies on guest floors. Through mid-February, Jillian Youngbird’s works are currently on view in this series. While Cheville often features multiple local artists, Youngbird has such a substantial amount of work in a variety of mediums, that she’s been the solo artist for Elevate for the last year. 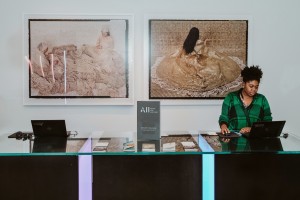 Check in at the front desk at 21c Hotel Museum. // Photo by Chase Castor

“While I know in the back of my head it is a hotel,” says Youngbird, “when I walk in, I still get museum vibes. There has been incredible museum-quality work there in every exhibition that I have seen and it’s humbling to have my work in the same vicinity.”

The space for the main exhibition is dispersed throughout the first and second floors of the building, in six separate galleries, as well as hallways. Unless taking a docent tour, it is unlikely most visitors would endeavor to find every artwork on display. There’s still a sense of trespassing, of am-I-supposed-to-be-in-here? when you wander up to the second-floor conference rooms. They call these rooms galleries, but really, they’re meeting rooms that just have better art on the walls than most.

The current exhibition, Off-Spring: New Generations, is curated around the themes of family and ritual. The hundred or so works in the show encompass almost any medium you can think of: sculpture, fibers, video, photography, paintings. Each location’s main exhibition is a rotating, traveling show that stays in each for 10-12 months. All the exhibitions are curated from Wilson and Brown’s extensive private collection. With eight locations open, they may have around 800 works on view at any given time. They reported collecting 264 new works in 2019, by which they were mostly, if not entirely, supporting living artists.

While there is an air of public service when private art collectors endeavor to share the art they own with the public, it also feels self-serving for philanthropists to expect ovations for sharing what they have too much of (that is, wealth).

Marrying the social mission of an art museum with the business venture of a hotel is a very twenty-first century late-capitalism move. It caters to a fast-paced lifestyle that means you can’t spare the time to go to a museum that’s any farther than the lobby of your hotel. What’s more, it’s an example of the way we’ve accepted the privatization of everything, including cultural spaces and artifacts. 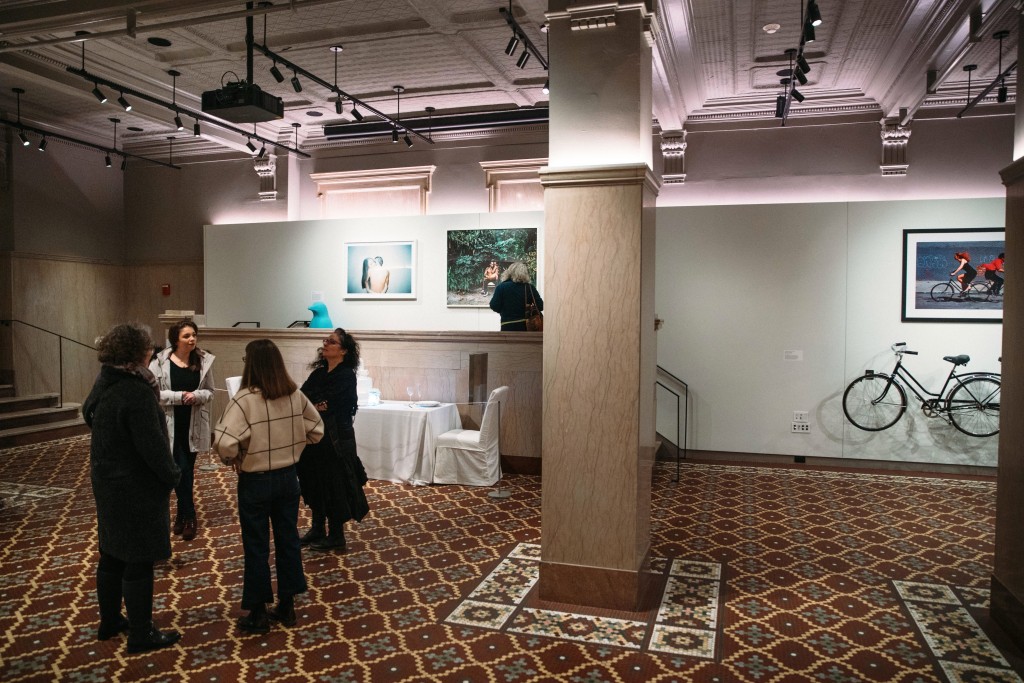 21c might feel new and exciting in its format, but ultimately it remains a business venture and still has the entrenched gatekeeping of the modern art world.

While much contemporary art grapples with issues of the uneven and unjust power structures in our society, these works are now held within places that replicate that status quo.

For those who do make it inside to see it, there are artworks that speak potently on the powers that be.

The Savoy Grill retained its antique wood bar and booths, original stained glass and light fixtures, as well as its original murals painted by Edward Holslag in 1903. “These murals are depicting expansion, settlers traveling west,” Cheville says, “and that has a negative history attached to it.” The museum’s chief curator, Alice Gray Stites, commissioned Brad Kahlhamer, a Native American artist, to create a response piece. Now hanging in front of one of the murals, dominating the space visually, are seven dreamcatchers made of wire and bells, entitled Super Catcher, Vast Array.  “He’s healing the space for us, in a way,” says Cheville, “Dreamcatchers are meant to filter out negative energy or spirits.”

The delicacy of the wires and the simplicity of the metal adornment serve to enhance the spiritual effect of the installation. In a room that was originally a smoke-filled club for white men out to fulfill their manifest destiny, some spiritual cleansing is definitely necessary.