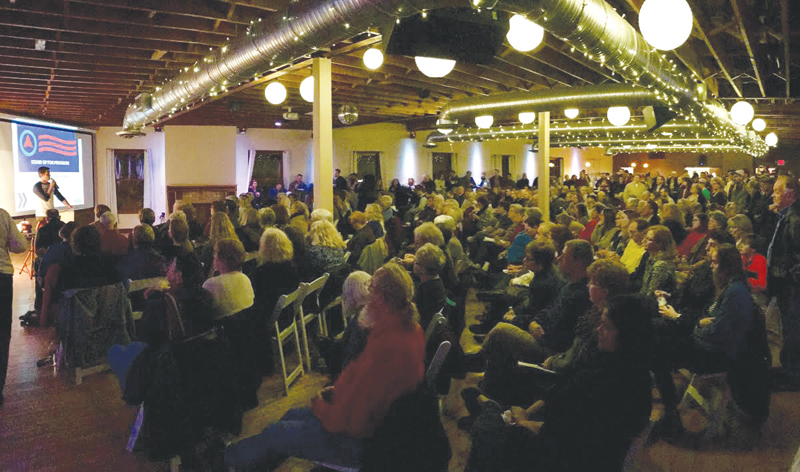 Green, 35, is the oldest grandson of the late Hillard Selck, a former chairman of the Missouri Republican Party and a Republican National Committeeman for many years. Selck — who, like Green, was born in Boonville, Missouri — was one of the so-called “Dirty Dozen,” a group of Republicans who led the Reagan Revolution in Missouri in the late 1970s and 1980s.

“Backing Reagan over [then-President Gerald] Ford was pretty controversial back in 1976,” Green says. “But that is the kind of guy he was — sort of a maverick, folksy, usually had a good quote for the newspapers. But he was a very principled man who fought hard for ideas that he believed in, even when they weren’t popular. I learned a lot about community involvement from him. He was involved at the national level, but his heart was in Boonville and local politics.”

As a result, Green’s childhood in Boonville — he lived just a block away from Selck — was spent knocking on doors for Cooper County conservatives and U.S. Senate candidates such as Kit Bond. The summer before his freshman year at the University of Missouri, he traveled to the 2000 Republican National Convention, in Philadelphia, where he worked as a page.

But the presidential administration that emerged from that convention challenged Green’s political views. “The [George W.] Bush years were rough: the Iraq War, the lack of focus on climate change,” Green says. “But I was also just maturing into my own personal beliefs about the world and about various social issues. The older I got, the less connected I felt to it [the Republican party].”

Around 2004, Green began thinking of himself as an independent. Then Barack Obama came along, in 2008, and articulated an ideology of hopeful political pragmatism. Green identified, and the belligerence and obstructionism exhibited by Republicans in the years that followed hardened his sense that the GOP was no longer capable of representing his beliefs.

It was time to face the music: He was a progressive.

In 2016, Green and his wife, Melissa, sold their house in Kansas City, Missouri, and moved to Parkville. Their daughter was 2, and they had a son on the way. Parkville meant better schools, a little more space, a breezier commute to and from Green’s West Bottoms law office, in the Livestock Exchange Building. They like it up there.

As a lot of young parents did, Green woke up November 9 with new concerns about the world in which his kids might grow up. He had been alarmed by the hateful and divisive rhetoric at the center of the presidential contest. Now Trump would be in the White House — and Green began to worry about what that meant closer to home. Missouri Republicans, whose most conservative legislation efforts the past decade didn’t make it onto the books, now enjoy a “trifecta” — control of the governorship and supermajorities in both legislative bodies.

“Charter schools,” Green says, identifying one such conservative hobby horse. “That’s an issue that directly affects those of us in the Northland who plan to send our kids to public school. This ongoing effort to expand charter schools in the state will work to the detriment of public funding of our school districts. That’s an issue that I believe people here would care about if they were informed about it.”

Fired up, Green turned up at the next meeting of the Platte County Democratic Central Committee. Despite Platte County’s close proximity to Kansas City, which reliably votes blue, it has no Democratic representatives in the state Legislature, and Republicans hold every elected position at the county level. Green expected he might meet others who had felt themselves shocked into action after such a cataclysmic whipping by Republicans. But the meeting was business as usual. A marquee item on the agenda was whether to extend the lease on a shed where the group’s parade float is stored.

“Our committee meetings tend to be pretty boring,” allows David Christian, chairman of the Platte Dems. “They’re not the best vehicle for activism.”

“I felt like it might be easier to make a difference by building something from the ground up,” Green says, “rather than trying to reform or drastically change an organization that already exists.”

But he did meet Martin Rucker II at the meeting. Like Green, Rucker has some Missouri politics in his blood. His father, also named Martin Rucker, was a Democratic state representative for parts of St. Joseph and Buchanan County from 2005 to 2010. The senior Rucker also served on the Missouri Board of Probation and Parole and is now the president of the St. Joseph School District Board of Education.

Rucker, 31, is a former first-team All-American tight end for the University of Missouri. He was drafted by the Cleveland Browns in 2008 and bounced around the league for five years — the Eagles, the Cowboys, the Jaguars and, finally, the Chiefs — before announcing his retirement in 2014.

Last year, Rucker challenged incumbent Kevin Corlew for the 14th District seat in the Missouri House of Representatives. The district includes parts of Riverside, Gladstone, Parkville and Kansas City. Rucker lost, but the race was relatively close (53 to 47), and he’s young. It’s unlikely to be his last run for office.

Green and Rucker got together a week after the meeting and discussed Rucker’s race and the state of the politics in the Northland. Green was interested in finding ways to reach younger, possibly independent-identifying voters in the Northland — people not so different from Green who, for whatever reason, might feel disconnected from Democrats or from the political process in general.

“My main observations from my campaign were that, one, the majority of the people whose doors I knocked on were not very informed on state and local issues, and, two, they tended not to care about the issues until it was communicated to them how those issues could actually affect their lives,” Rucker says. “So Blake and I really agreed right off the bat that it would be very useful to create some kind of organization that could show people in the Northland how these policies being drawn up in Jeff City are affecting them.”

That organization now exists. It’s a 501(c)(4) called Northland Progress, and in early February it held its first event, “Stand Up For Progress: The Road Ahead & How to Help,” at the Screenland Armour’s upstairs event space. Green, the president and board chair of Northland Progress, expected a turnout of around 100 people.

More than 300 people came. Green, Rucker (the group’s vice president) and a dozen or so other volunteers — identifiable by baseball T-shirts bearing the Obama-like logo of Northland Progress — circled the room, greeting guests, gathering information for email lists, pouring Boulevard Kolsch from behind a bar in the back. Throughout the room, gray-haired concerned citizens mingled with 20-somethings and young pregnant women.

The crowd — considerably more age-diverse than those who regularly attend community meetings might expect — reflects the Northland’s changing dynamics. Platte County is the fastest-growing county in the state, and state estimates predict that Clay County’s population is on track to grow by more than 115,000 people between 2000 and 2030. The new arrivals are families, not farmers. They offer an opportunity for Democrats, if they can be mobilized, says Teresa Loar, who represents the Northland on the Kansas City, Missouri, City Council.

“I think the Republican Party these days — the word I use to describe it is mean,” says Loar, who was a Republican herself until the 1990s. “They have come to represent this hateful, isolated, mean worldview. And I think as the Northland expands, the younger families that are coming in don’t want to hear that message.”

Loar continues: “What you’re seeing with Northland Progress is that trend picking up and sort of materializing. And it’s exciting, because it’s brand-new people who are leading it. And I think that will only continue to grow.”

Green agrees. “This community is already in place up here,” he says. “Everything I see, everyone I talk to, leads me to believe that there are tons of people who have a vested interest in the future of the Northland who share my views and concerns. They just needed a way to find each other.”

As a 501(c)(4), Northland Progress can’t be overtly partisan, but the roster of speakers for the debut event in February reflected what one might call a suburban progressive agenda. Bill Griffith, of the local Sierra Club chapter, spoke about home solar installations. Shellie Daniel, with the Missouri Department of Transportation, and Pleasant Valley Mayor David Slater discussed how to combat the sorry state of roads in the Northland. Pat Dujakovich, a union leader, explained why right-to-work laws (since passed by the Legislature) were bad news for fair wages in the Northland. 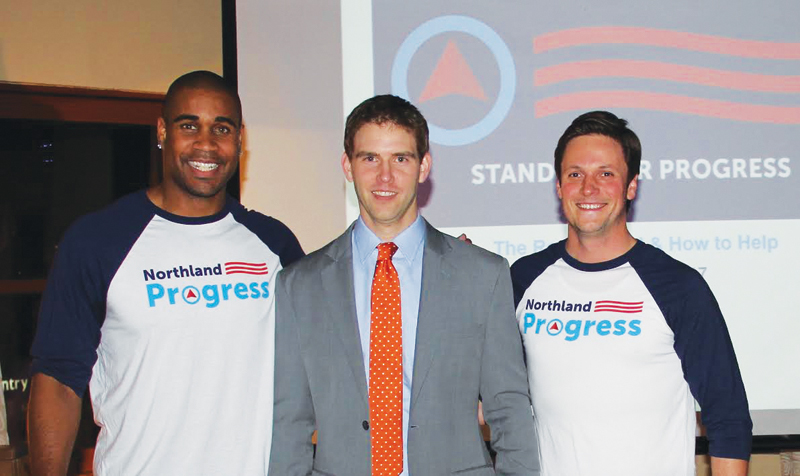 New Missouri Democratic Party chairman Stephen Webber closed out the night with a talk, during which he stressed the importance of events like these. He urged those present to consider running for office.

“If you’re waiting for somebody to come up and hand you a $20,000 check to run for the Legislature or run for school board, I can tell you from experience: Stop waiting,” Webber said. “It ain’t gonna happen. Get out, organize, and do it for yourself.”

The next step, Green says, is for Northland Progress to get moving on the issues it most urgently wants to address. Its first membership meeting — for which more than 100 people have RSVP’d — happens March 28, at Cinder Block Brewery’s event space. From there, the group will seek to engage with community leaders and, eventually, endorse candidates in local races — maybe even help field some of those candidates.

As for Green, he’ll soon pack up his office in the West Bottoms. He’s moving his law practice to downtown North Kansas City.

“I figure I gotta walk the walk,” he says.