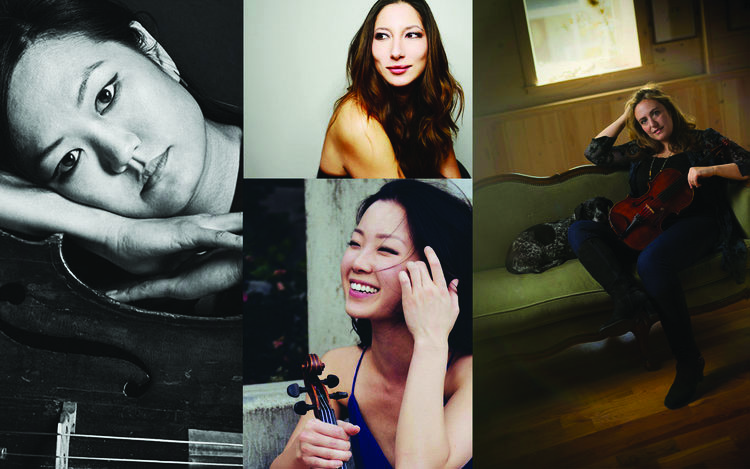 “Good Friends, Great Music” — it sounds like the slogan for a friendly dive bar, the type of joint where an enthusiastic, just-for-fun garage band might play its first gig. In this case, it’s the theme of an upcoming show at the 1900 Building, an elegant arts venue where you’re unlikely to be served a yard beer or hear Nuggets-era covers. The enthusiastic, just-for-fun part, though? That you can find at “Good Friends, Great Music.”

It is indeed friendship that stimulated this upcoming piano quartet concert, which features violist (and former principal with the Kansas City Symphony) Christine Grossman and cellist (assistant principal with the KCS) Susie Yang joined by violinist Helen Kim and pianist Tanya Gabrelian.

The roots of the concert started last summer, after an impromptu sight reading session at the Missouri River Festival of the Arts, a three-day festival in Boonville, Missouri. Yang and Grossman have played in the festival for about 6 or 7 years, and it tends to bring in players from the Kansas City and St. Louis areas. Kim is currently associate principal second violin with the San Francisco Symphony, but was with the St. Louis Symphony prior to that, and attended the Boonville festival for many years. At last year’s fest, the three performers met and gelled with Gabrelian, who teaches at Boston University.

“It was instantly fun,” Grossman says. “We just read piano quartets and it was simpatico. We realized that the combination of us four was a really good one.”

Grossman and Yang have been friends and colleagues for nearly 20 years. They met in 2001 at a summer festival in Germany, then both attended the Juilliard School in New York, and later found themselves together at the New World Symphony, then San Diego, and now back here in the orchestra. At this point, they’ve played together for hundreds of performances there in the front row of the ensemble in Helzberg Hall.

“As we moved through life, we sort of had parallel steps,” Grossman says.

Despite living in different parts of the country, the Boonville foursome has been eager to get together again. Finding compatible chamber music partners can be as challenging as dating, and they don’t want to waste a good match. “Good Friends, Great Music” will be a shorter concert — about an hour — but they’re not stinting on quality; it’ll feature Robert Schumann’s Piano Quartet and Wolfgang Amadeus Mozar’s Piano Quartet No.1.

The Mozart piece — a favorite of many chamber fans — is the one that started their friendship. “That was the piece we read last summer,” Grossman says. “It just came together so well and highlighted our synergy.”

But Grossman says she’s most excited for the Schumann.

“It’s truly one of my desert island pieces,” she says. “I have a visceral reaction. [The third movement] has one of those melodies that’s so simple and beautiful and so heartfelt, it feels like it’s always been — that Schumann just kind pulled it out of the ether. It goes seamlessly into the finale movement, which is also a very cool movement. The last movement has a fugue in it. I’m a sucker for fugues, so selfishly I’m really looking forward to the Schumann.”

The plan is to perform the Schumann and another piece in Boonville, then travel back to Kansas City for a weekend of rehearsal and relaxing social time — something the pace of the festival can’t really accommodate. They’ve also booked a house concert with Charlotte House Series, an intimate new-ish venue in Brookside that will offer another excuse to share their enthusiasm with the Kansas City crowd. Here especially, they’re not overthinking it: “It’s fun to just make music with your friends,” Grossman says.