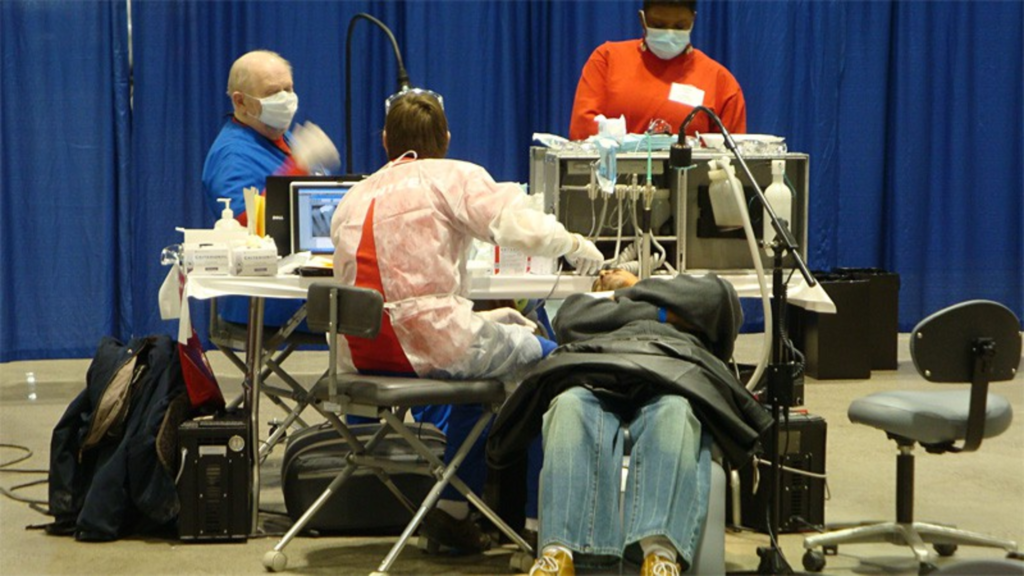 And so a year that began hopefully ends bitterly.

The heartless cold freezing the city on December 9 and 10 turns out to be a metaphor for the year’s biggest argument and those left out of it. In Washington, D.C., on these same two days, a hundred cowardly senators are “debating” how little they can do to solve the problem of 47 million Americans who don’t have health insurance — who don’t have access to the kind of preventive medicine that keeps them from getting sick in the first place, who can’t just go to the doctor when they get the flu or a sinus infection, who don’t have any way to pay for a trip to the emergency room if they need stitches or break an arm or crack their head open in a life-altering accident.

Most Americans know that this is the most pressing issue in a generation and want the government to help. Polls consistently show strong support for some form of publicly provided health care. Yet leaders have let this year’s national discussion languish in the gutter of absurd town-hall meetings, Republican scare-tactic talking points about a “government takeover,” and gutless Senate Democrats bartering citizens’ lives for 60 votes.

Familiar delusional rhetoric: “We have the best health care in the world!”

Anyone who has actually said that in the last year is probably not at Bartle Hall Thursday afternoon, December 10.

The weather hasn’t kept away a couple of thousand people who need help. It has just made it harder for some to get here.

They’re not homeless or even poor necessarily. Most of them have jobs. It’s just that the jobs don’t come with insurance — or insurance with an affordable premium.

They wouldn’t even be here now, except that a couple of TV stars got interested and raised some money so that, on these two days, a national organization could put on the fourth in a series of giant free health clinics.

In September, Mehmet Oz, who established himself as “America’s doctor” on Oprah Winfrey’s show before spinning off his own The Dr. Oz Show, bankrolled a massive event with the National Association of Free Clinics in Houston. After that, Oz ended up on The Late Show with David Letterman and Larry King Live. Then, on October 7, MSNBC’s Keith Olbermann spent his hourlong Countdown furious about the politics of the health-care debate, ending with a plea for viewers to give money to the NAFC.

The Houston event drew 1,700 patients. More than a thousand people showed up for the second clinic, in New Orleans November 14. Another thousand sought care in Little Rock, Arkansas, November 21.

“We’ve seen people who had not gotten care in five to 10 years get care, and hopefully they will be healthier as a result of that,” Wood told The Pitch a few days before the Kansas City event. “Some of the people we saw had pretty extensive problems. In Little Rock, in one hour, we sent five people to an emergency room.”

People sent to an ER from a one-off clinic are just getting put into a broken system. Hospital workers might help them apply for Medicaid or work out a payment plan. “But at least they got the care they needed,” Wood said.

Wood and her colleagues aren’t waiting around for reform. “Hopefully our system will change,” she said. “But right now with everything in Washington, even if it happens, it’s years away. And people need care now.”

On the first day of Kansas City’s clinic, organizers estimate that 900 people came. Now it’s nearing the end of the second day.

At the top of the escalators that rise to Bartle Hall’s enormous main hall, a few hundred people are waiting in rows of temporary chairs. Thirty yards away, harsh lights and TV cameras are set up on a raised platform, where MSNBC’s Ed Schultz is broadcasting The Ed Show live.

Despite the activity, it’s weirdly quiet. The cavernous room seems to swallow every sound but the voice that calls numbers through the PA system every few minutes: “1920, 1921.”

The numbers are exactly what they sound like: the 1,920th and 1,921st persons getting called to see a doctor.

The efficiency on display is impressive. The logistics are staggering. Of the 2,206 volunteers, about 111 are doctors and other professional medical providers (organizers are counting nurses separately). Rows of blue-fabric booths are separated into different areas for various medical specialties. A mobile women’s health clinic — an RV — is parked in the middle of the floor. Against one wall is a bank of computers where volunteers are entering patient information. One section is set up with machines for eye exams. Behind the TV platform, long tables are stocked with every imaginable medical supply. The south end of the hall is the dental clinic, which a volunteer says has “blown up” during these two days. It has its own waiting area and several stations. The work going on here is the same as in any regular dentist’s office — except that it’s all out in the open.

In other areas, the blue curtains provide enough — but not total — privacy. Without trying to eavesdrop, anyone walking around the floor can hear random bits of standard doctor’s-office conversation: “The last time it felt like this … ” or “… every two or three months ….”

Today’s outpouring of aid — from the Countdown viewers who donated money to pay for it to the volunteers who have made it happen — is a big story. Any senator with a shred of guts might call a press conference to note the obvious fact that Americans are willing to pay a little extra of their own money to make sure that other Americans receive health care. And those who rant mindlessly about “socialism,” well, they can shut up. This clinic seems like one pure and apolitical example of just such a system, and no one waiting in the rows of chairs at the top of the escalator seems to be complaining.

Everyone here is getting the best health care in the world. But the bigger story is that Bartle Hall looks like something in a Third World country. In the United States, average people aren’t supposed to be this desperate.

In the dental area, a volunteer walks with a woman who has just finished her treatment. The patient looks a little dazed, with white gauze sticking out from between her clenched jaws.

Elsewhere, behind one of the blue-canvas curtains, there’s a faint outline of a man sitting in a chair at a table, holding a clipboard. He’s talking to another man, who stands up and takes off his shirt.