A loud evening with Silent Disco 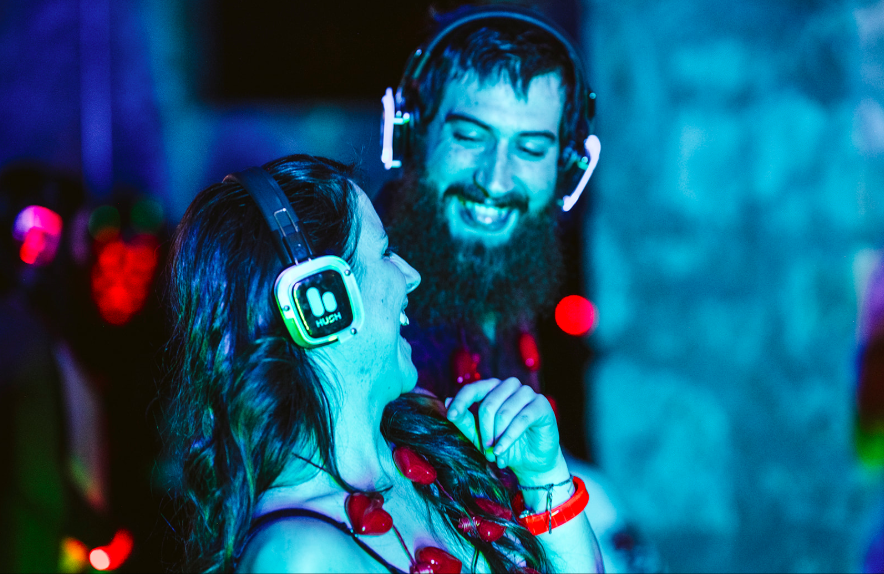 Glowing bracelets flicker as people wave their arms in the air. Behind the bar, even the servers mouth lyrics and bop their heads to an internal soundtrack. Couples and friends congregate on the strobe-lit floor, yet dance to different rhythms, the bulky headphones covering their ears gleaming either red, green, or blue.

“If you’re listening to blue right now, make some noise,” a sequin-suited DJ hoots over Mijos’ “Bad and Boujee.”

As the quiet room fills with sudden screams, event-goers press the button on the side of their headphones, filtering through Cyndi Lauper and Usher.

This was the scene Friday at Parlor in the Crossroads: an enthusiastic, crowded event benefiting the American Heart Association and emblematic of a larger silent disco movement.

I first stumbled upon a silent disco in 2018 at Boulevardia. By this, I mean that a few pairs of headphones sat on a table, and four people shimmied in a Stockyards parking lot. Since then, the concept has popped up everywhere from Crossroads Hotel and Union Station to the Kansas City Public Library.

Undoubtedly, Jordan Silver, morning DJ for 96.5 The Buzz, has helped drive this popularity. Silver has hosted several silent disco sets and introduced the term to her listeners.

“All you have to do is slip on those headphones once, and then you understand,” said Silver, who took part in a “DJ Battle” Friday with 99.7 The Point’s Brian ‘Ponch’ Hudgens. “I think it’s the future. It’s not about [being quiet], but it is actually about being able to control your own dance floor experience.”

Social media seems to have already taken her recommendation. The silent disco hashtag returns 348 thousand posts on Instagram, and delves into unexpected and specific subgenres, including #silentdiscowedding and #silentdiscomeditation.

Alongside this wide audience, people have praised the trend for its inclusiveness and accessibility. It gained pop-culture representation in the Netflix show “Atypical,” where the protagonist, who has autism spectrum disorder, parties at a silent prom. In 2015, a Georgia high school hosted a similar dance to accommodate a student’s Tourette’s syndrome.

“Silent discos are new, fun, and reach a younger audience than some of our other events,” said Lee.

To browse a list of silent disco events near you, search Hush Concerts and Quiet Events. To support the Kansas City American Heart Association later this month, consider attending or volunteering at the Feb. 29 Kansas City Heart Ball.