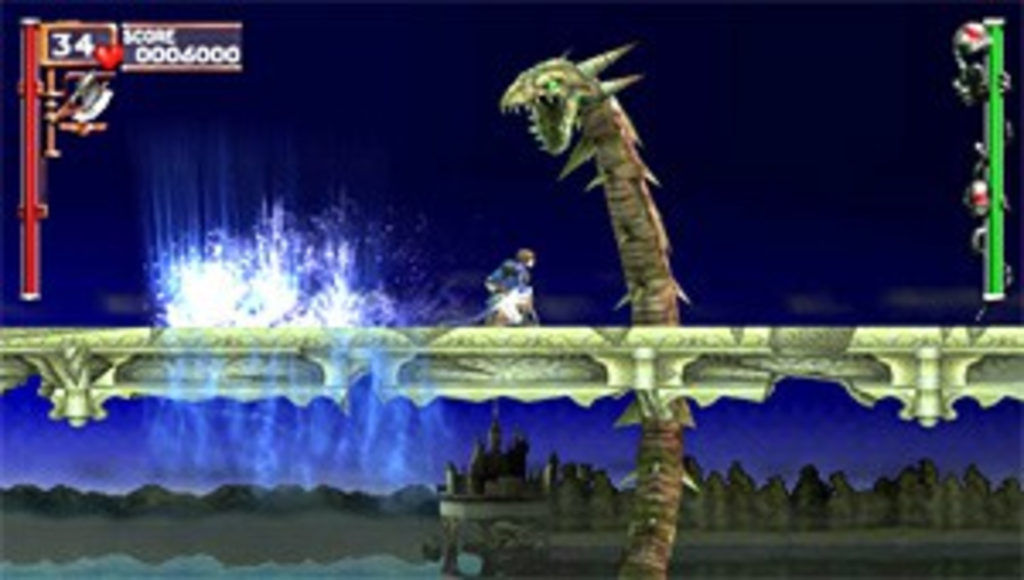 Castlevania, the vampire-hunting series that stretches over 20 years and as many games, has basically two kinds of fans. There are the traditionalists, who’ve followed the games since they were straight-up action titles with thumb-busting combat and infamously steep difficulty curves. Most agree that the best of the old-school Castlevanias is 1993’s Rondo of Blood, a scarce Japanese release that goes for a couple hundred bucks on eBay.

The second type of fan favors the more recent offerings, which eschew the series’ brutal roots for more accessible (and forgiving) exploration, dropping players in Dracula’s sprawling castle to hunt for secrets, treasures, and new weapons. Of these “discovery trail” Castlevanias, the first — 1997’s Symphony of the Night — is unsurpassed.

So fans of both camps were almost giddy when Konami announced plans to bring both titles — Rondo and Symphony — to the PSP in a single package, Castlevania: The Dracula X Chronicles, along with a full remake of Rondo. Like Seinfeld’s black-and-white cookie, the combo could have epitomized two very different types of gamers getting along in harmony, or some crap like that. But neither group will be completely satisfied with this package, thanks to two major flubs: the flawed emulation of the original games and the fact that you’re first forced to play the remade Rondo to access them.

That’s not to say the new Rondo’s no good. Despite a complete overhaul, it’s faithful to the original down to the smallest detail, from where extra lives are hidden to a little-known tap move that extends your attack range by a few crucial pixels.

This loyalty to the source extends to Rondo’s difficulty, which can be summed up as punishing. Old-school all the way, Rondo is a game that demands concentration, hand-eye coordination, and resolve. Even experienced gamers will be well acquainted with the “Continue or Quit” screen, which might as well read, “Thank You, Sir, May I Have Another?”

Therein lies part of the problem: Though the box advertises Symphony of the Night as part of the package, it doesn’t make clear that you have to play through the first few brutal levels of the Rondo remake and collect a tricky-to-get item before Symphony can be played. Rondo ’93 is similarly “hidden.”

Why are we forced to jump through these hoops? Imagine if Warner Home Video announced it was rereleasing Casablanca on DVD, but the black-and-white original wouldn’t play till you watched an hour of Ted Turner’s colorized version.

But the bigger problem is that Rondo ’93 and Symphony are flawed versions of the real deals. Rondo ’93’s fast action doesn’t fare well on the PSP’s sluggish LCD screen; your nimble enemies blur so badly, they’re almost transparent. Dark enemies on dark backgrounds are virtually invisible. Symphony features a redubbed voice track that jettisons the overacted, almost operatic camp of the original.

There’s certainly an audience for rereleased, remastered Castlevania classics. But there’s a right way and a wrong way to present such compilations. Sadly, there’s not much right with Dracula X.