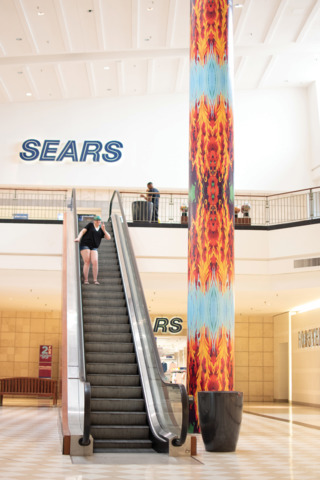 The pillars designed by Vonderschmidt (above) and Cisneros (photo below) are a permanent installation at the mall.
courtesy of Independence Center

Blank space abounds at Independence Center. It’s all white walls, white floors, white ceilings, and — until recently — white, 40-foot pillars that shoot up like towers from the floor to the tippy top of the shopping mall.

About a year ago, Cheryl Meyer, the marketing director at Independence Center, was thinking it’d be nice to add some color to the place.

“We were looking to get more involved with the community and bring other organizations into the center,” Meyer says, “but then we were also wanting to do this art project.”

She soon stumbled upon Sponsored Studio, a program at the Kansas City Art Institute that matches students with local businesses looking to solve creative problems. The businesses get artistic insight; the students gain hands-on experience in the often-tricky practice of making a living from one’s art. Meyer took a look at the projects Sponsored Studio has completed since its launch at KCAI five years ago — a mural at the Kansas City Zoo’s Stingray Bay exhibit, a chandelier comprised of 1,000 butterflies designed for the Plaza cocktail lounge Monarch Bar — and concluded that KCAI’s program would be a natural fit.

“We look for partnerships with both the business and nonprofit community to help them bring their creative projects to life when they don’t have the talent internally to do that,” explains Randy Williams, senior director of corporate programs at KCAI. “It gives our students an opportunity to work directly with a client possibly for the first time, but to do it in the safe environment of a classroom space.”

Each project generates revenue for KCAI. Fifty percent of the proceeds go to the school’s scholarship funds, while the other fifty percent covers costs of the project and provides a stipend for the students commissioned for the project.

Williams says the goal of Sponsored Studio — and Micro, an elective class open to students of all majors that functions as a sort of design agency within KCAI; most Sponsored Studio projects are facilitated through it — is to give students the confidence to pursue business opportunities independently.

That’s precisely what happened with Arlan Elgin, who graduated in May with a degree in illustration. During Elgin’s semester in Micro, the class tackled projects like play poster designs for the Coterie Theater and veterans portraits. The class also designed the storefronts and cityscape sets for UMB’s School of Economics, a field trip experience where elementary school aged-students learn the business and financial skills in a mock city-business setting.

Elgin’s designs were selected for two of the storefronts — an encouraging outcome as she prepares to pursue her craft after graduation. And because the nature of the project meant she had to constantly communicate with other designers to ensure the work was cohesive, she says she’s now more comfortable working with (and networking with) other artists.

“It helped a lot in terms of confidence — being able to approach a professional job and feel capable to give them what they want and deliver the end product,” Elgin says. “[Micro] was kind of invaluable for preparing me for the professional world.”

For the Independence Center project, Meyer invited Williams to the mall, and they landed on the idea that the students could design column wraps for the colossal pillars visible to shoppers as they walk across the east and west wings of the shopping center. Meyer then met with the students enrolled in the fall 2018 semester of Micro. She told the students what Independence Center was looking for, they asked some questions, and then the students set about designing some potential pillars. Each member of the class would present their design as they would to any other client they might encounter outside of the classroom in a professional setting. 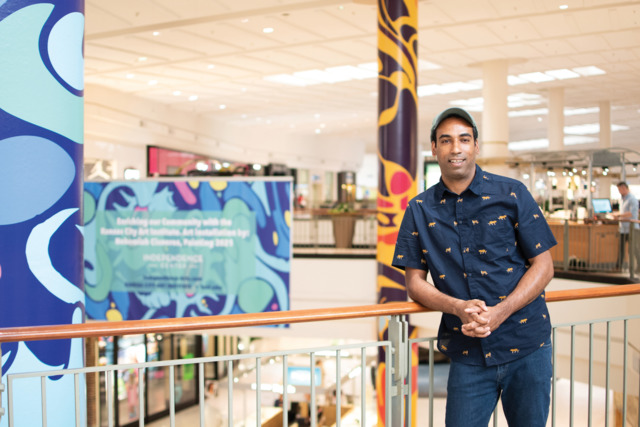 A few weeks later, Meyer returned to see what the students had come up with. KCAI junior Nehemiah Cisneros presented his design painted in black and white. When his design was chosen (along with recent KCAI graduate Lacey Vonderschmidt), he digitized the illustration and added color, ultimately presenting Meyer with several different color scheme choices. Those were then narrowed to the two designs that, as of May, wrap the pillars outside the mall’s interior Macy’s entrance. The colorful pillars are a permanent installation at the shopping mall, and Meyer says she hopes to pursue more creative projects at Independence Center in the future.

For Cisneros, a painting major who transferred to KCAI in the fall of 2018, it was a special way to connect with his new home.

“I was blessed to have the opportunity to actually make something happen in a city like Kansas City,” he says. “It was very humbling to have been here for under a year and have been able to give something to the community.”

“We’re just really excited about the way it came out,” she says. “It adds an experience more than just shopping. I like to watch as the shopper’s walk by and take it all in, looking up and wondering what’s going on.”