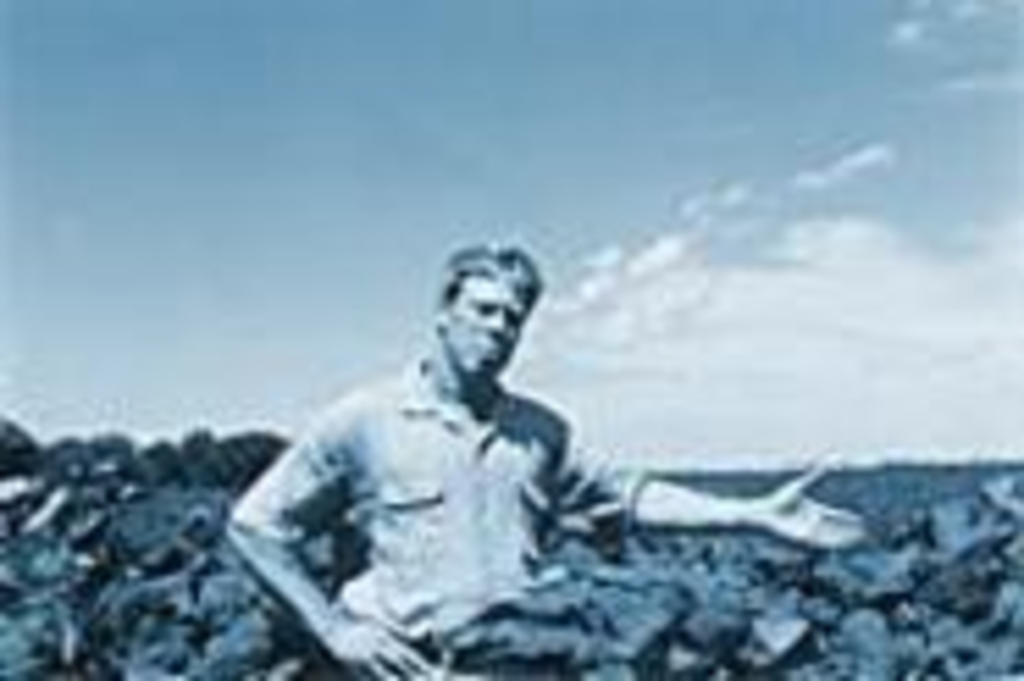 Bob Schumm tells Douglas County Republicans: It’s my party and I’ll file if I want to.
Most politicians smile for the photos in their campaign ads, but not Bob Schumm — at least not for the one he ran in the Lawrence Journal-World on June 26 and 27. In those ads he scowls at would-be voters, his left arm stretched out over a 96-acre plot of waist-high weeds. “Field of dreams?” the ad asks. “Last year this prime piece of farmland grew soybeans. Next year it will grow a warehouse, and we have subsidized this action with $4 million of our tax dollars, and all we are going to receive for our money are 235 low wage, dead-end jobs.”

“And here’s the reason why: This is a person who wants to represent the community, but he’s slapping the face of people not as well-off as he is. He calls those ‘dead-end jobs.’ Well, you know what? That’s insulting to those people who will be working out there.”

Such rhetoric between Democrats and Republicans isn’t surprising in political campaigns — but in this case, both men are running as Republicans. The ad is a bold first strike in what promises to be a contentious battle for the 3rd District seat on the Douglas County Commission. It focuses on an issue that has been ground zero for controversy regarding growth in Lawrence and Douglas County over the past few months: American Eagle Outfitters’ proposal to build a 400,000-square-foot distribution center on the east side of town.

Touted as a coup for Douglas County Development Inc., an economic development organization with ties to the Lawrence Chamber of Commerce, American Eagle’s landing was vilified by many Lawrence residents. Some people mourned the loss of prime farm soil, classified by the U.S. Geological Survey as among the best in the world, and feared the facility’s massive parking lot would disrupt drainage patterns for the neighboring farms. Others worried about traffic overburdening the two-lane county roads around the site. But most people were simply outraged at what they saw as a subversion of due process.

To make way for the project, both the city and county commissions had to approve an amendment to Horizon 2020, the city and county’s official long-term planning document, which had been finalized in 1998 after years of debate and public input. American Eagle opponents complained that the change to Horizon 2020 had been fast-tracked and that opportunities for public input were minimal; when there was an opportunity for that input, dozens of residents spoke against the project at public meetings. There were so many anti-American Eagle posts on the community bulletin board www.larryville.com that its creators had to set up a separate site. And even at the Web site of the Lawrence Journal-World — which many readers contend is a Republican, pro-growth paper — a poll revealed that 82 percent of those who responded were opposed to American Eagle’s tax abatement.

“I think American Eagle was a terribly expensive mistake on the part of the Chamber,” says Charles Jones, the lone Democrat on the Douglas County Commission.

And that’s one reason Jones has said that even as a Republican candidate, Bob Schumm, who twice served on the Lawrence City Commission, once as mayor, “would fit the bill.”

“We haven’t had anybody quite like Bob Schumm running for county commission,” says Carol Hood Henderson, who has been active with the Democratic Party in Douglas County for nearly 25 years.

But Henderson is also quick to point out that Douglas County politics aren’t easily categorized along party lines. “We have a lot of Republicans to the left of Democrats and a lot of Democrats to the right of Republicans,” she says. “People here have less loyalty to a party than to issues. We’re a very issue-oriented community.” And since growth is, by most accounts, the biggest issue in the county, the line of party politics is drawn between those for controlled growth and those who would allow growth to build the local economy. That division, Henderson says, is drawn around the Lawrence Chamber of Commerce.

“The parties here are the Chamber of Commerce and everybody else,” Jones says.

And Schumm has emerged as the anti-Chamber candidate, though he’s quick to deny the title. The owner of two downtown restaurants, Schumm was once a longtime member of the Chamber; he served on its board of directors twice. But he dropped out several years ago: “I just didn’t feel it had any value to my business. And I didn’t believe in some of the policies and politics of the organization.”

Schumm won’t elaborate. But Jones offers a theory. Whereas the Chamber was once an advocate for the locally owned businesses huddled along Massachusetts Street, Lawrence’s main drag, it has since become a champion of the development industry. This, Jones says, has alienated some downtown business owners. He believes that contingent helped him win his seat on the county commission nearly two years ago (his seat is not up for reelection).

Schumm concurs with Jones’ theory. “I think that’s probably a shared feeling,” Schumm says. And Gary Toebben, who was president of the Chamber from 1981 to 1999, does not dispute it. “In essence, what they’re saying is true,” he says. “Most of the members in the Chamber back in the ’60s were in the Massachusetts Street area. Now they’re spread all over. But to imply that there’s something sinister, that’s not appropriate.”

Yet sinister implications abound in the minds of those who consider themselves outside the Chamber party, particularly in light of the American Eagle situation. Jones, Henderson, and a slew of other proponents of controlled growth believe the Chamber is the driving force behind city and county commissions that have historically voted in favor of development. Toebben conceded that the Chamber takes an active role in promoting candidates. “The Chamber has really been involved, for a long time, in encouraging people to run for all kinds of positions — the city commission, the county commission, and the school board,” he says. “Never as an organization. Chamber members are involved in helping people come into office. I think businesspeople understand that the health of a local economy is the foundation for a community’s quality of life.”

In this election, McElhaney has emerged as the perceived Chamber candidate. Henderson says he is “the anointed one.”

McElhaney disputes that characterization. “I was never once approached by a Chamber executive,” he says. “Now, I can’t say I wasn’t approached by members of the board of directors, but that’s because I am friends with them.”

But McElhaney, who was a member of the planning commission when it unanimously approved the amendment to Horizon 2020, is clearly the pro-growth candidate. “It is good for a community to grow,” he tells PitchWeekly from his office at McElhaney Fence Builders, which he bought from his father, a former county commissioner, more than 20 years ago. “You’re talking to a person who started out of nothing to become very fortunate.” And that fortune spills over. “I provide income to employees who have bought homes, bought vehicles, bought groceries, and contributed to the tax base.”

Schumm, on the other hand, says, “The long-term challenge for the county commission is: How will the county commission manage the development and growth of the county to avoid the tragedy we have in Shawnee County and Topeka?” Kansas’ capital, he believes, has been decimated by sprawl. In the wake of American Eagle, he fears Lawrence is headed down the same path. To prevent that, he offers up his independence: “I don’t have any organization to answer to, no organization to lean on me in any way. I have no affiliation with any group.”

McElhaney downplays the idea that Schumm’s candidacy represents a crack in Douglas County’s Republican power structure. “There’s a lot more issues in this campaign other than American Eagle and the Chamber,” he says. “If people want to make those big issues, they don’t have too much on their minds.”

And Schumm, who has kicked the hornet’s nest, politely declined confirmation or denial of Jones’s crumbling-empire theory, saying only: “I guess on August 1 we’ll find out if I’m right.”