A different kind of yard work 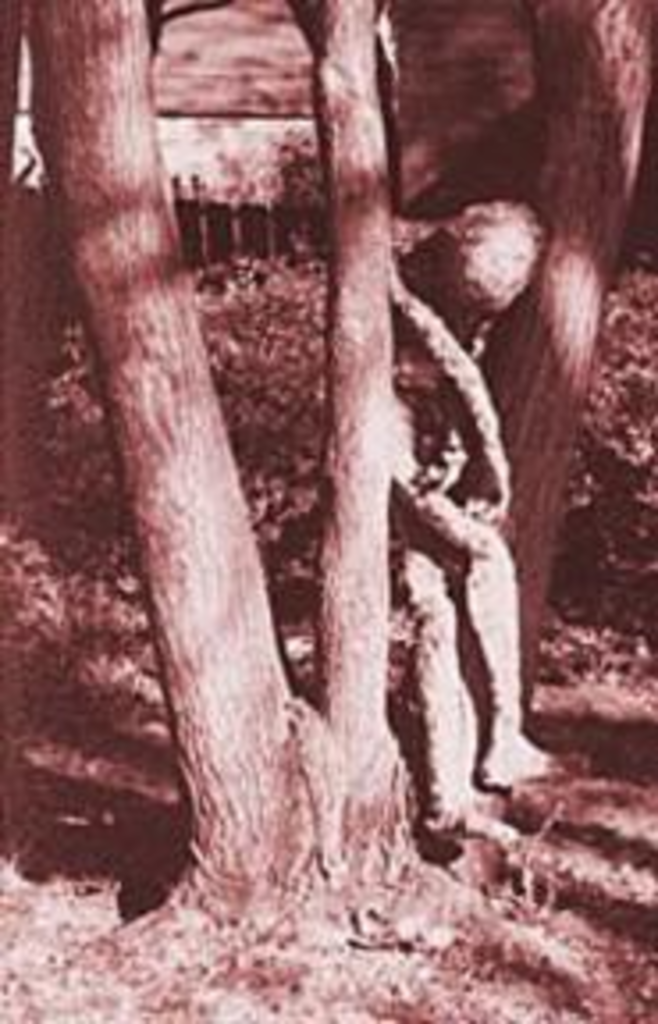 There’s no denying the signs: Near-naked coeds are carousing downtown, tulips are at full tilt, and everyone is feeling just a little bit prettier than usual. It’s spring! Time to spend an afternoon walking the broken sidewalks of East Lawrence to check out the locals’ unabashed art.

It’s true — what Lawrence lacks in art spaces to show decent contemporary art (there are a few, but they are a lonely lot) is made up for in the ripe, folkish expressions of the eastside residents. So pick a sunny afternoon, stop downtown for a coffee to go, slather on some sunscreen (you don’t want to ruin your artsy pallor, now), and head east of Rhode Island Street to check out the creative accumulation of detritus overflowing the eyes. And even if you have to drive from KC, shun the car when you get to Lawrence. Wheels are good and fine, but to catch the tiniest details and be surprised by the latest offerings in East Lawrence, travel by foot provides the richest experience. There may be 50 or more homes in this area that offer the folk/naive/grassroots art lover plenty to feast on, but the following are some high points on which to base an afternoon. It’s out there for your pleasure, so have at it.

Head north on Massachusetts to that depressing beast, the Riverfront Mall, and walk down the length of the parking lot for the best view of the garage on the other side of the rail. Cute and narrative, the cement, tile, and mirror mosaic garage is a brightly colored palette overflowing in Lawrence iconography: A snake, a tornado, eyes, and funky birds festoon the garage that, from the street side (at Connecticut and the river), is as unassuming as Grandpa’s toolshed. Be careful when treading nearby: A sign warns that there is to be no hunting and no wolf-dogs on the property.

The block between 7th and 8th and Rhode Island yields the more typical Lawrencian yard art. One display stands as an homage to the lesser domestic appliances, presenting them in the dirt and flowers as beautiful specimens worthy of adoration. Rocks form a circle to hold a pond of tulips guarded by two old irons and a chrome KitchenAid mixer. Across the sidewalk, a lone yellow telephone sits atop a mound of dirt, while behind, a tired, dirty doll is enthroned among scattered debris. A wreath of ties adorns the porch, echoed by other rings hanging from nearby branches. This is what some types — you know, the types who live in subdivisions with trees that are held up by wires — fear in their neighborhoods with their coddled property values and strict expectations. But a careful look reveals that this is not a yard of trash but a labor of love.

Similarly, the pink house on the corner of 11th and New York seems to feature an undesignated gathering of assorted junk and forgotten items, but a playful hand is revealed. Utility-line insulators stand watch over the yard; a raccoon, a dirty doll (this one a little more grungy and demented), and a naked mannequin bust share space with a mannequin leg that juts out of the dirt to balance a bird feeder upon its toes. Again, there is to be no hunting on this property.

The block at 7th and Rhode Island also hosts an apparently growing Lawrence phenomenon: papier-mâché figures housed in trees. The assumed female form scrunched in a tree has seen better days (she was once wedged in an almost confrontational manner; today she slumps like a tired heap home from a payday bender), but she is striking, nonetheless. Her “skin” is pocked and crabbed and peeling, yet she is vibrant in her relatable figure. She does not look like a person, necessarily, but a feeling, and her presence can be quite alarming. Witness other papier-mâché in trees on 11th Street between New Hampshire and Rhode Island: Most witnesses guess it to be a nose.

More skilled artistic endeavors do exist in this part of town. The muscular mural on the garage on 9th Street between Connecticut and New York is carefully painted, and the artist’s influences by the Mexican muralists is apparent but not distractingly obvious. The iconography is contemporary (a laptop computer floats among a bird, a gun, and a guitar), and the word “artwork” painted in reverse tips a hat to the Russian modernists. A pair of gorgeously rendered hands playing with string set this structure as a jewel in all of Lawrence.

Smaller odes to everyday art float among these larger works of expression. Mannequin legs falling from a garage window (12th and New York), a slithering cement and marble snake (the alley at 8th and Rhode Island), and a bowling-ball walkway (10th and Rhode Island) show us that art is in everyone who is not afraid of what the neighbors may think.