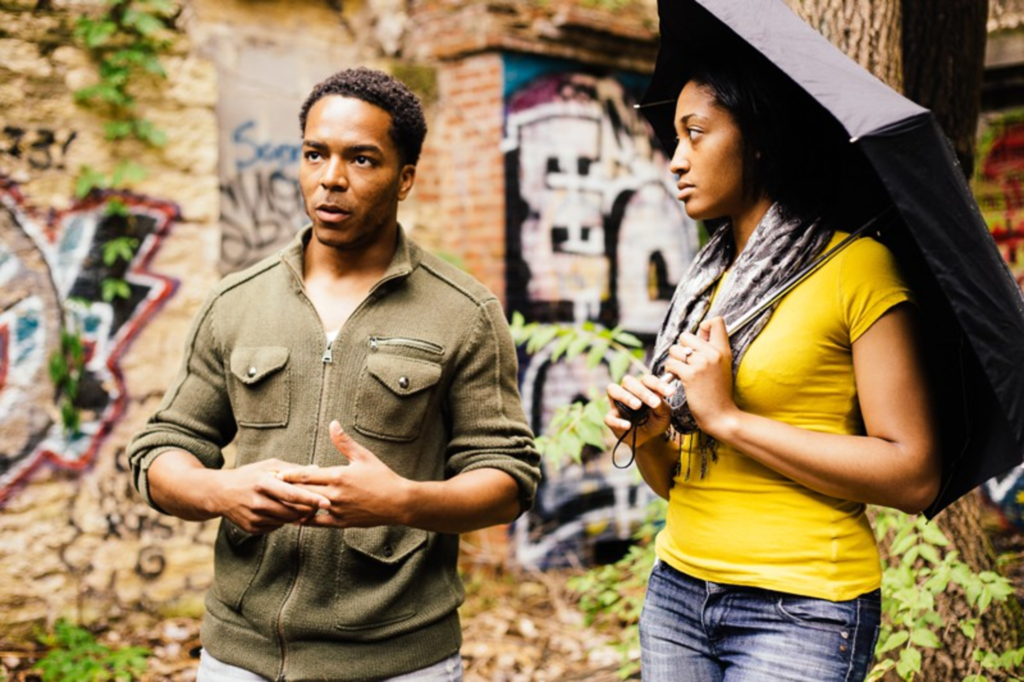 Daniel Edwards and Ebony Burnside went to the Greater Kansas City Home Show at Bartle Hall in March. The two were getting married and they needed a fence for their castle. “And he’s like, ‘Sure, every man’s home is his castle,’ ” Edwards says, recalling his conversation with a vendor. “I kept trying to explain that I was serious, that I really did have a castle.”

Edwards is talking about the former Vine Street Workhouse, a hulking limestone edifice built in the style of a 16th-century European castle. The long-dormant structure, a prime spot for illicit gatherings, has graffiti-tagged walls and no roof, with trees threaded through steel beams. It sits on 1.9 acres at 2001 Vine, where Edwards, Burnside and a host of volunteers have, for the past four months, worked to clear out more than 22 tons of trash. The forgotten building had become a dumping ground, in spite of efforts, as recently as 2007, to have it designated a historic site.

Edwards, 27, has gotten used to laughing good-naturedly whenever someone tells him that restoring a castle sounds crazy. But when the laughter ends, he usually flashes a smile and asks how that person’s talents might help further this project or the next. Because for Edwards and Burnside — who married there, amid the ruins, June 8 — the castle is only the beginning.

“Most people have a wedding and then pack it up,” Edwards says. “We wanted to find a place to start our life together in this community.”

So the castle is the first project for 2orMore, the nonprofit organization that Edwards founded as a platform for millennials to share and achieve their community-oriented goals.

“The civil rights movement had a central issue,” Edwards says. “Our generation doesn’t have central issues. But if we put together all these ideas, maybe then we can address education and poverty.”

He wants to turn the workhouse into an open meeting space with Internet access and a community garden. But it’s not just his vision at work on Vine Street. Vewiser Dixon, the founder of the Kansas City Business Center for Entrepreneurial Development (KCBCED), which owns the land at 2001 Vine, sees the pocket park as the first part of a larger initiative that he has termed the ‘Entrepreneurial Village,’ a business incubator focused on science and technology startups as part of a mixed-use development.

“We hope that people come out and join us and get in where they fit in,” Dixon says. “Vine Street doesn’t just stop at 18th and Vine.”

The castle wasn’t built with parties or gardening or tech startups in mind. The City Workhouse opened in 1897, its limestone hand-quarried by the prisoners who would be housed within its thick walls. It was heralded back then for a relatively ahead-of-its-time emphasis on better sanitary conditions for inmates, and for being a significant improvement on the wooden structure that had stood on the site for more than 40 years.

The stone building held male prisoners until 1911, and women prisoners for another seven years. Then it sat unused. From 1925 through 1972, the city used the building for a multitude of purposes: a municipal garage, a public-works storeroom, a dog-­immunization station. Once the city decommissioned the property, trees and high grasses slowly blended the structure with the surrounding hillside, and people took to dumping their trash around the neatly framed walls and, eventually, inside them.

For 42 years, the land sat vacant and was, most recently, in foreclosure. In March of this year, though, the KCBCED purchased the property, and Dixon agreed to let Edwards and Burnside reimagine the castle space.

“I saw in Daniel a shared vision,” Dixon says. “Everybody is always competing. But this is about shared prosperity.”

Dixon wants to build a new headquarters around the site for his organization, as well as that business incubator. His plan for what he calls an “urban technology park” also calls for a 100-unit, multifamily housing development, on the east side of 2001 Vine.

Dixon won’t disclose the property’s purchase price (he’s hoping to acquire more land in the area), but he estimates that it could take $3 million–$5 million to fully renovate the workhouse. Edwards has raised $12,500 to date, thanks to a recent donation from the Community Capital Fund that has allowed a start to renovations and the community-garden project.

Fundraising won’t be the only challenge in the coming months. Kansas City Community Gardens conducted an audit of the land and found asphalt and detritus from old buildings under the soil. Edwards believes that there may be as many as three old structures buried on the property.

On an overcast Saturday in May, Edwards and Burnside are walking the castle grounds. Rain has forced them to reschedule a benefit concert — the first of what they’ve conceived as a series of live music events at the castle.

“We don’t want this to be a community center,” Edwards says.

“But it could be a center for the community,” Burnside adds.

At Edwards’ feet are waterlogged boards, album covers faded from sunlight and hundreds of pounds of trash.

“Our generation needs a place to come together,” he says. “This could be the place.”

As if on cue, a young woman and a young man walk onto the property. They had read about the castle on Facebook.

“I’ll like it. I’ll share it. I’ll pray for it,” the woman says as she picks her way through the debris.

God and Facebook hear all prayers, but John James has tried to answer some of them. The president of the Wendell Phillips Neighborhood Association has been a staunch supporter since Edwards approached him in March.

“This is the beginning of us trying to change our brand,” James says. “We might be the poorest neighborhood in the urban core, but we don’t have to look like it or act like it.”

A change in perception, however, requires several neighborhood stakeholders to come together, in spite of a sometimes fractious history. This is where Edwards comes in. He has secured Mutual Musicians Foundation International as 2orMore’s fiscal sponsor during the nonprofit-application process. The goal is to use the MMF’s wireless connectivity to bring Internet to the castle site.

Anita Dixon, the MMF’s executive director, says the idea of creating a meeting space for events and concerts fits her organization’s mission of revitalizing the Jazz District.

“Everyone thinks that 18th and Vine should be on the same page,” she says, “but that’s not how a community works. We can be separate but not set apart. I love the fact that we overlap.”

As rain turns the dirt-packed castle floor to mud, Edwards descends a short flight of stone stairs on the west side of the property. The cleanup efforts have so far focused on the ground level; the lower area is still trash-strewn and graffiti-marked. As he looks at the tags and misshapen faces spray-painted on the rock, he says he has thought about turning this into a graffiti wall — something to be honored with a graffiti convention that would attract artists from around the country.

“This isn’t about erasing history,” Edwards says. “I think I’ve been given a gift to see the potential in everything. I was designing buildings. Now, I’m just designing people.”

Edwards has a degree in architectural engineering from the University of Missouri–Rolla and until last year worked as a building-plan designer for J.E. Dunn. When he told his mother, Renee Weaver, that he wanted to restore the castle, she immediately thought of her father, Robert Wiley, who worked as a homebuilder on the East Side.

“My dad was just somebody who would take something and say, ‘I want to make this pretty,’ ” Weaver says. “Daniel has a vision. His dreams are bigger.”

And one of those dreams just keeps pulling people into Edwards’ orbit. At the end of March, as Edwards and seven of his friends began to sift through couches and bottles and discarded toys, Rachel Boese was walking the grounds to do a photo shoot for her cosmetics company. When Edwards told her about the cleanup, she volunteered her help on the spot.

“We had the same vision independently to make the castle a useful space for Kansas City,” Boese says. “It’s an interesting piece of history applied to a modern purpose.”

She and another volunteer, Chad Ruddle, have become the de facto leaders of the project. Boese hopes that the castle can be a historic tourism site that helps drive the local economy in a fashion similar to certain attractions in her native New Orleans. Ruddle wants to hold a Kansas City Zombie Walk event on the property, and he has already commandeered “KCZW” trash cans to discourage people from littering on the property.

“I think everyone wants to feel that they are important or making a difference, and this is a really good outlet for that,” he says. “You can see the fruit of your efforts very quickly.”

In April, Boese and Ruddle helped organize the Extreme Castle Makeover: a volunteer workday that Edwards estimates drew 75 people to cut down trees and pick up laundry baskets, tires, building materials and dead batteries. Getting people from across the city to the East Side is why Edwards ultimately believes that the renovation project is sustainable.

“The biggest compliment that I got was when I went to pick up a guy in the Northland who knew how to run a Bobcat, and he asked, ‘How are you involved with this?’ He said, ‘I don’t want you to be offended, but you don’t look like anyone I know who is working on this,’ ” Edwards says. “It’s not about race or color. This is about a vision that people have that we can get behind. It’s a purpose. It doesn’t matter what we look like.”

And for James, who has lived in the neighborhood for 10 years and has served as president of the neighborhood association for the past three years, the castle represents a potential shift toward development.

“This is us saying that we want a seat at the table and a voice in what happens in our neighborhood,” James says. “We’ll be there to support it or, with boots on the ground, to protest something if we don’t like it.”

Edwards and Burnside said their vows in a roofless room that, a month earlier, held countless square feet of forgotten toys, ripped trash bags and empty laundry detergent bottles. The floor now had a layer of wood chips, with green artificial turf laid down as an aisle between rows of white folding chairs. The couple stood on a white stage under a canopy of flowers, against a backdrop of limestone wall scrubbed free of spray paint.

“Out of this rubbish,” James said after the ceremony, “we will realize two unions under God: the marriage of this purpose-driven couple and the union of this great city uniting to erect this monument of hope, unity and faith. People I talk to say this is an impossible task, and to that I say that is why we must do it.”

Burnside has taken Edwards’ name, and together they are looking for a house in the Squier Park neighborhood. Their castle dream is coming to life, yet it’s also more symbolic than ever, one project that could light the way for broad community involvement.

“How do we collect all these crazy, insane, wonderful, isolated ideas onto a single page for collective action?” Edwards says. “We don’t just need a castle. We need 20 ideas like the castle.”