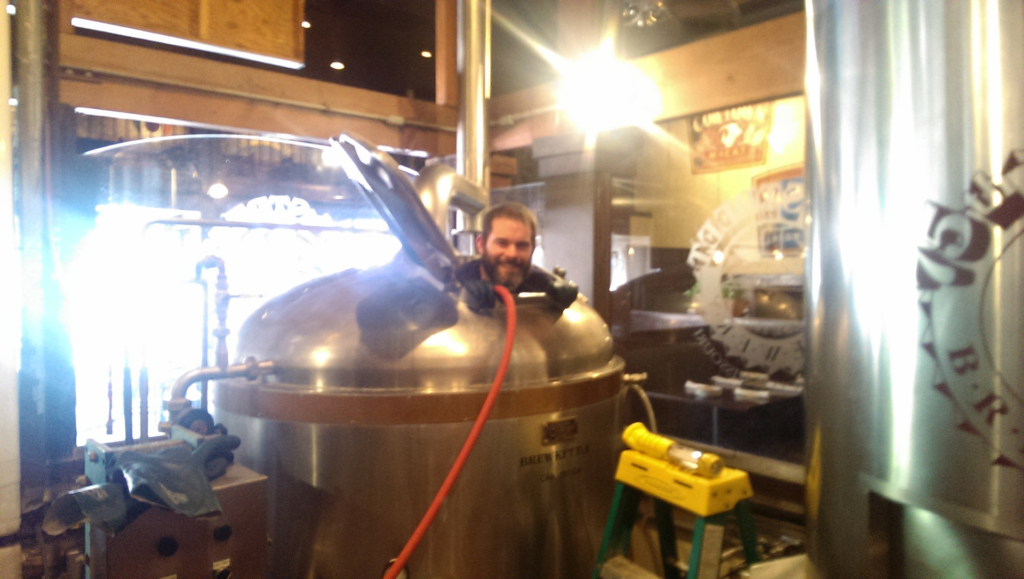 “I had no expectations of winning whatsoever,” says Puls, a pediatrician at Children’s Mercy. “I had to go to work that night and was just feverishly eating buffalo wings.”

Puls had entered a saison, which he dubbed The Battle Of The Frontiers, a French saison brewed with apricot. (Puls took the name from the series of opening World War I battles with Germany invading Belgium and France; all three countries’ yeast is represented in his brew.)

“When they announced that I had won, my hands were covered in buffalo wing sauce,” he says. “I had to go to the bathroom before I could shake [brewmaster] Pat [Sandman]’s hand.”

Friday, maybe Puls will have another plate of wings when he, his family and friends go out to dinner at 75th Street (520 West 75th Street). He’ll definitely be drinking his saison, which he and Sandman scaled-up the during a February 26 brewing session.

“It’s an amalgam of my recipe, converting it over to their system,” Puls says. He says he recipe was streamlined a little bit to fit 75th Street’s system. “It’s definitely going to be a different beer.”

Puls says he and Sandman made a full batch of The Battle Of The Frontiers, which he estimates to be about 250 gallons and should last about a month.

Puls spent an eight-hour workday with Sandman working on Friday night’s finished product. “He had me in the mash tun and the fermenter cleaning them out,” Puls says. “I kind of assisted him in making the beer.”

Puls, who has been homebrewing on and off for about seven years, says his winning entry was the first time that he’d brewed that saison.

“I figured free wort, why not experiment?” he says. “So I kinda went all or bust. So I experimented with blending yeast and also a fruit addition. So that was the first time that I ever made that batch. In fact, that was only the second saison that I’ve ever made.

“I wanted a slightly larger beer,” he adds. “Since I was going to make a saison, I wanted it to finish dryer or attenuate lower. I added some Belgian sugar. I initially fermented it with a Belgian strong ale yeast and believe it or not a small portion of Kölsch to give it a lighter finish and then racked it to a secondary where I finished it with a French saison yeast, Belgian sugar and apricot nectar. A little unorthodox. Probably a little crazy. I’m sure some beer purists would scoff at the process, but I took it as a chance to experiment since it was free wort.”

Puls says he homebrews “whenever my kids let me” on his turkey frier with a converted keg as a brew kettle and glass carboys as fermenters. Once he’s finished, he kegs or bottles his batches. He calls his operation “Ambivalent Brewing” with this motto: “We are passionate about our beer, and pretty sure what’s in it.”

Puls admits that he went “a little overboard” with homebrewing after winning the competition.

“I made more beer than I can drink,” he says. “So I’m kinda cutting down right now, but I usually brew once every six to eight weeks. I keg at home, and I have a three-tap Kegerator at home.”

On tap now, he has a sour cherry, a mosaic single-hop Belgian IPA and, keg conditioning, he has a tropical-hopped, sessionable saison. Undergoing secondary fermentation now is a dark saison.