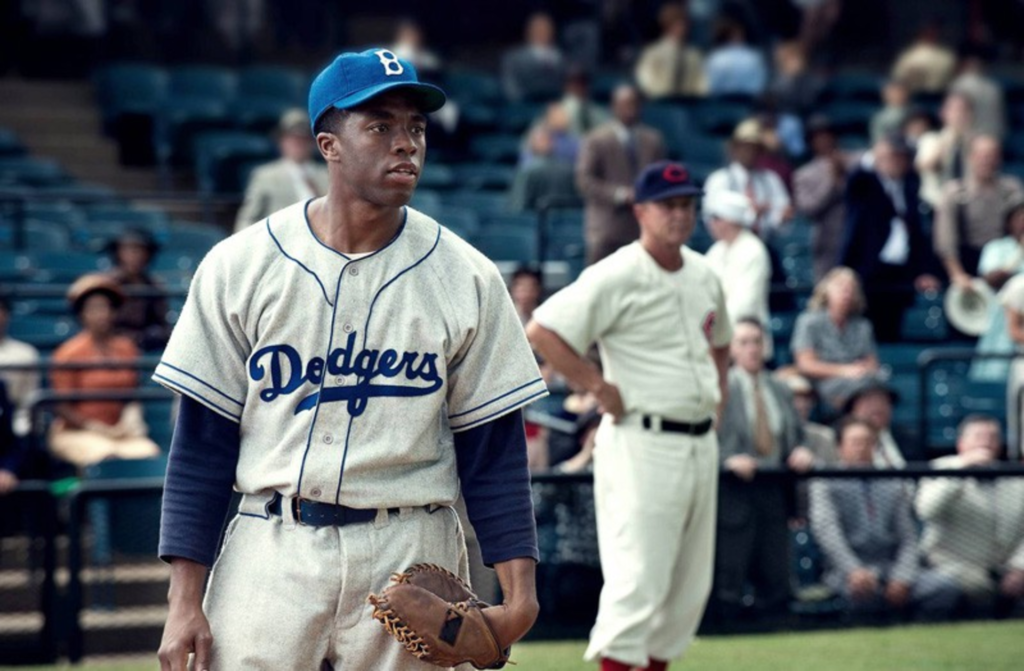 Complaining about a movie’s score is like carping about how a game is refereed. Neither music nor officiating ends up mattering all that much if the talent is working. But: A solemn orchestral motif to heroize the occasion of Jackie Robinson showering for the first time alongside his teammates is a blown call.

You can picture 42 writer-director Brian Helgeland in the editing bay, dialing composer Mark Isham on his iPhone and yelling, “Have you watched the shower scene? I need brass!” And we haven’t yet come to the movie-capping slow-motion homer, tracked to a cue as loud and boorish in its Americana striving as Randy Newman bludgeoning Aaron Copland with Wonderboy.

Roy Hobbs’ trusty bat is among the few baseball clichés absent from 42, a rigorously competent, “based on real events” version of Robinson’s story that’s very much in line with Barry Levinson’s serious, burnished — and hollow — The Natural. It’s lovely picture making (thanks to Don Burgess’ camerawork and some impressive CGI), assembled with journeyman skill and acted without undue flourish. You get your flannel uniforms and vintage rides, you get your baseball ownership as shadowy star-chamber villainy and fizzy pep talks, and you get your precision-timed triumphal wallops.

But even though we’re watching two key years in the barrier-breaking life and career of Robinson (Chadwick Boseman, charismatic and capable but not entrusted with much), a lot of the victory on display belongs to white people — mainly Branch Rickey, baseball’s most titanic pragmatist (and the man who stole Robinson from the Kansas City Monarchs).

That means Harrison Ford, who plays Rickey, is onscreen a lot. The man has been cashing checks without ID for maybe a decade and a half, and he hasn’t seemed involved in a role since he was The Fugitive, back in 1993. But here he gives his best performance since at least that movie, and maybe since his mannered-to-the-snout turn in 1986’s The Mosquito Coast.

At 70, padded out and bow-tied and in the care of a not especially talented milliner, Ford seems to have wandered in from a road production of Inherit the Wind. His Rickey is grampsy and crinkly, with double-wide eyebrows glued on and a cigar always at the jab (a variation on the actor’s usual don’t-make-me-keep-pointing-at-you brand of spleen). But once you get past waiting for him to hold up a bag of Pepperidge Farm Nantuckets or offer directions to Grover’s Corners, he wears the role fine and does what’s expected of him: Anchor Helgeland’s movie with likably gruff paternalism.