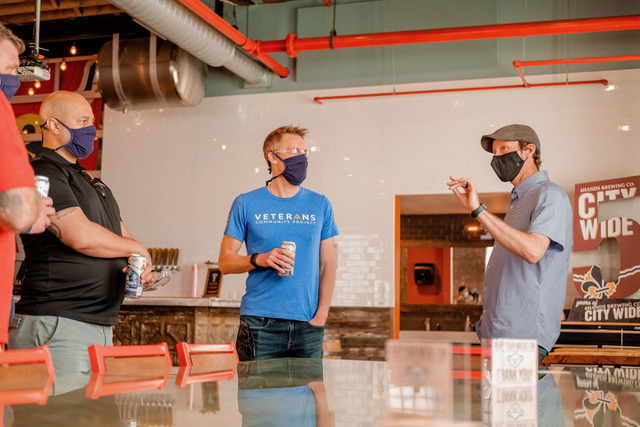 For a decade, 4 Hands Brewing Co. has been churning out inventive brews like the Tiger’s Blood hard seltzer inspired by the classic snow cone, and fan-favorite IPA, Incarnation. A beloved St. Louis institution, 4 Hands is no stranger to a wider Missouri audience including Kansas City, where they’ve been distributing their flavorful creations for almost nine years.

Now, they’re going the extra mile by introducing State Wide to the scene—for every case of this pale ale sold, 4 Hands is donating one dollar to Veterans Community Project. VCP is a nonprofit with campuses in Kansas City and Longmont that galvanizes community efforts to make a difference in the lives of homeless veterans. Currently, they are expanding with a campus in St. Louis, and 4 Hands has set a goal of raising $50,000 in support.

Kevin Lemp, the founder of 4 Hands, knew from the start that he wanted the brand to be more than just beer. Jeremy Danner, 4 Hands’ Kansas City-based specialist and brand ambassador, says this is an ambitious goal, but they’re succeeding.

“Kevin always wanted the brewery to be a pillar in the community in St. Louis. And as we’re looking to grow our business throughout Missouri, we’re working to be a brewery that gives back as a strong member of the community.”

And thus, their flavor geniuses started by developing City Wide, an American pale ale that bursts with aromas of citrus, melon, and tropical fruit. For every case of City Wide sold, 4 Hands has donated one dollar to St. Louis-based community partners. Over the past five years, they’ve given back $250,000 to a variety of organizations including Ronald McDonald House, St. Louis Public Radio, and Hope for Young Adults with Cancer. They’ve also expanded the program to KC with local beneficiaries including The Nelson-Atkins Museum of Art and KC Pet Project.

As part of their passion for supporting a wider Missouri community, they are excited to release State Wide under the City Wide brand. Danner says the pieces for this collaboration with VCP fell perfectly into place during their first call with the nonprofit’s CEO, Bryan Meyer. Danner thought they were interviewing for the partnership; Meyer was already raring to go.

“About five minutes in, Bryan stopped and was like, ‘Hey, wait a minute. We should tell you guys we’re in. Everything’s cool. We just want to discuss the details now.’ And just through talking with them, we’ve discovered how amazing they are. I feel like we’re the lucky ones getting to work with them!”

Lemp, Danner, and the 4 Hands team have been “blown away” by VCP’s impact.

“Their work is far more than simply providing a place for homeless veterans to live because that’s not the entire solution to homelessness, or to the problems these veterans are experiencing,” says Danner.

Indeed, VCP takes a two-fold approach to homelessness in the form of The Veteran Outreach Center and temporary housing options. The Outreach Center is a walk-in clinic that helps clients with “navigating the VA and their benefits, identification services, mental and physical health referrals, financial counseling, and employment support, among other services.” The VCP Village is their community of tiny homes built by veterans, for veterans, in order to provide transitional housing as folks seek out permanent solutions.

The 4 Hands team knew that for their efforts with the Veterans Community Project to matter, they needed to make a delicious beer that their community would love.

“I think our brewers nailed it,” says Danner. “For me, State Wide opens with bright aromas of grapefruit, orange, and apricot provided by Simcoe and Amarillo hops, and gives way to a pillowy, slightly sweet pale ale with tons of citrus flavor a touch of resinous pine. I think it finishes fairly dry and with a 5.5% ABV, it’s super drinkable. I dig beers that make me want to have three or four instead of more in-your-face beers that are one and done.”

4 Hands isn’t stopping at State Wide, though. They’re sponsoring golf tournaments with Girls on the Run, reaching out to local Kansas City artists to design beer labels, and they have an upcoming collaboration with a KC-based brewery with a huge fan base. (Yes, it’s still a secret.)

The brewery cares about Missourians from St. Louis to Kansas City and all the places in between. The taproom prides itself on creating a family-friendly environment, and they work hard to distribute creative beers that are “approachable, yet still complex and interesting,” according to Danner.

“Selling beer is awesome. But we also want to find ways to weave ourselves in Kansas City organically through personal relationships and find organizations and people that are doing things that we think are cool and important. We’re incredibly grateful for the support we receive and feel fortunate to be in a position to help.”

Sound delicious to you? Yeah, it does. Check out 4 Hands Brewing Co.’s awesome beer list, distributed in Missouri by Major Brands and Kansas by Central States Beverage and Crown Distributing. Also, check out their wide selection of merch including apparel, glassware, stickers, and more.