33 Resolutions Per Minute: Jams for a long, dark December 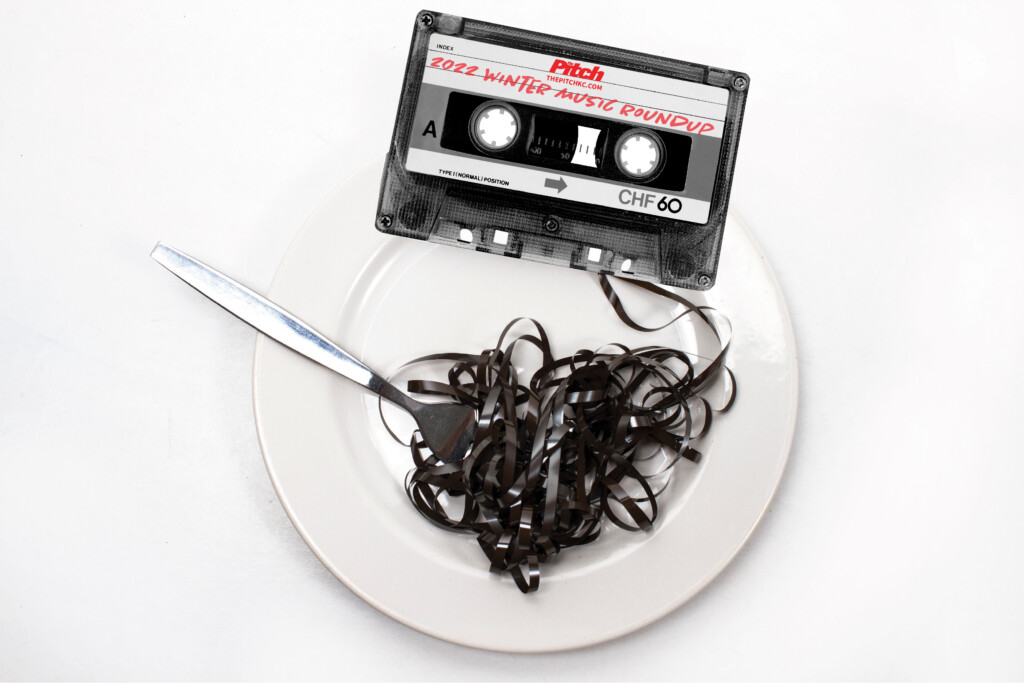 There are less than two weeks until Christmas. Your family member/friend/partner/weird Secret Santa pick at work is big into local music, but you have yet to decide what to get them. Please allow us to take you through a variety of recent local releases from which you might make your selection. We have you covered with country-tinged rock ‘n’ roll, dreamy indie rock, hip-hop flavored jazz, garage rock, psychedelia, and more. 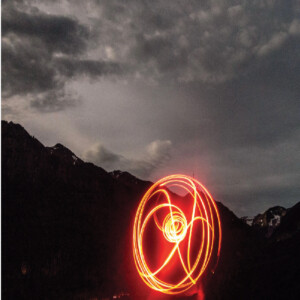 Til Willis & Erratic Cowboy
Grinding of the Stars
(Self-released)

For this new LP, guitarist and singer Til Willis took a stripped-down power trio version of Erratic Cowboy to record in a 122 year-old barn on drummer Austin Sinkler’s property. Along with Eric Binkley on bass, the three of them thrashed out the basic tracks in the barn’s loft in May 2017. While there are overdubs here and there, the real appeal of Grinding of the Stars’ 10 tracks is the energy, verve, and live warmth achieved from those initial sessions.

The ever-so-subtle reverb from those century-old rafters leaves Willis and company’s songs sounding as if they’re right in front of you. The sheer rawness of “Cold Hum” will stop you in the middle of whatever you’re doing to sit and listen. While the album as a whole benefits from turning the knob on your stereo as far to the right as you possibly can, the one acoustic-based song, “Seed & Root,” saw Willis step out of the barn and climb inside a silo to record his vocal and guitar, with all the reverb on that particular track from a mic he “ran high up the silo’s concrete wall,” per the musician’s Facebook.

Grinding of The Stars is available on black vinyl and digitally at tilwillis.bandcamp.com 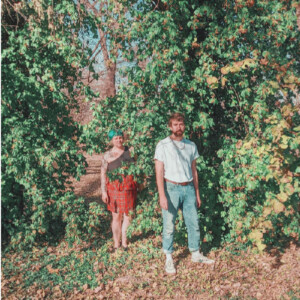 Musicians Katlyn Conroy and Orion Dollar have been making music together for over half a decade, but their new project together, Dooms, marks a newfound collaborative process for the pair.

While Dooms’ debut album, Shellshine, was recorded almost four years ago, bringing these songs to completion took some time, with Dollar learning all the skills needed to self-produce—engineering, mixing, and so on. Dollar also collaborated with Conroy on the songwriting and performing.

The end result, however, is a collection of songs that see the pair branching out and letting the music breathe more than one might expect from Conroy and Dollar’s time together in their previous band, La Guerre. Replete with sparsely insistent drums, obscure samples, and scintillating guitars, the time spent working on this album is readily apparent and well worth the wait. The band’s name is well represented in songs such as “number’s up,” with the lyrical passage, “The worst part/ I’m pretty sure that I’m unable to give up on love/ It’s too tough/ And being my own best friend is a bummer.”

Shellshine is available on black or “doublemint” green inside blue vinyl and digitally at highdivekc.com 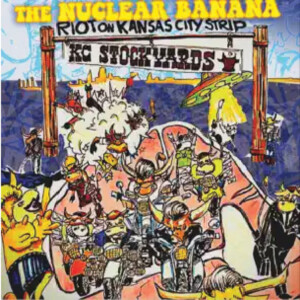 Joey Skidmore has fronted the Joey Skidmore Band for more than three decades. Opening for a cavalcade of classic garage rock acts as part of his annual Skid-O-Rama since 2015 has put the longtime rocker in contact with many legends of the genre, bringing this supergroup to life. Most notably, The Nuclear Banana features Tony Valentino, a founding member of and guitarist for the Standells. Here we also have Elan Portnoy of The Fuzztones, Mark Stein of Vanilla Fudge, and Eric Ambel of the Blackhearts, among others.

Riot on Kansas City Strip is a well-produced collection of originals like the amped-up opener “You’re Worth the Risk” or slight-but-fun and keyboard-inflected “Scooter Girl,” alongside covers of the Standells’ “Sometimes Good Guys Don’t Wear White,” Barry McGuire’s “Eve of Destruction,” and the Rolling Stones’ first top 40 hit, “Tell Me.” Your enjoyment of the album is likely to be determined by how much one can tolerate vocal ranges limited by age, but the backing band is tight as hell, and the arrangements draw forth vibrant life.

Riot on Kansas City Strip is available on banana yellow vinyl at joeyskidmore.com 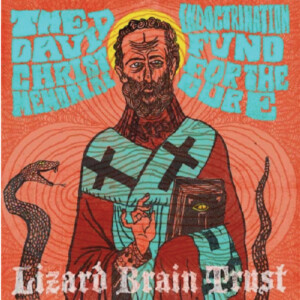 Featuring 3/4 of longtime pop-rockers Podstar—drummer JP Redmon, guitarist Aaron Swenson, and singer/guitarist Cameron Hawk—alongside Seth Chandler, one might assume that Lizard Brain Trust would be a catchy, Big Star-worshipping affair. It is not. Fronted by Chandler, the band’s debut album, The David Christ Memorial Indoctrination Fund for the Cure, took two years to come together, was recorded in three different states, and is an indie-rock melting pot of influences.

The band claims Guided By Voices, Sebadoh, Elliot Smith, and New Order as touchstones, and while you can hear elements of all of them, what seems to be the real touchstone for Lizard Brain Trust are all of those early to mid-’90s acts signed in the post-grunge alt-rock boom who got one album on a major and a minor single which received a couple weeks’ airplay before fading away. All of these songs tap familiarly at the back of your brain until you remember something by For Squirrels or Triplefastaction.

Tinged with the eclecticism of David Lowry with Camper Van Beethoven and Cracker, their CD also includes a song called “Six Kids from Bayside,” wherein Chandler croons in a talk-singing tone about Saved By the Bell, before declaring, “That’s it!” while the rest of the band cracks up in the background. It’s a wild ride that feels hidden in the stacks of a college radio station, forgotten since 1994, and brought back to life for a new generation. Eric Bachmann and Robert Pollard would be proud.

The David Christ Memorial Indoctrination Fund for the Cure is available on compact disc and digitally at lizardbraintrust.bandcamp.com 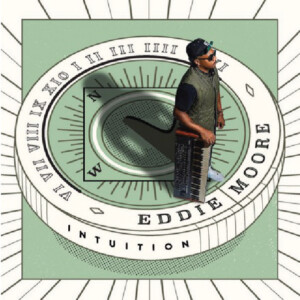 Eddie Moore’s new album Intuition is over far too soon. Coming in at just a few seconds over 24 minutes, the eight songs from the Kansas City-by-way-of-Houston pianist leave the listener wanting more Moore. The minute that Jaylen Ward’s drums hit on instrumental opener “Skatepark Days” and Moore’s synth and piano work begin strolling along; the listener is absolutely hooked.

Equally balanced between instrumental workouts and songs with features from Dom Chronicles and Kemet Coleman, alongside vocals from Yung Mehico (who also lends saxophone to “No Time”) and Branjae, Intuition is a brilliant, exceptionally chill album. Even “Jazz Mercenaries,” with its warrior-adjacent title, is more focused on the idea that “nobody knows what to do with [Moore]” other than getting in a fight. Jazzy while also floating ethereally on a hip-hop vibe, Moore’s solo debut makes the statement that he’s here to raise the level of what can be done.

Intuition is streaming through all major digital music services. 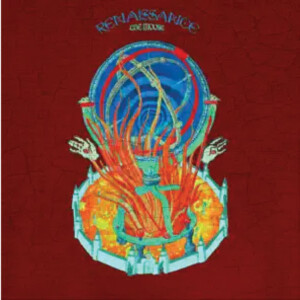 After The Moose’s previous album,Spature, their follow-up, Renaissance, feels positively brief. That epic release stretched to nearly two hours, and we described it at the time as “the sprawling psych-rock journey into madness you need right now.” While nowhere near Spature’s length, Renaissance still sees the Moose leaning into “the first modulation, the destruction of the macrowave from human error, the over-saturation of all the things people want you to see, and more” on an “upbeat, psychedelic journey.”

It’s the kind of album that makes you wonder if maybe you were surreptitiously micro-dosed before putting your headphones on, resplendent as the Moose’s music is with fuzz, echo, delay, and all of the flourishes. Paired with droning and brilliant use of motorik rhythms, this conveys the sensation of strapping yourself to a rocket that’s on its way into the outer reaches of the cosmos. Everything is blown out and distorted, and by the time the final track “Macrowave” marches to its conclusion, it’s time to hydrate and take a nap.

Renaissance is streaming on Spotify. 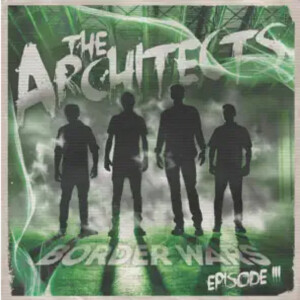 On a Wednesday afternoon in early November, the various social media accounts of the Phillips brothers, along with long-dormant accounts for their equally dormant rock band, The Architects, came to life with a sudden surprise: the third installment of their Border Wars series of EPs was finally available. To put it in perspective, Episode 1 came out almost exactly nine years prior, Episode 2 followed in 2014, and since then, the last music we’d heard from the band was the track “Josie,” appearing on a Wiretap Records benefit compilation called Attention in 2019.

That particular track is what kicks off Border Wars Episode 3, and there’s no better example of what the Architects do (did?) so well. With big rock riffs, anthemic hooks, and the feeling that you’re listening to a band coming all the way live from an arena stage, it perfectly sets up the seven tracks that follow, like the barrelhouse rockabilly punk of “Eddie Cochran (Wannabe Rockanrollers)” or the chunky Clash riffs of “Dead Man’s Gun.” While frontman Brandon Phillips and drummer Adam Phillips have kept busy with their dance-rock band Other Americans and Brandon’s solo electronic project Mensa Deathsquad, it’s been a long, long while since we’ve gotten properly rocked like this, and we certainly hope this portends something more.