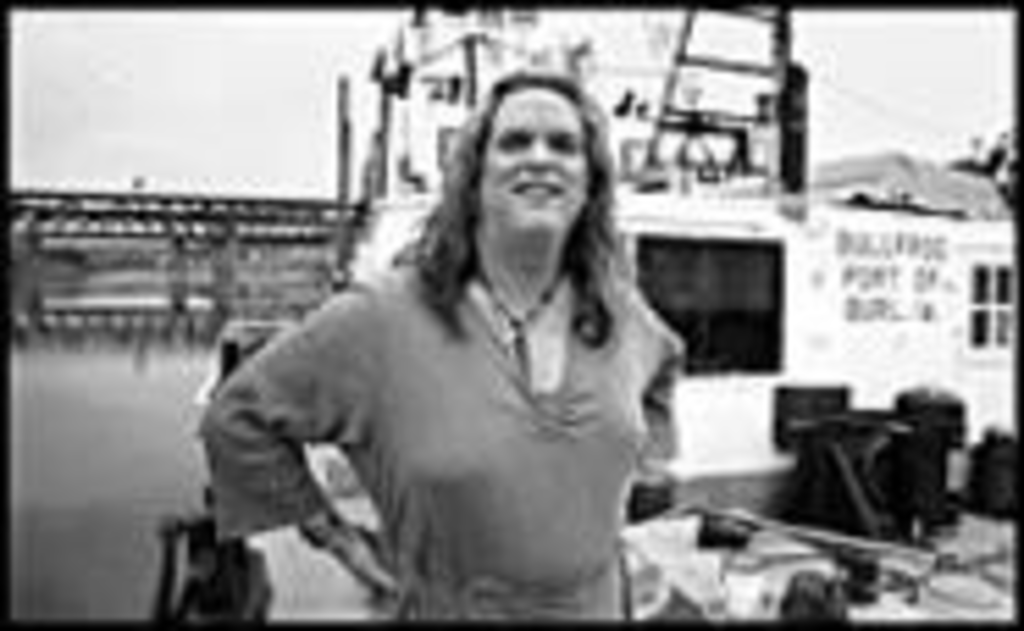 Every morning, Teri McCaulley pulls on her work boots, puts on her makeup and steps onto the deck of the Bullfrog, a towboat hooked to five barges docked near the Fairfax District of Kansas City, Kansas. She’s watching for signs of spring.

Since August, McCaulley — a 6-foot-4-inch, 300-pound gal — has lived with her two rottweilers in a cramped stateroom aboard the Bullfrog. McCaulley and a crew of deckhands arrived last summer to help build Riverside’s new levy. By November, they’d dredged 1.5 million cubic yards of Missouri River sand and rock for the 4-mile flood-control levy, which stands 50 feet high and 100 yards wide. They topped it off with a layer of clay. The job was done.

But by then, the river was too low to let her leave. McCaulley couldn’t maneuver the 125-foot-long, 28-foot-wide Bullfrog out in the 6-foot-deep water without scraping the towboat and barges against the bottom. She needed at least 9 feet of water to go anywhere. Next week, though, as Montana and Minnesota snowmelt finds its way downstream, she hopes to make her escape.

For forty years, McCaulley was a woman trapped in a man’s body. Lately she’s been a transsexual tugboat captain trapped in Kansas City.

Back in 1956, McCaulley was born with combined male and female genitals. Her parents decided the child would be a boy. The sensitive and effeminate Fred Domeyer made an easy target in Andalusia, Illinois, a town of 1,000 people along the Mississippi River. But as a teen-ager, Fred found sanctuary on his 6-foot motorboat. “The river was my escape route,” McCaulley says. “It made me independent. Out there I had to take care of myself.”

Fred married at 22 and fathered a daughter. But his wife divorced him after he told her he had the body of a man but the emotions and needs of a woman. Fred went to work as a deckhand, then was a heavy-equipment operator on a towboat. In 1984, he got his pilot’s license from the Coast Guard. Three years ago, he had a sex-change operation.

McCaulley says she has never made a secret of her sex change. She was fired from one job, but, McCaulley says, the river is a female entity, and it takes care of its own.

Sometimes a river-town roughneck will try to pick a fight in a bar. McCaulley just stands up and pats the top of his head. “I tell ’em, ‘I like the little fellers, and you’re damn near just the right size.’ Then they usually haul ass,” she says.

When she’s not working, McCaulley lives in a 65-foot houseboat near Red Wing, Minnesota.

This winter, she spent her days alone in Kansas City, checking the barge compartments for water leaks, servicing the massive engines and making sure the barges and another tugboat, the Melissa K., didn’t drift away. She read New Age books and watched videos about steamboat and military history. She strolled the Metro North shopping center, slipping on dresses at Lane Bryant and trying on slacks at the plus-size shops.

“This has got to be one of the most depressing rivers I’ve ever been on,” she says. On the bank, a rusty houseboat sits halfway in the water. A wreck of a car is turned upside down, surrounded by debris. A river walk lines the deserted Berkley Riverfront Park. “This could be one of the most beautiful areas if the people of Kansas City would just take the time to clean it up and make it pretty.”

McCaulley recommends that Kansas City launch a floating river restaurant, like one she’s seen in Cincinnati.

“When I tell people here what I do,” she says, “they act like the river is this big, bad boogie man…. They think that if they get too close to the riverbank, something’s going to crawl out, wrap itself around their ankle and drag them in.”

McCaulley knows better. Sometimes she watches eagles teaching their young to fish in the water. She spots deer swimming in neck-deep water. Last month she bundled up in the middle of a snowy night and took out a small boat to listen to the snowflakes hiss as they dropped into the water. It was peaceful, she says.

On April 1, four new deckhands and another tugboat captain will arrive to help McCaulley pilot the Bullfrog and its barges through the muddy water. McCaulley will head to her next job in St. Louis.