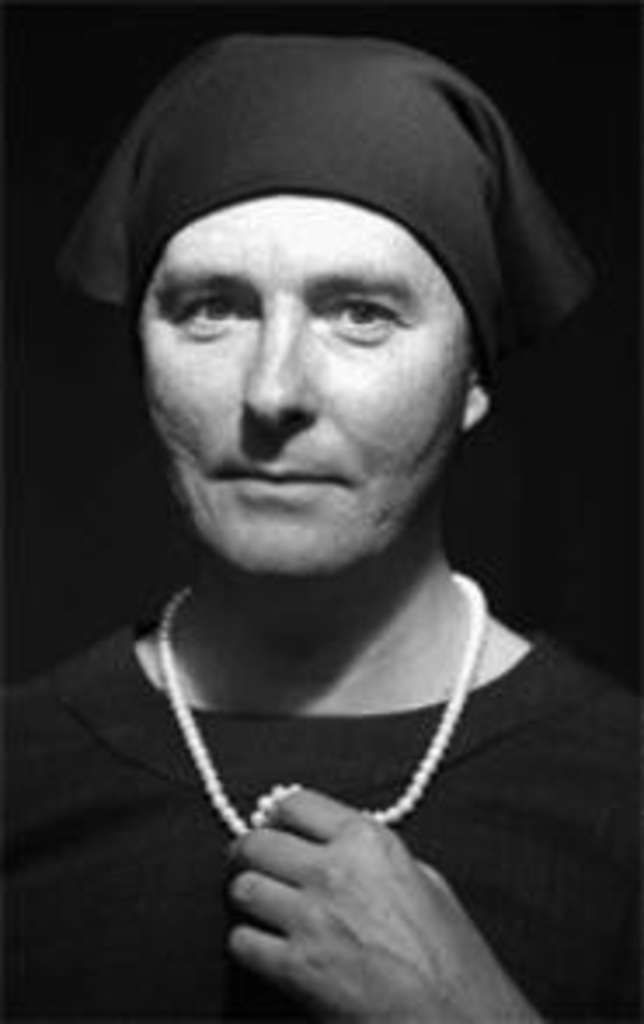 9/9-10/2
For all its megachurches, marriage laws and codified ignorance, Kansas City just can’t get its homophobic goose step on, especially compared with the Rhineland. Say what you will about the Nazis, but they sure knew how to persecute — and they never had to hide their zest for it behind Jesus talk or passive-aggressive Midwesternness.

Still, if you don’t fit in here, consider the plight of the real-life subject of Doug Wright’s I Am My Own Wife. A woman born a man in the time of the Third Reich — a man named Lothar von Mahlsdorf, no less — was soon cross-dressing and calling herself Charlotte. This Teutonic tranny didn’t just survive the Nazis and their camps and the Soviets and their purges; somehow, she did so in pearls.

But maybe acceptance isn’t too far off. Wright’s play, based on correspondence and conversations with the real von Mahlsdorf, won the 2004 Pulitzer and a Tony for best drama and even garnered hosannas from the right-wing Washington Times. Now, von Mahlsdorf’s story opens the Unicorn’s 31st season. Under the direction of Cynthia Levin (whose recent The Exonerated demonstrated the theater’s ongoing commitment to works of social importance), Robert Gibby Brand dons the dress as Charlotte (and also embodies more than 30 other characters). This show about gender identity and one of the greatest horrors in history is also an exploration of memory itself: how, through no fault of our own, we remember things the way we would like to. The show opens at 8 p.m. Friday at the Unicorn Theatre (3828 Main, 816-235-6222) and runs through October 2. — Alan Scherstuhl

Simon Says
This week, kneel at the altar of Neil.

9/9 & 9/10
The local debut of a new Neil Simon play is cause for some kind of celebration — perhaps the theatrical equivalent of a pub crawl. On Friday, catch the premiere of Rose’s Dilemma, a comedy about an overspending author who must pump out a masterpiece fast — at the American Heartland Theatre (2450 Grand, 816-842-9999); then step out to Independence’s City Theatre (201 North Dodgion, 816-325-7367) Saturday for Plaza Suite. Three points on Rose’s Dilemma: First, the titular Rose is reputedly inspired by playwright Lillian Hellman; second, Hellman’s real-life husband, Dashiell Hammett, perhaps the greatest of all crime writers, is here called Walsh McLaren; third, bizarrely, McLaren is a ghost. Quite unlike Simon, who’s king of the town this week. — Scherstuhl

Upstanding Citizens
Here’s a Brigade we’d like to join.

Besides sounding like the sort of organization that crossing guards and hall monitors might join, the Upright Citizens Brigade is many things to many people. It’s a foursome that includes Saturday Night Live‘s Amy Poehler. It’s a New York City comedy venue whose performers show up on Late Night With Conan O’Brien and The Daily Show as well as gut-buster films Old School and Anchorman. It was an innovative — and, sadly, short-lived — television show on Comedy Central that wasn’t lying about its tagline, “Seriously fucked-up sketch comedy.” Our chance to see improv at its best comes Saturday night, when UCB’s touring company makes a stop at the River Market’s Comedy City (300 Charlotte). Shows start at 7:30 and 10 p.m., and tickets cost $20 — a price guaranteeing that members of the Uptight Citizens Brigade won’t be in attendance. Call 816-842-2744 for details. — Rebecca Braverman

Rhythm Nation
The Marching Cobras step it up.

Under the guidance of founder Willie A. Smith, the Marching Cobras have evolved from a junior high talent-show entry to a full-fledged Kansas City institution. Smith’s been providing inner-city kids with both a rewarding creative outlet and an alternative to the streets for 36 years now, and the performances are truly you-have-to-be-there experiences. Trying to describe the infectious drumbeats and dazzling routines — in other words, to gush incessantly — just won’t adequately convey the intoxicating rush triggered by one of their live shows. Smith’s commitment to the city’s youth continues this weekend, when Hale Arena (1701 American Royal Court) hosts Stepping in Style 2005 from noon to 9 p.m. Saturday. The competition spotlights local and national drill teams, step teams and praise dancers. Prediction: It’s gonna be loud in there. Admission is $12 in advance, $15 at the door; call 816-729-4827 or see www.kcmarchingcobras.com for details. — David Hudnall

The Eyes Have It

When we stumbled upon Tina Connolly’s blog, we hoped to find her dishing dirt on the Borogrove Theatre production of Blink Twice for Her and talking smack on co-star Alyson Schacherer. Not because we wish either of them ill, you see — simply because we’ve always thought backstage drama was inherent in the glamorous goings-on of the stage. Turns out the script’s delicious catfights don’t translate to real life. But we suspect that’s actually a testament to the actors’ talents. The two-woman show premieres this weekend and runs through September 25 at Union Station’s City Stage (30 West Pershing, 785-341-3070). Performances are at 7:30 p.m. Fridays and Saturdays and at 2 p.m. Sundays; admission is $15. — Annie Fischer