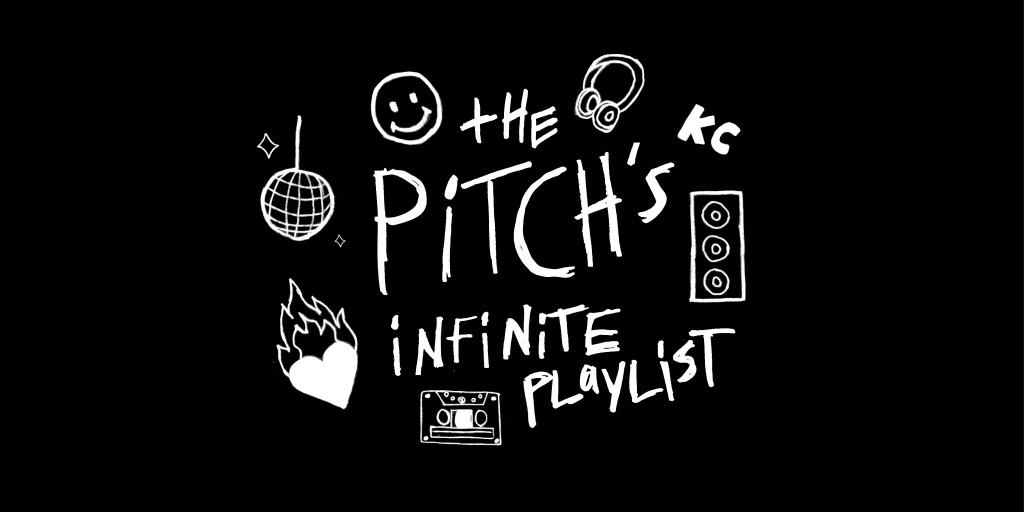 My name is Dia Jane. I’m a 20-year-old KC musician who is also currently a film and computer science double major at Northwestern University. I am also a Pisces moon and kind of self-describe as “dad core” or “anti-anti-folk.”

You can follow me on Instagram (@diaprobably) or Twitter (@probablydia). My solo music and my band’s music (Baby And The Brain) can be found on all music streaming platforms. You can also follow me home at [REDACTED].

“Time to Go” by Jo MacKenzie

Because, really, what kind of KC musician would I be if I didn’t start this out with a Jo MacKenzie song? I actually have the privilege of not being like other KC musicians in that Jo MacKenzie is actually one of my closest friends in the world, and I get the honor of hearing her songs in the early stages. I get to offer my input which consists of things like, “Make the bass more (explosion noise),” and, “I think the sparkles should last longer.”

Jo is one of the most intelligent, creative, and fiercely individual people I’ve ever met, and she does so many things that would scare the living shit out of me. She was the kind of 17-year-old who read Infinite Jest at coffee shops but made it somehow non-obnoxious, and she is now a 19-year-old who just released her fourth EP called Radiance, Girl.

I love every song off the EP but have been listening to this one so much lately. It scratches a very specific itch in my mind at the moment, one that I think has to do with vengeance and certain Taron-Egerton-as-Elton-John gender feelings that I’m very actively suppressing. I tease her about the “You fight all your digital demons” line, but I do think it’s brilliant, as is the rest of the song.

Also, that starting line: “Your mom always called me keeper / so why am I walking away?” Brutal. And deserved. An incredible tune from an incredible talent.

“Sort of Stranger” by The Greeting Committee (feat. Briston Maroney)

Let me reiterate my whole Jo MacKenzie spiel, but now with TGC—some of my absolute dearest mentors and inspirations in the KC music community. This was their most recent single after their sophomore album Dandelion (which is full of bangers, natch), and the lyrics, while contrasted against the lighter indie-pop sound, are visceral! Bloody, even!

Addie Sartino’s writing has always been able to capture such distinct, emotional slices-of-life that should ostensibly be too specific to hurt this bad, and yet “When you’re gone / who gets the toothbrush ready” is, each and every time, a knife under the proverbial scapula. There’s something almost childlike to this song that is so, so intriguing to me, and it breaks my heart every time I listen.

The Briston Maroney/TGC collaboration is delicious, and while Maroney is not from KC, he lives in Nashville, which is, like, totally the KC of Tennessee or whatever. Twenty out of 10!

Imagine me at 11 years old, playing Just Dance 3 on the Wii my mom got me and my younger sibling as a “sorry for getting a divorce” present. This song comes up. I am enraptured. The woman on the screen is wearing a penguin suit. I consider this to be one of the perfect songs, and I consider Janelle Monae to be one of the perfect people. And every time she is mentioned, anywhere I am, I am contractually obligated to say, “Did you know Janelle Monae is from Kansas City?”

Janelle Monae has delivered two of my all-time favorite albums in The ArchAndroid and Dirty Computer, and I think this tune still remains my favorite of her discography (followed closely by “Americans”).

The music video is so good and smart that we watched it in one of my film theory classes for its references to the irreverent 1943 film Meshes Of the Afternoon (which admittedly, I have not seen). It’s just got it all! The usual incredible vocals, a horn section breakdown, Big Boi saying, “Daddy fat sax will fold you and your Macbook…” No notes.

“Wish You Were Here” by Pink Floyd

Yes, I was born in 2001. Yes, I “discovered” this song like, a month ago. Yes, this is humiliating. Yes, I’m a precocious film major and I refuse to engage in a stereotype. Leave me alone. Admittedly, I’ve been listening to this song nonstop since hearing it for the first time. It activates something else indescribable in my brain (it was an immediate add to my “New Kind of Sad” playlist) and is on a short list of songs that have that capability.

I have an office IT internship this summer. On my lunch break, I walk around the Power & Light district feeling generally sorry for myself and listen to this in my over-ear headphones like I’m—fucking, I don’t know, a 2010s Saoirse Ronan character who just read The Bell Jar (I did just read it). Not Lady Bird, though; I’m too subcultural for that, though not subcultural enough not to like at least one Pink Floyd song, I guess.

“No Hard Feelings” by The Avett Brothers

The Avett Brothers are a pretty succinct encapsulation of my childhood. My parents were constantly playing them on the little stereo we had in the kitchen, and to pick just one song of theirs feels criminal, but I did recently get a tattoo of this song’s title, so it felt wrong not to give it love here.

Are you fucking kidding me? Are you asking me to fistfight a bear? I’m screaming at the sky. I have to be that good some day. I have no enemies. This song fucks.

Imagine me sighing wistfully as I list this song. What a gem! Who doesn’t love a sweet tune about turning into a werewolf but getting busted out of lycanthropy by meeting the love of your life in a forest, and now you guys run a farm together but you still kinda long for the pack? And also lots of religious implications and iterations of genesis, maybe?

I sang this song at my dad and stepmom’s wedding a couple years ago, which, now that I think more about the lyrics—kind of a super weird song to sing at a wedding. To be fair, I was asked. And it’s a beautiful memory: “You can wear your fur / like a river on fire / but you better be sure / if you’re making God a liar / I’m a rattlesnake, babe / I’m like fuel on a fire / but if you’re gonna get made / don’t be afraid of what you’ve learned.”

I love this song. I love you. I love life. And boys who would rather be wolves.

“Reno Dakota” by The Magnetic Fields

Another of the “perfect songs,” and maybe the first I ever added to that mental list. So short, so sweet. I think Stephin Merritt is one of the modern geniuses. If you’ve never listened to their albums (it’s in three volumes), 69 Love Songs, you need to rectify that now.

“You know you enthrall me and yet you don’t call me, it’s making me blue / Pantone 292,” was one of the first lyrics I remember really sitting down and thinking about, likely at age seven, and deciding that I needed to get that good someday.

“Reno Dakota, there’s not an iota of kindness in you”— what a brilliant rhyme scheme. It’s one of those songs that, in theory, is very short and simple and sung very calmly, but that, in practice, I scream and headbang to and milk catharsis from.  Every Magnetic Fields song is just a wonder of emotion and perspective and storytelling.

A parting lyric: “Well he’s just a whore / I’ve had him before / it makes me drink more.”