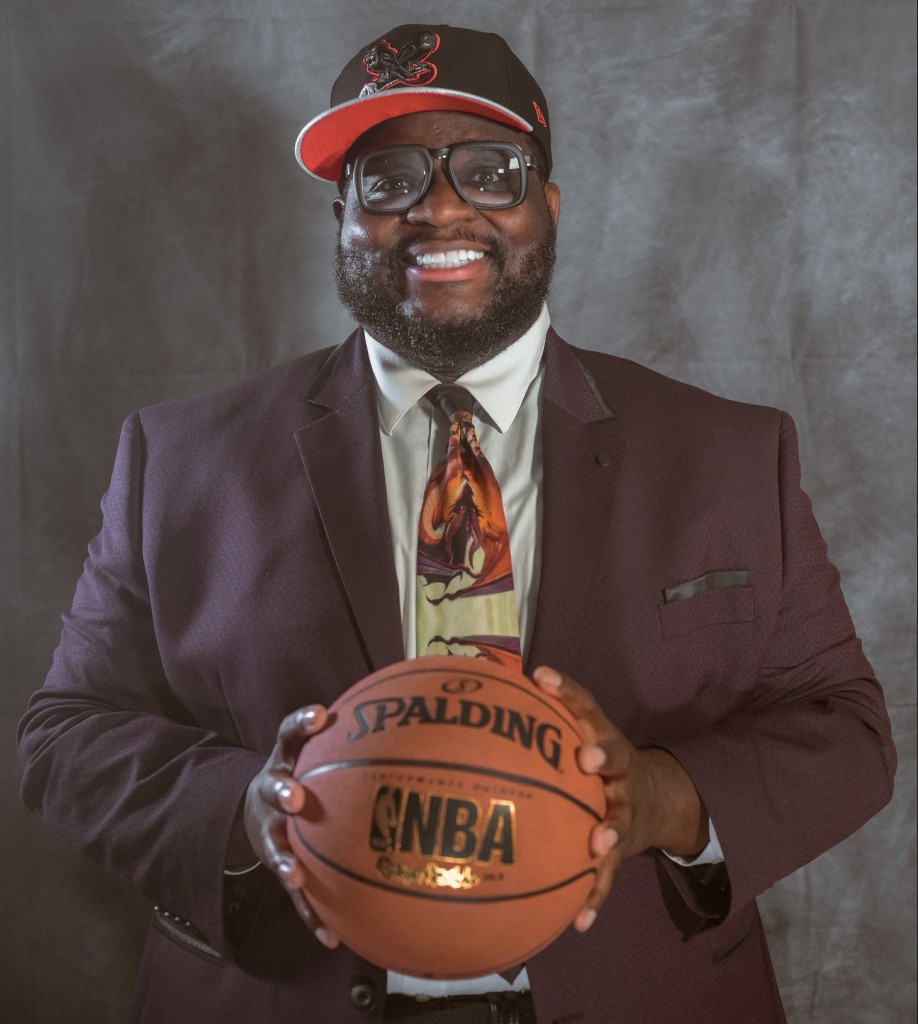 Rapper Raheem Jarbo—better known to nerdcore hip hop fans around the world as Mega Ran—has crafted numerous albums in the past decade that cover every facet of comic convention nerdery. Be it the Halloween-flavored horrorcore of the Ghouls ‘N Ghosts series of releases, the literary-inspired Dewey Decibel System collab with MC Lars, or the old-school wrestling vibe of Mat Mania, Jarbo’s lyrics dive deep into themes of nostalgia and pop culture.

The newest Mega Ran release drops this week. Entitled Live ’95, it sees Jarbo exploring “the intrinsic relationship between hip-hop, basketball and the inner-city cultures that have allowed each to thrive,” while also paying tribute to one of the best sports video games of all time.

Mega Ran takes the stage in Kansas City on the same day his new album drops. We talked to the rapper to talk about his influences and his connection to KC.

The Pitch: The last time I saw you perform was in Lawrence, on tour with MC Lars and MC Chris and I think that was like a solid 10 years ago. What I find interesting is this is also a similar sort of community building package tour itself. What’s the appeal of doing package tours?

Mega Ran: Well, I think that it gives us the opportunity to combine all of our fanbases and supporters. They all get to come out and see everything they want to see at one time. We’ve been playing together for many, many years. Putting everybody together on a package gives everyone more incentive to come out and catch every piece of the show. You know, there’s, there’s no opener. You just come in and see exactly what you came to see, which I think is the best way to experience things these days.

The big thing about this tour–and all the tours this fall, really–is that it’s the first chance to play live in a year and a half. You’ve managed to find some interesting ways to connect with your fans. You’ve had your Twitch streams and you released your autobiography, but what was it like, trying to reinvent how you put yourself out there in the world?

Well, it wasn’t easy, but these were projects that I’d already for a long time been wanting to do and wanted to devote more time to–streaming and finishing the book–so life offered me an opportunity to get them done and give them more of a focus. I was totally happy being able to do that. I think it was a natural progression for me. Over time, I would have gotten it done, but my schedule opened up, so it allowed for it to grow up.

It was definitely a pivot, you know? I missed performing like crazy, but we did mostly like live stream shows and we did Twitch streaming, and so many other things to stay afloat, but they were also fun and connected to what I was doing. I don’t know if it’s a total pivot, but at least partial, but one that I think was naturally going to happen over time.

I think it ties in with your career in general, because it’s always seemed to me that you’re just astonishingly prolific–

I wanna put that on my bio.

Go for it! Is it born out of a desire to make music inspired by all the things you enjoy or something else? All the albums you’ve put out, including the new one–they’re all on these different themes.

Themes and content, to me–I guess it’s just using a different part of the brain and recovering different sections from my childhood or from very influential moments in my life have been able to keep me motivated. I saw a quote or something somewhere that said like, “Creativity is a task force of energy,” and therefore, as long as long as I’m inspired, it gives us the energy to keep going. When I couldn’t find that inspiration in the current day, there was always the past to look back to for really fun moments. And it allowed me to open my mind and create new things. It’s always been that way, but I think my nature is–just because I’ve always felt like I started late, I feel like music became my bread and butter later in life, and I’ve always just wanted to catch up.

I had so many ideas I wanted to get out, but for the longest time, I didn’t have to means or I didn’t have the know-how, I didn’t know the techniques or have the resources. And and now I’m going to do, I just want to make sure that I get everything.

I went to Sunday school way back and they were like, “When you have a gift, you can’t be selfish with it. You have to give it to the world. It’s not yours anymore.” I hold that to heart and I feel like it’s important to give these things to the world. Whether 10 people like it or 10,000, I think it’s important to get these things out of me instead of just running around in my head forever.

What I’ve always found fascinating about your career is the idea that you didn’t become a full-time, professional musician until you were in your early 30s. You were a teacher for quite a few years, as well as being a musician, before you made that leap. What’s it been like over the last decade, compared to those first couple of years when you first stepped away from teaching?

So: what’s the last ten years been like? How much time you got? [laughs] Just talking about that show from 10 years ago you saw? That was two or three months after I quit my teaching job. That was my first real gig experience as a full-time musician on that tour and it was a total baptism by fire. We did something like 40 shows in 50 some days. I played to huge crowds all over the country who had never heard me before. During that time, I got closer to the openers and to Lars and others who were there and we just continued to work together.

It was definitely the best diving board to jump off of and the best possible springboard was with that sword, because otherwise, if I’d had a bad experience, I don’t know. I would’ve gone right back to teaching that next semester. [laughs] But, because we worked out really well and it got me a good burst within the scene and a straight group of supportive fans, we’ve been there ever since, for the past 10 years.

There’s been ups and down, you know, from learning and growing pains and things like that, but I’d rather be doing this than anything else. We’re just very fortunate that, after 10 years, and through hell or high water through a global pandemic, people still want to come out to hear middle-aged men rap about nerdy things. It’s really a blessing. It really is.

You have a connection to Kansas City because you’ve done a few tracks with Kansas City musician Kadesh Flow. I’m curious as to how the two of you came to work together, originally.

Oh, man. Kadesh is my boy, man, I love him so much. He’s super-talented. Just an amazing musician. Plays the trombone and raps–everything at a really high skill level. I think that we were able to inspire each other. I remember when he was first starting out, he would send me messages and emails, just asking for tips on how to get things going and for advice how to stay motivated. Tips on how to stream content and get it heard. That’s really what it all comes down to.

It’s like, I know so many talented people, but not at his level, so watching his growth and evolution has been really good. We’ve done a bunch of collaborations. We’re in a collective together called the NPC, together, which came out of attending conventions and noticing that there aren’t a lot of people who look like us, then starting to just kind of research why maybe that was a lot of folks didn’t feel like they would see themselves represented in places like these.

Our collective is definitely focused on diversity. We come to conventions and give talks and panels and just talk to folks about diversifying in nerdy spaces. We both share a passion for that, as well as hip hop music, as well as jazz. There’s just so many things that we found a common ground on.

When I first heard about the NPC Collective, I was struck by the name, because NPC is such a powerful statement regarding where people of color find themselves in grander nerd-dom. That’s a very clear statement of purpose.

Yeah, absolutely. That was the goal there, the double meaning for a reason. For people who don’t know, an NPC is a “non-player character”–the bit player in the background. The character that maybe helps to progress the story that just isn’t mentioned or maybe doesn’t even have a name or a face, sometimes. It’s just a stepping stone on the way to where you need to get.

And I’m like, if that doesn’t encapsulate the experience of people of color, then I don’t know what else does, so it was definitely intentional and the work still has to be done. I mean, we we’ve come so far. I go to conventions now and I see faces of so many different backgrounds and I love it but, yeah–the still has to be done and we’re going to keep doing that.

Nerdcore can encapsulate so many different things. This forthcoming album, Live ’95, is such a great thing because I think when people think nerdcore hip hop, they think video games, anime, comic books, etcetera, but this is about basketball. While it’s not that you haven’t touched on sports before–you’ve put out an album that was based around professional wrestling, but I like the subversion of expectations about what this subject can be.

Yeah, for sure. That’s also very intentional. I don’t want anyone thinking nerdy things or hip hop means it has to be this one thing, or just represent one path in nerd-dom. I was just as nerdy about collecting trading cards as I was about anime or comic books. I could tell Michael Jordan’s point-per-game average over his first ten seasons particularly as I could tell you Scott Summer’s family lineage, you know? I was just as nerdy about these things and these things all helped to shape me.

People don’t think athletic competition is nerdy, you know, but I think that, you know, being passionate is really, at the end of the day, the meaning of a nerd-dom. It’s just things that you’re passionate about that help you get through the day and that was really my focus. I’m happy to bring another factor that contributes to the evolution of what what I’ve been able to do.

And it wasn’t the record, I would have felt comfortable with putting out ten years ago. I would have felt like, “Oh man, people gonna get scared of basketball and sports,” but I don’t care anymore. I was able to create something that I loved and I knew that supporters of me will love it and continue to listen and I think some of best work, so I’m super happy about.

Mega Ran, along with MC Lars, MC Frontalot, and Schaffer the Darklord, hits Encore at the Uptown Theater for the Four-Eyed Horsemen tour this Friday, October 22. Details on that show here.