Quite Frankly leans in to a new sound with “blue / red”

Their latest single and video shows a more mature side of one of KC’s youngest bands. 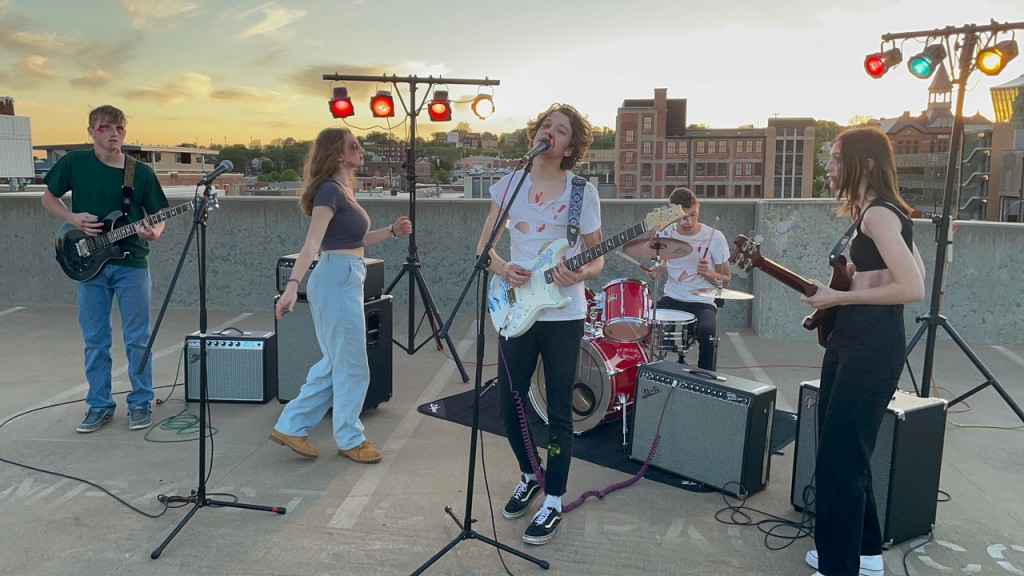 Like a lot of bands, Quite Frankly has gone through a few different iterations. When balancing paid gigs with homework, band practice, drama rehearsals, and real drama, you tend to go through a few members.

Quite Frankly originated in 2017 with bassist Scout Matthews-Tveit, who felt tired of being told what to play and which parents to cater to via a local branch of School of Rock. Her own parents collaborated with a few others, eventually deciding to invest in some serious sound equipment and take a leap of faith with a few other young musicians, also from School of Rock.

“The house band was disbanded because of a change in management, so I found other kids who wanted to play. We actually originally got in trouble for starting a band and involving everybody in something that wasn’t a School of Rock thing,” Scout says. “People were just coming up and asking me to join, but we got in trouble for excluding people.”

MJ remembers a lot of pushback and tense meetings around that time, but ultimately stands by her decision to allow the kids to play. 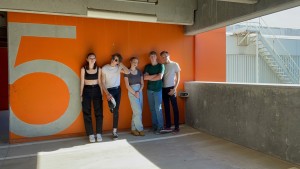 “I love when people tell me my kid shouldn’t have opportunities and cannot have a band, or that we can’t do these things without you… That just made me go ‘fuck you’. One of the families in response to that ended up giving us a check and said, ‘Go get what you need for sound. We don’t need them on board, we can do this’.”

“Gavin was actually in my first band. It’s kind of a natural thing at this point,” singer and multi-instrumentalist Jolson explained. The two grew up in a musical family settled in Osage City. “The thing about growing up in a small town is that you don’t have any other musicians, and I’ve been playing with my brother since I was 15.”

Earlier singles by the band like “Tear it Up” or “Volcano” have rock-heavy guitar riffs and an ever-young angsty bite, songs that reflect the stages of development the band was going through. Their newest single and first release of 2021 “blue / red” is a marked departure from their earlier sound and a more mature side of the band.

“Usually if I’m inviting friends out to a gig, it comes with a disclaimer. ‘You guys should come see my band, we fuckin’ rip, but keep in mind that they are all in high school and are all children,’” Jolson says. “It doesn’t embarrass me, it’s just that I’m at the point in my life where I’m past childhood, I can’t be quantified as a kid anymore. 20 feels really final in that way.”

The new track is about a relationship with some very serious power imbalances. The accompanying video shows the kids in various states of disarray as bruises and scratches begin to appear, an outward reflection on inner turmoil. The song was written in just 20 minutes after Peterson started playing a riff and Armstrong contributed a few lyrics. Jolson took it home and consequently completely forgot about it until prompted by a text at 5 a.m. the morning of rehearsals.

“He came in the next morning, so I asked if he had anything and he goes, ‘I have the fuckin’ lyrics, I just wrote the fuck out of this song, this song is fuckin’ awesome’,” MJ says. “I had asked Carolyn about it before because she had started writing something to help and she said, ‘Yeah, I think it’s supposed to be like a party on a Sunday! Like a happy party song!’, and instead it made this whole turn.” 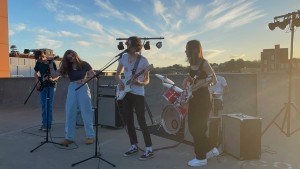 Jolson was feeling particularly inspired after breaking out of an abusive relationship. The lyrics, ‘playing songs on a Sunday, you keep calling but I don’t want to hear from you anymore,’ reference a rehearsal gone wrong when interrupted by endless calls from his ex.

“[Our director] Griffin Davis edited the video so that when you hear the lyrics, ‘Why’d you show up at my door tonight’, that’s when you see footage of the bruising. He really felt like that was the first punch,” says MJ.

The video was filmed at the KC Loves mural and shot using iPhones and a drone, per the rules of the Moment Invitational Film Festival. Winners will receive upwards of $150k in gear and prizes among nine categories, including music videos. Finalists will be announced at the premiere, a Livestream held June 26.

Until then, you can catch the premiere of the video live with the band at Josey Records to celebrate Record Store Day June 12 or watch the video on YouTube.