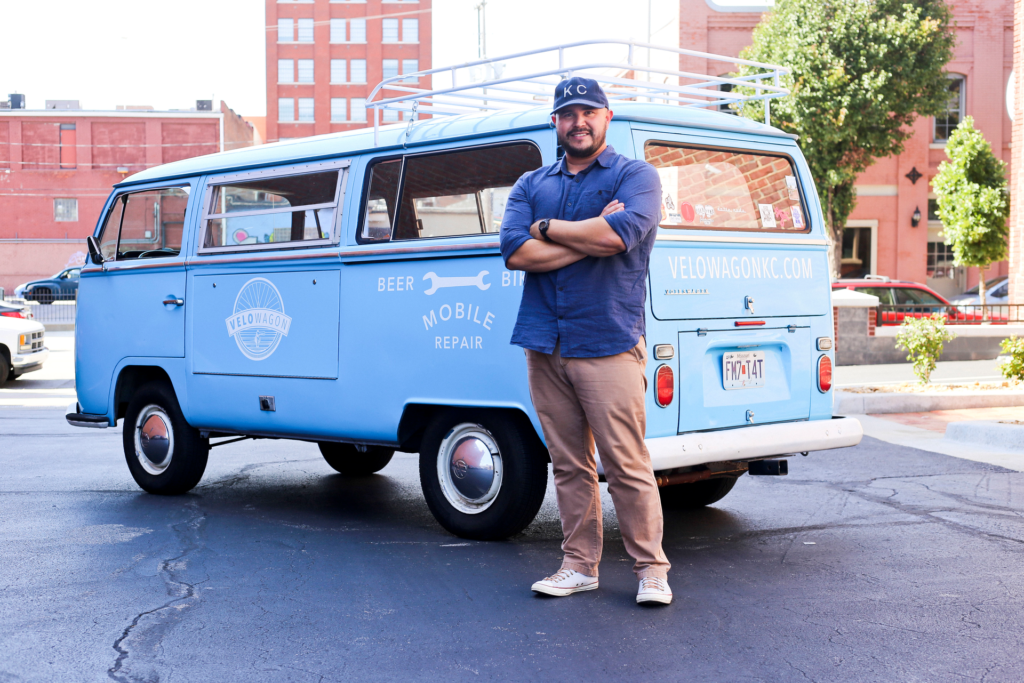 Occupation: I own the VeloWagon, KC’s mobile bicycle repair service with beer taps in a 1969 VW bus. It’s a labor of love.

What I do (in 140 characters): We turn parties and events up to 11 with the VeloWagon. I also do mobile bicycle repair, SAG bicycle rides, and anything else that sounds like a fun time.

What’s your addiction? Browsing the thesamba.com for air cooled VWs.

What’s your game? Wiffle ball. I can throw a mean curveball. I also tried to get a KC league going on Meetup once. Something tells me that’s not really what that site is about.

What’s your drink? Beer, especially from local breweries that I visit when traveling. Right now I’m a huge fan of the Amarillo Rojo from Taos Mesa Brewery in Taos, New Mexico.

Where’s dinner? At home. My wife is an amazing cook. She also makes sure I eat a lot more vegetables than I would at a restaurant.

What’s on your KC postcard? The shuttlecocks on the Nelson-Atkins lawn.

Finish these sentences: “Kansas City got it right when …” it built the streetcar.

“Kansas City screwed up when …” the original streetcar route ended in 1957.

“In five years, I’ll be …” expanding a fleet of VeloWagon’s across the country … slowly. They only have 40-hp engines, but it’s about the journey not the destination.

“I always laugh at …” Catastrophe on Amazon Prime. Currently it’s one of my favorites. Although Curb Your Enthusiasm is always good for a laugh. I like humor based on uncomfortable situations.

“I can’t stop listening to …” Jason Isbell and David Ramirez

“My dream concert lineup is …” Bob Dylan on the Rolling Thunder Revue tour, and Neil Young.

“I just read …” Sick in the Head by Judd Apatow. It a collection of interviews he’s done over the years with comedians. Comedians are deeper than they appear.

What’s your hidden talent? I’m a pretty good shot with a rifle. My parents live in the country in Oklahoma. My dad likes to do target practice when we get to visit.

Worst advice? Don’t make waves. I think making waves is a great thing — just don’t be an asshole while doing it.

My sidekick? My wife, Alissa, and our dog, Guinness.

What is your spirit animal? I think it’s probably a Charmander.

Who is your hero? My dad will always be my hero. If I am half the man he is, I’m doing good.

Who (or what) is your nemesis? Right now, it’s the team I’m facing in fantasy football this week.

My favorite toy as a child: My bike that was inspired by the movie E.T.

My dating triumph/tragedy? My all-time greatest dating triumph is landing my wife. I knew I was going to marry her the first time we met. It’d take her a year or two to realize that herself, though.

My brush with fame: My roommate in college is the frontman for Broncho. You may not know who they are now, but you will.

My soapbox: As a former teacher, my soapbox will always be about every kid having access to education that works. I’m a huge supporter of initiatives that expand educational opportunities for young people.

What was the last thing you had to apologize for? Eating nachos last night instead of a healthy dinner.

Who’s sorry now? I am. Way too spicy!

My recent triumph: Convincing my wife to go on a bike ride in New Mexico recently. It ended up being more like carrying bikes up 1,200 feet of hiking trails. She’s a trouper, and I think she might be down to “bike” again.