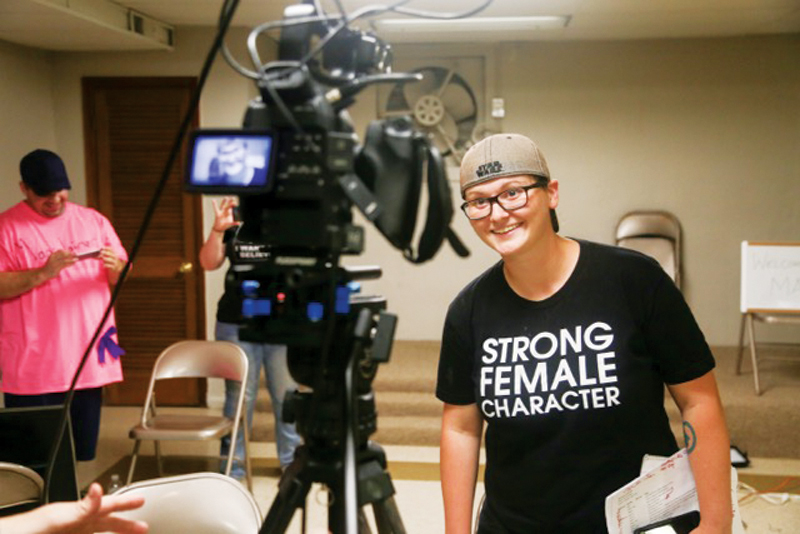 What I do (in 140 characters or less): I take playing pretend really seriously.

What’s your addiction? Writing “xo” at the end of long messages to people. It started ironically, but now I’m a monster and can’t stop.

What’s your game? I play a game where I look at strangers and figure out which actor they look like.

What’s your drink? White sangria. It used to be tequila, but I ruined that for myself.

Where’s dinner? In LFK, I can’t get enough Burger Stand. When I’m in KC, it’s almost always a burger from the Buffalo Room at the Westport Flea Market.

“As a kid, I wanted to be … ” The general manager for the Washington Wizards. Don’t ask.

“I always laugh at … ” Brooklyn 99. Everything about that show is wonderful and hilarious.

“I’ve been known to binge-watch … ” All irreverent comedies. It’s a form of self-care.

“I can’t stop listening to … ” The Streets of Fire soundtrack. It’s impossible to not get stoked while listening to it.

“My dream concert lineup is …” Bleachers and every artist who covered one of the band’s songs on Terrible Thrills, Vol. 2. I’m obsessed with Jack Antonoff’s songwriting. Taylor Swift and all of the other artists he collaborates with are welcome, too.

“I just read … ” Anna Kendrick’s book Scrappy Little Nobody. Well, I listened to the audiobook.

What’s your guiltiest pleasure? I don’t believe in guilty pleasures. I feel no shame for my love of Fuller House, okay?

The best advice I ever got: “Help yourself.”

Worst advice? Someone of influence in the film industry once told me that if I wasn’t shooting my movies on film stock, I was only making artless “videos.” Super elitist, classist and pretentious.

My sidekick? My pug, Teddy

Who is your hero? My mom. She’s overcome a lot of adversity in her life. She was a single parent for a long time and I really admire her. Anyone who knows her should feel lucky.

Who (or what) is your nemesis? Fascism

What’s your greatest struggle right now? Dealing with the current political climate. I grew up during the Obama years; it was a privilege in its own right. This is a terrifying time, but there is hope seeing the consistent direct action from activists. I wish more citizens had engaged in activism earlier; maybe we wouldn’t be in this mess. People who participate in direct action for the Women’s March also need to show up for Black Lives Matter events. It’s important to be intersectional in our fight against oppression.

My favorite toy as a child: I had a Po doll from Teletubbies that would say homophobic epithets and sing, “Bite my butt.” The ’90s were wild, apparently.

My dating triumph/tragedy: I’ve been in love with my partner since I was 17. We became best friends almost instantly. We’ve been together for two and a half years now, still going strong. I’m very lucky to have such a supportive, wonderful person in my life.

My brush with fame: After one of my screenings at Kansas City FilmFest last year, someone told me there might be a get-together at a hotel bar. I left and looked for the hotel for 20 minutes before asking a couple for directions. The couple turned out to be Don Cheadle and his partner. He was receiving a big award that day from the festival and apparently everyone was trying to meet him. I wasn’t starstruck; I really just wanted to hang out with my friends after the festival. He seemed very reluctant to give me directions, but his partner was gracious and told me they were headed there.

So, for the next few minutes we made some small talk about Chi-Raq and if he was enjoying the festival. Conversation was polite but terse. We ended up in the elevator together and made some more small talk. He pointed to my festival badge and asked if I was a volunteer. His face looked so relieved when I told him I was a director; I’m guessing it made him feel more confident I wasn’t some stalker. The conversation was much more upbeat for the rest of the elevator ride, then we all parted ways and said goodnight.

I walked in the opposite direction to the bar. Naturally, the bar was empty and there was no get together after all. Really sorry about following you back to your hotel for no reason, Don Cheadle.

My soapbox: Everyone needs to watch Ladies and Gentlemen, The Fabulous Stains. The story of the movie’s production is endlessly fascinating, but it’s also a great film. It stars Diane Lane and Laura Dern when they were maybe 15. Diane Lane plays this little badass named Corinne Burns who starts a terrible (yet amazing) punk band called the Stains and a feminist revolution. Sarah Jacobson did a great documentary piece about the production of the film and how it wasn’t given a home-video release until about 20 years after the fact. Ten out of 10: highly recommend all of it.

What was the last thing you had to apologize for? This question implies I’ve made a mistake before.

Who’s sorry now? Homophobes I went to junior high and high school with. Admittedly, their homophobic epithets were less cute than that Po doll. Also, they’re probably not sorry.

My recent triumph: Sometimes waking up and dealing with the weight of a fascist autocracy is a triumph in and of itself.