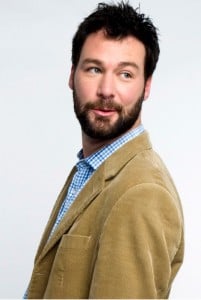 Named one of “10 comics to watch” by Variety Ottawa-born comedian host and actor Jon Dore is renowned for his offbeat humour and unique bait-and-switch style.

Dore is a favourite on the comedy club and festival circuit in Canada and the United States. He has hosted the Just for Laughs Festival Homegrown Comedy Competition on a number of occasions and has enjoyed sold-out runs at the Festival’s Montreal and Toronto locations at comedy festivals in Halifax Vancouver Portland and Washington DC and at the Bonnaroo Music and Arts Festival in Manchester Tennessee.

From his humble beginnings as the co-host of the cable talk show Daytime Ottawa (Rogers Television) and the irreverent roving reporter on Canadian Idol (CTV) Dore recently starred in the critically acclaimed ABC-TV series How to Live with Your Parents (for the Rest of Your Life) opposite Sarah Chalke, Elizabeth Perkins and Brad Garrett.

Dore is the host of HBO Canada’s Funny as Hell a series showcasing bold and uncensored comedy from the fastest rising comedians at the Just For Laughs Festival currently shooting its’ fourth season.

He is the star of his own award-winning ‘mockumentary’ series The Jon Dore Television Show documenting his hilarious and outrageous debates on life’s challenges and changes from weight loss to gender. He also served as co-creator co-producer and writer on the series proving he is just as comfortable behind the camera. The series ran for a successful two seasons on IFC and The Comedy Network.

Dore starred in the stand-up specials Comedy Central Presents…Jon Dore and Comedy Now! (CTV/The Comedy Network); appeared on a number Comedy Central’s specials including Live At Gotham CC: Stand-Up: The Bonnaroo Experience and Mash Up; made guest-starring turns on How I Met Your Mother (CBS) and Scare Tactics (SyFy); and was the lead in the CBS pilot My Life As An Experiment.

A regular on late night talk shows Dore has the honor of being the first stand-up to appear on Conan (TBS).