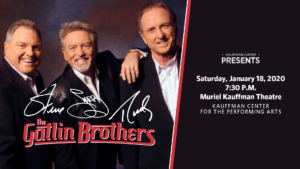 In addition to notable accolades, the Gatlin Brothers have entertained audiences in some of the world’ most famous venues, including the Grand Ole Opry, Carnegie Hall, Madison Square Garden, and The Lincoln Theater. They have performed for the GRAMMY Awards, the American Music Awards, and the People’s Choice Awards. They appeared on The Tonight Show with Johnny Carson, Oprah, Hee-Haw, Love Boat, the Midnight Special with Wolfman Jack, the Merv Griffin Show, Solid Gold, the Barbara Mandrell Show, and their own variety special on ABC.